Skip to content
Home » Travel » Is it Safe to Travel to Brussels? My Thoughts, Advice and Things to Do in Brussels

Traveling throughout Europe last summer has made recent events in Paris and Brussels hit a little closer to home.  The possibility of terror attacks and concerns about staying safe while traveling abroad were constantly running through my mind as we planned our trip and as we traveled through foreign airports, train depots, and on every type of public transportation imaginable.  Not only were the forms of transportation we were using more vulnerable to threats than our usual transportation at home, but we spent much of our time in heavily populated tourist hot spots and visiting high profile attractions.  Just weeks after we returned home, the EXACT train that we had taken from Amsterdam to Paris was attacked.    In November, everyone watched the horror of the attacks in Paris on the Bataclan Concert Hall and neighborhood restaurants, which were all along streets we had been walking and just blocks from where we stayed during our time in Paris.  Then the Brussels airport attack.  We spent several days in Belgium and traveled through it on a few occasions, including a lengthy layover that we had at the Brussels airport.  In all honesty I felt pretty vulnerable during much of our three months abroad.  It was shocking to come home after traveling to more than 14 countries with only 3 stamps in our passports.  We crossed borders time and time again without anyone knowing who we were, where we were coming from or what purpose we had in being there.  We boarded international trains without any security.  There IS no security.  You take a cab to the train station and hop on your train.  No luggage checks, no passport checks, nothing.  We entered high profile tourist sites with no metal detectors, carrying backpacks and bags full of stuff.  We attended large festivals and city events where huge crowds were gathered with no police in sight.  I realize now, more than ever, that we were clearly in areas and visiting places where we were vulnerable. I have been wanting to write a post about things to do in Brussels and our experience there, but debated whether this was a good time or not.  I have decided to go ahead and share, along with some of my thoughts and advice for traveling abroad right now with current worldwide travel alerts in effect. 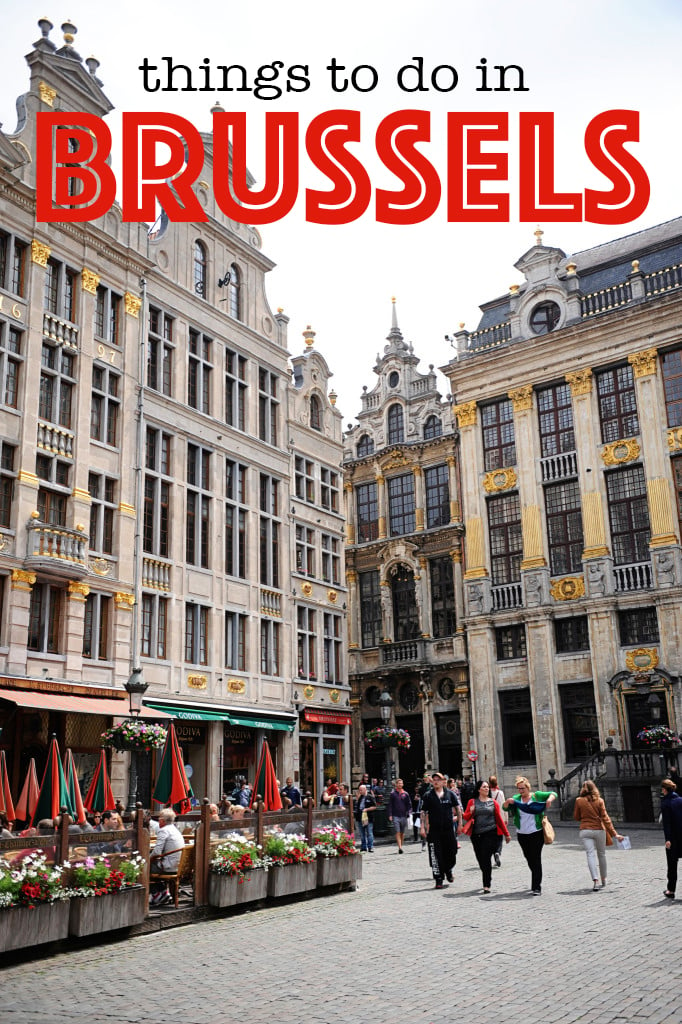 When we were making our initial itinerary, I frankly wasn’t even sure that we needed to visit Brussels.  Our friends who have visited Brussels and live in London, suggested that we really only needed a few hours to see the main points of interest there, so we decided that it would be an easy stop on our train trip from Amsterdam to Paris.  Rick Steves has suggested that the Brussels historic city center is one of the most beautiful in all of Europe too, so we decided to stop and see it.  We arrived at the Brussels Midi train station, parked our bags in lockers at the train station, and set out to visit the sites. 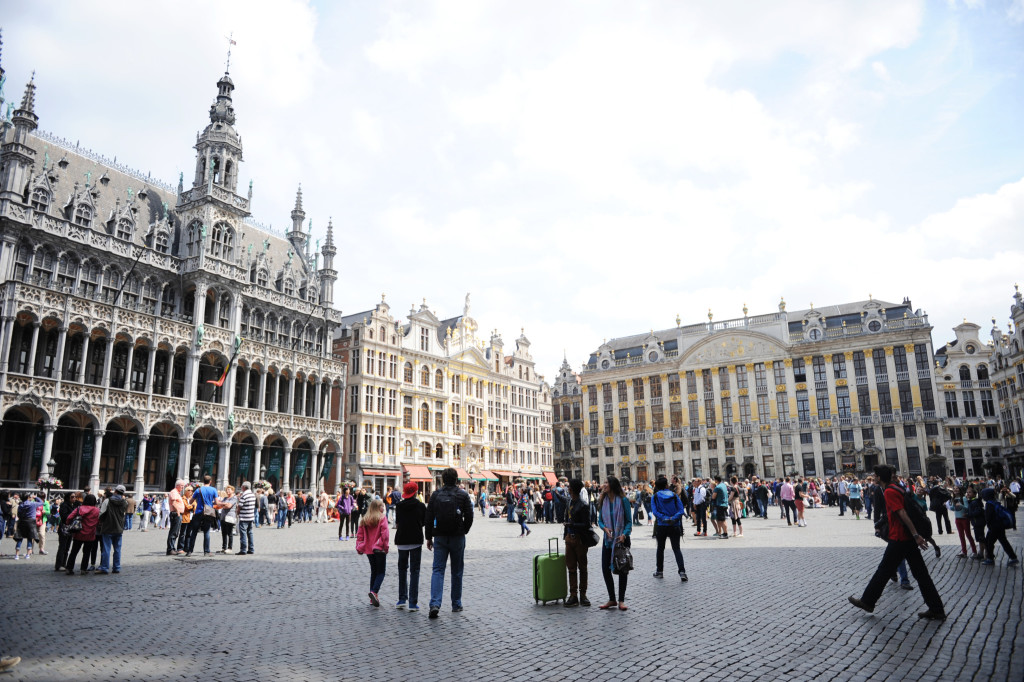 Without even realizing that Brussels was somewhat of a terror hot spot at the time, I immediately noticed that it felt “different.”  I felt less safe in Brussels than anywhere else we had traveled up to that point, and frankly, even seeing a shake down of a street vendor by the mob take place less than 6 feet from me one night while in Rome didn’t make me feel the way that walking around Brussels felt.    It was in Brussels that we encountered really the only Gypsies of our entire trip, and walking through the streets I felt more like a target for thieves and petty theft than in other cities.

After we had our bags stowed at the train station we walked a few quick blocks to St. Michael’s Cathedral. 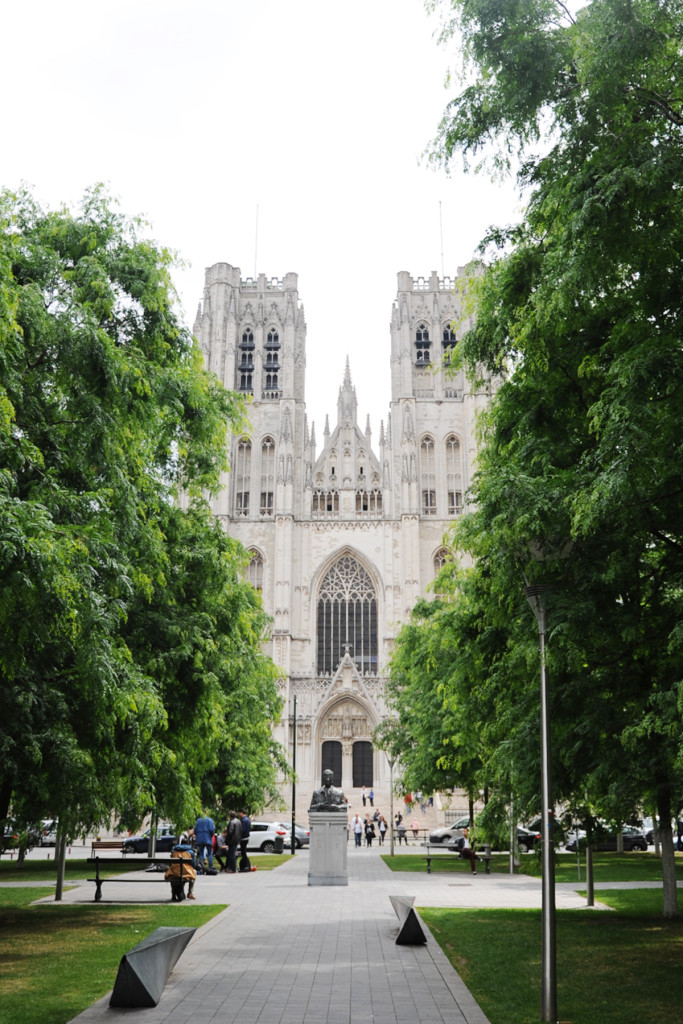 The Gothic style cathedral dates back to the 8th or 9th century and is every bit as magnificent as other famous Gothic structures throughout Europe.  Admission is free and we wandered through the building for about 45 minutes.  We did not head down to the basement, but if you are inclined to do so, for only about 1 Euro you can see the ruins of the original church built in 1047.   The stained glass is gorgeous and it is definitely worth at least walking through if you are in Brussels. 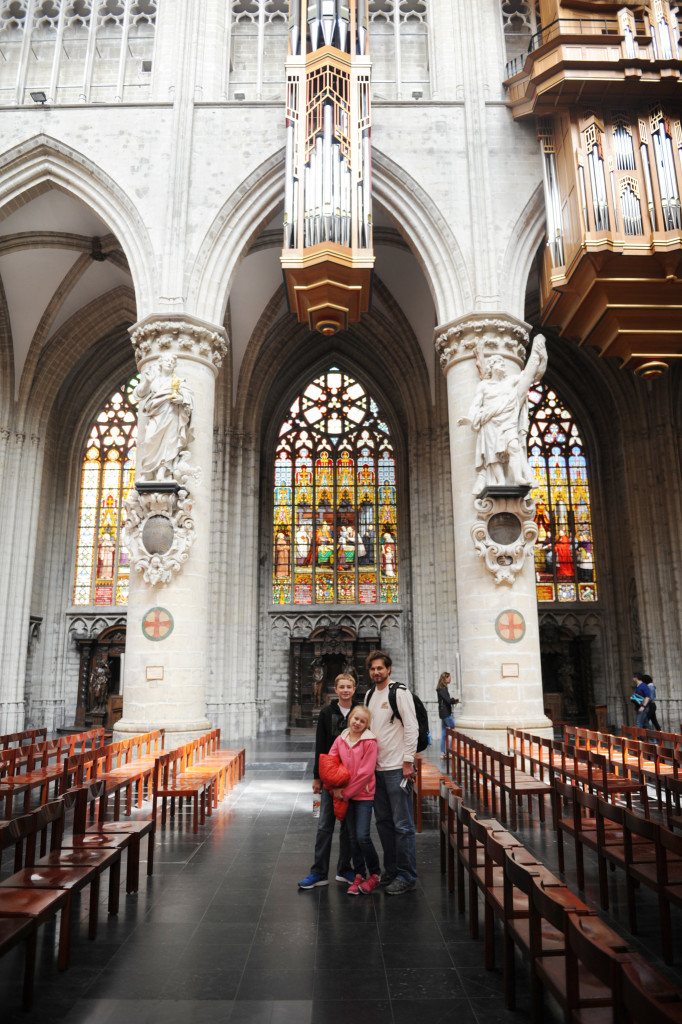 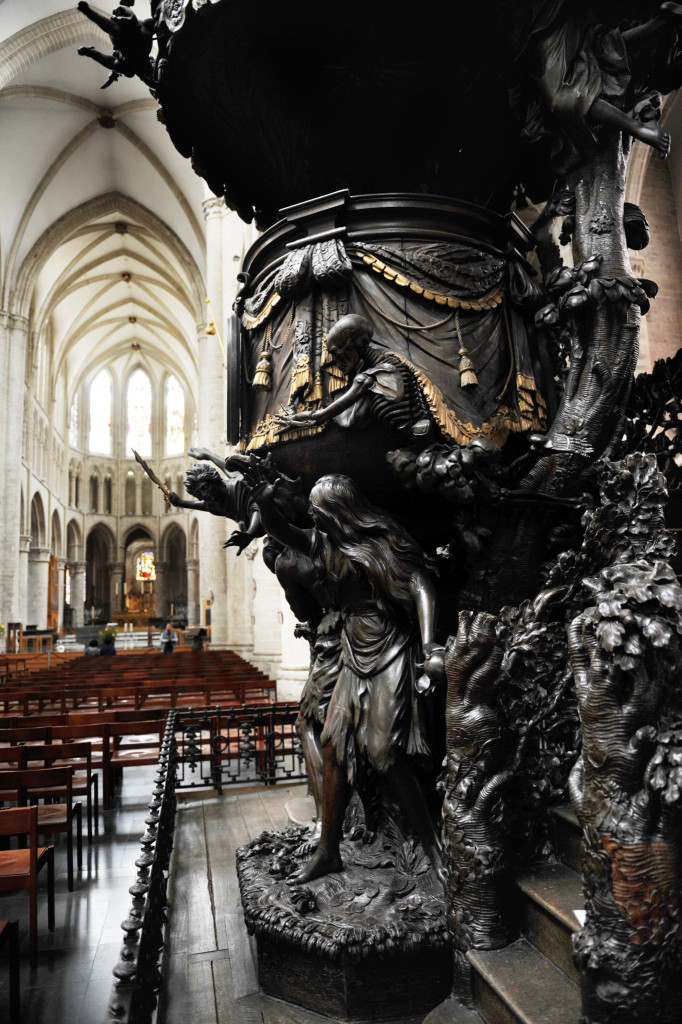 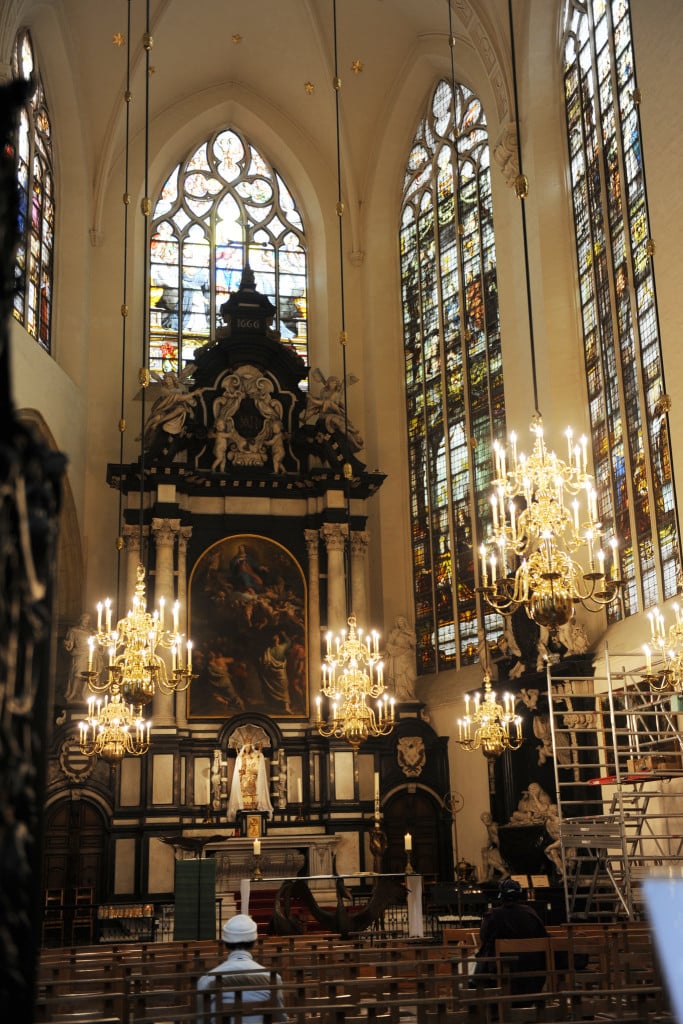 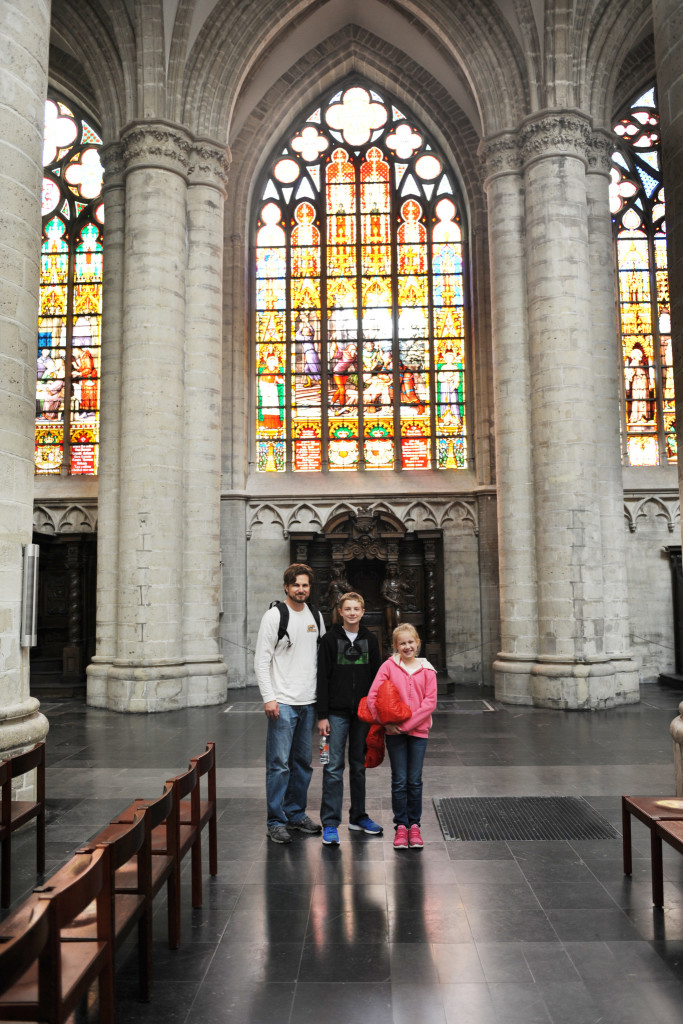 Across the park in front of the cathedral and just a block or so away and you are in the heart of the Brussels historic city center, in the Le Grand Place, truly a magnificent town square. Each of the buildings are dripping with gold and flowers and it is a beautiful place to grab lunch.  We found a pretty little cafe where we stopped to eat and watch the world go by, and John was happy to find mussels on the menu so he could say he ate mussels in Brussels. 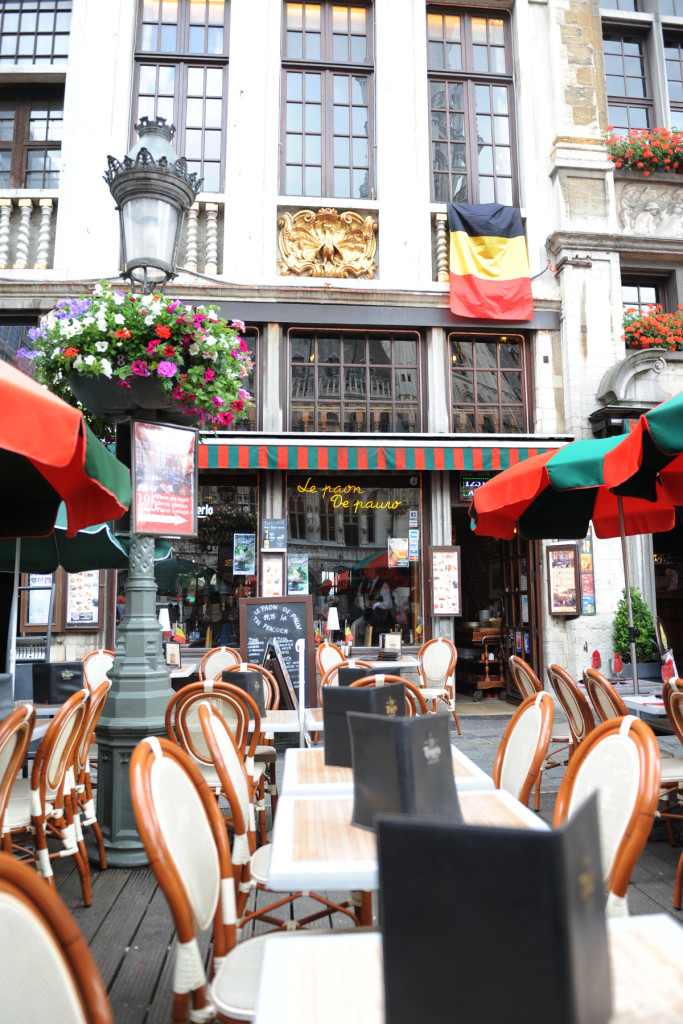 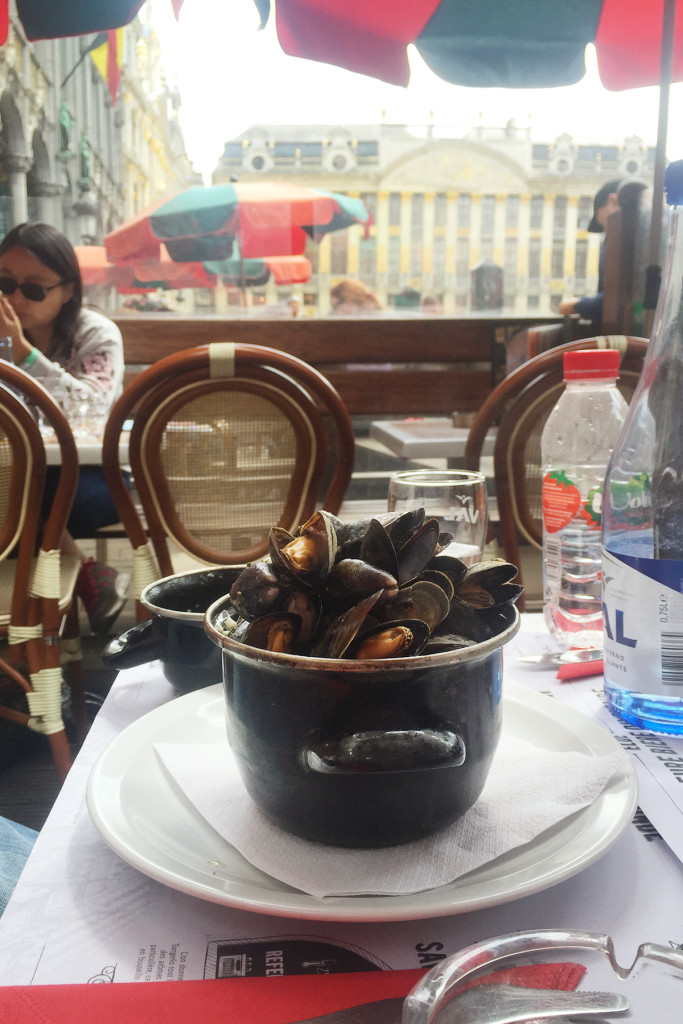 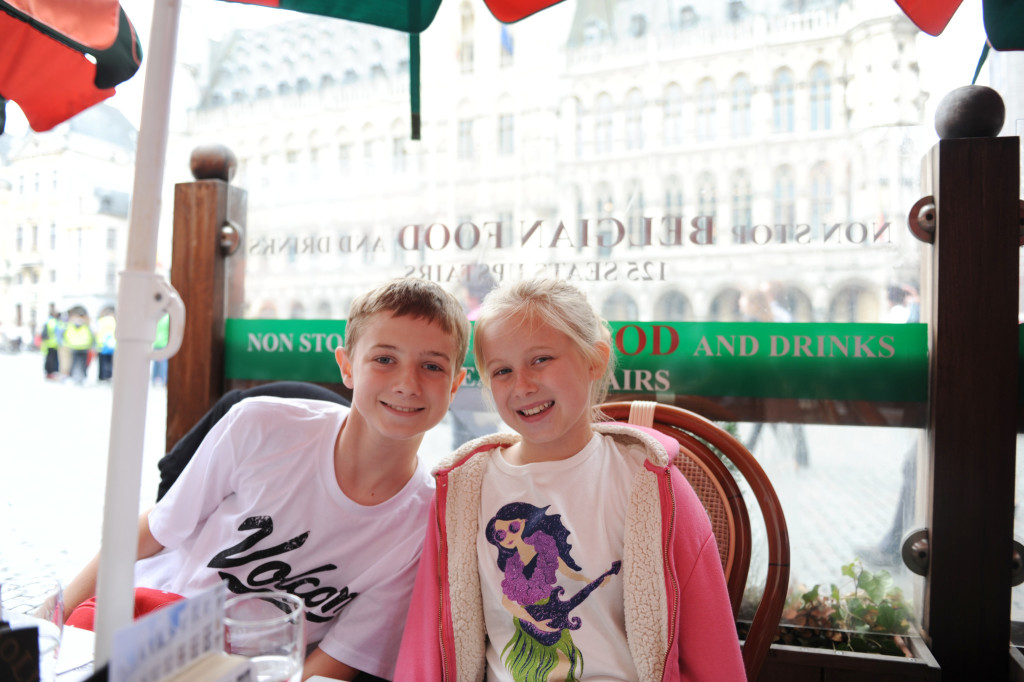 The Le Grand Place is beautiful and full of history.  The buildings date from the 14th to the 17th century and is a stunning mix of architectural and artistic styles. 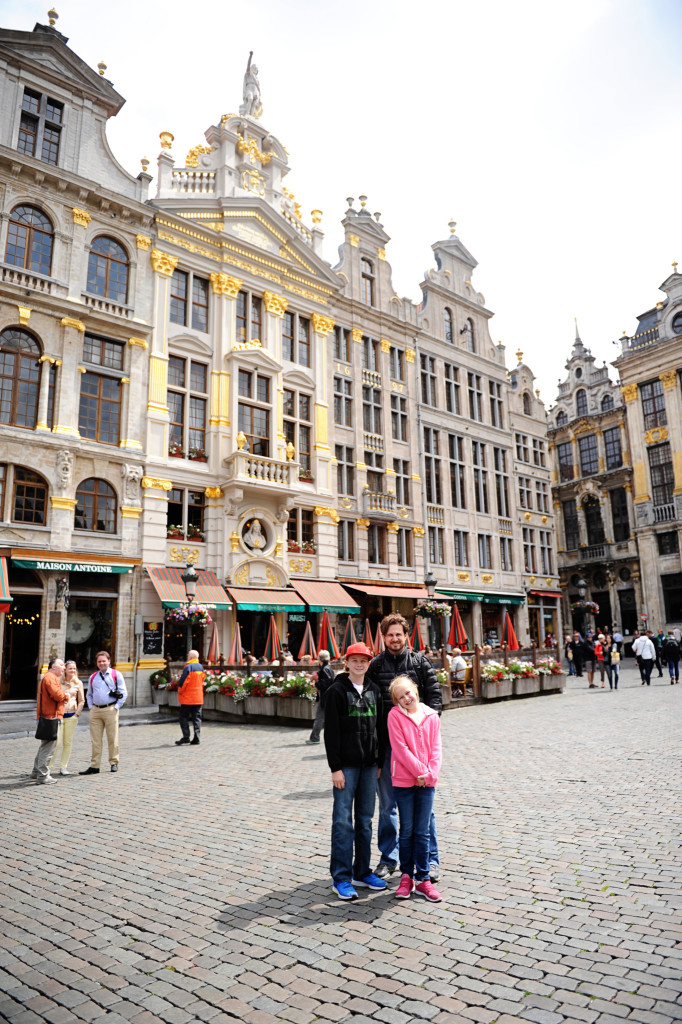 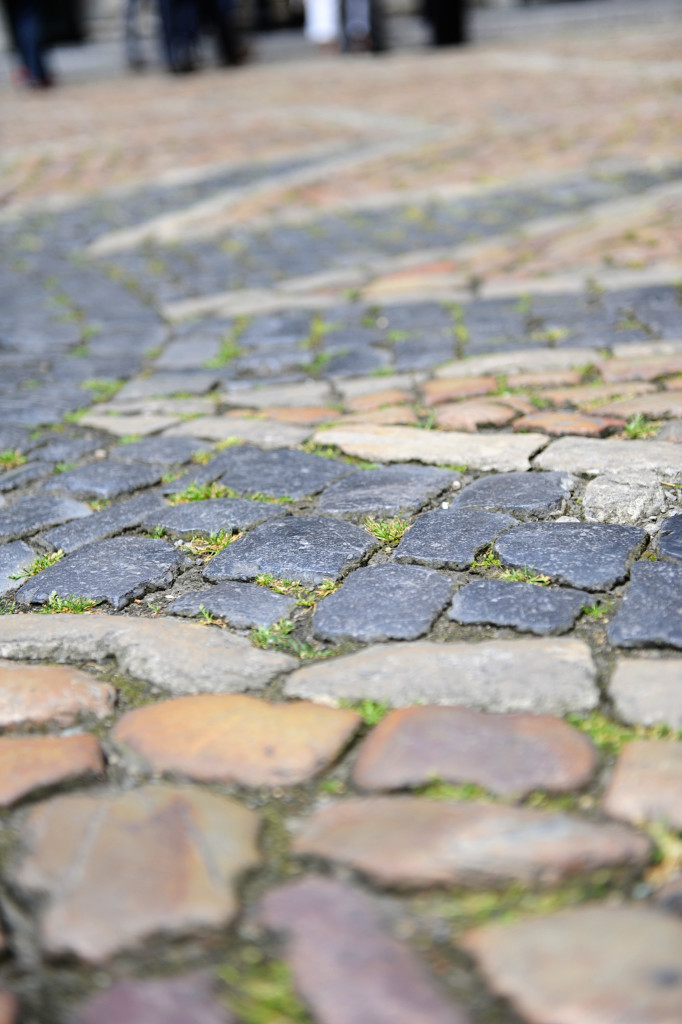 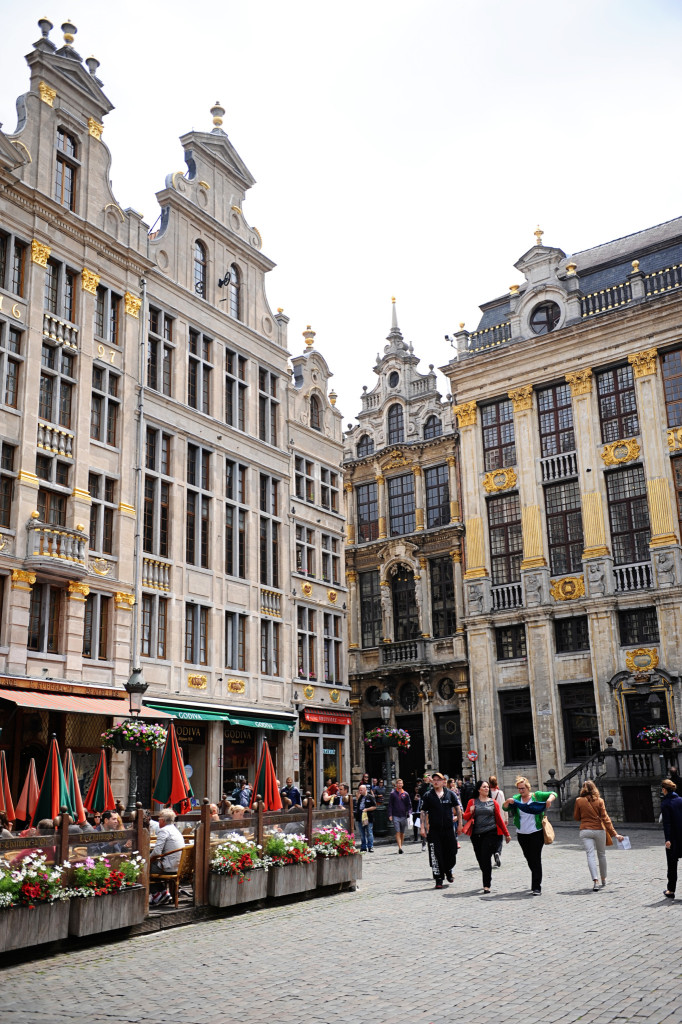 Like any beautiful European historic center, it is swarming with tourists and street vendors.  The blocks surrounding the town square are full of shops and restaurants catering to tourists.  About two blocks down from the square is one of Brussels’ most well known attractions that the kids love and everyone wants to take a selfie with… the Manneken Pis.  Designed and put into place in the early 1600s the fountain depicts a little boy urinating into the fountain’s basin.  Tacky, but funny- it is easy to find with crowds gathered around fighting for the chance to take a picture. 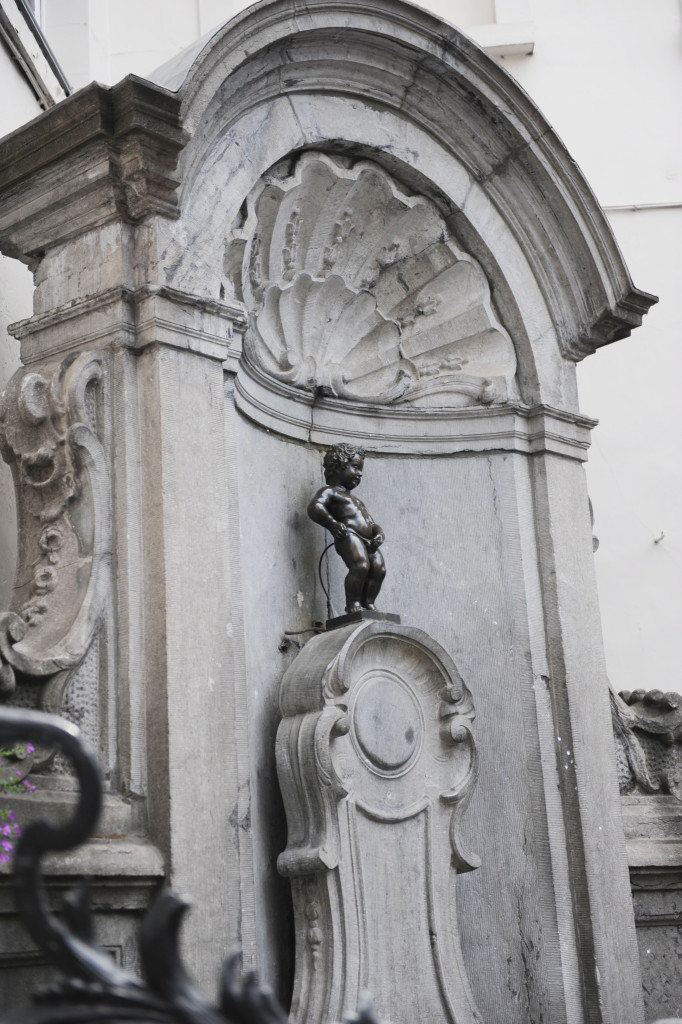 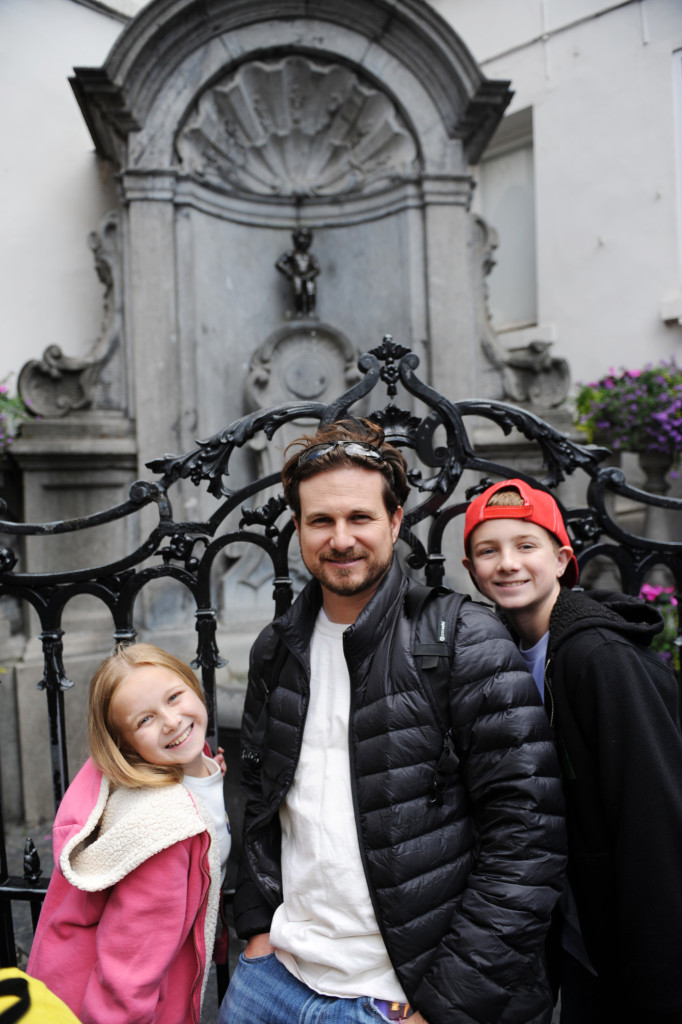 Frites and chocolates abound in Brussels, but of all the things to do in Brussels, you’ll want to make sure you grab a waffle.  The traditional way to eat a waffle in Belgium is plain.  There are shops that will sell them with toppings galore, but that is actually for the tourists who think of a Belgian waffle as a fruit, cream and chocolate topped breakfast treat. 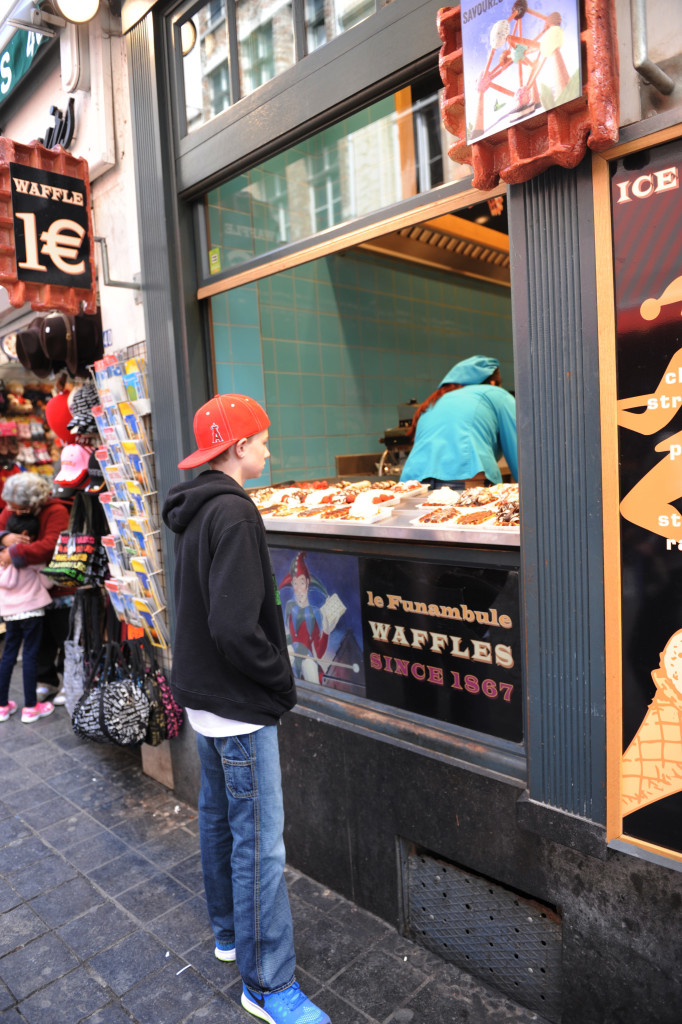 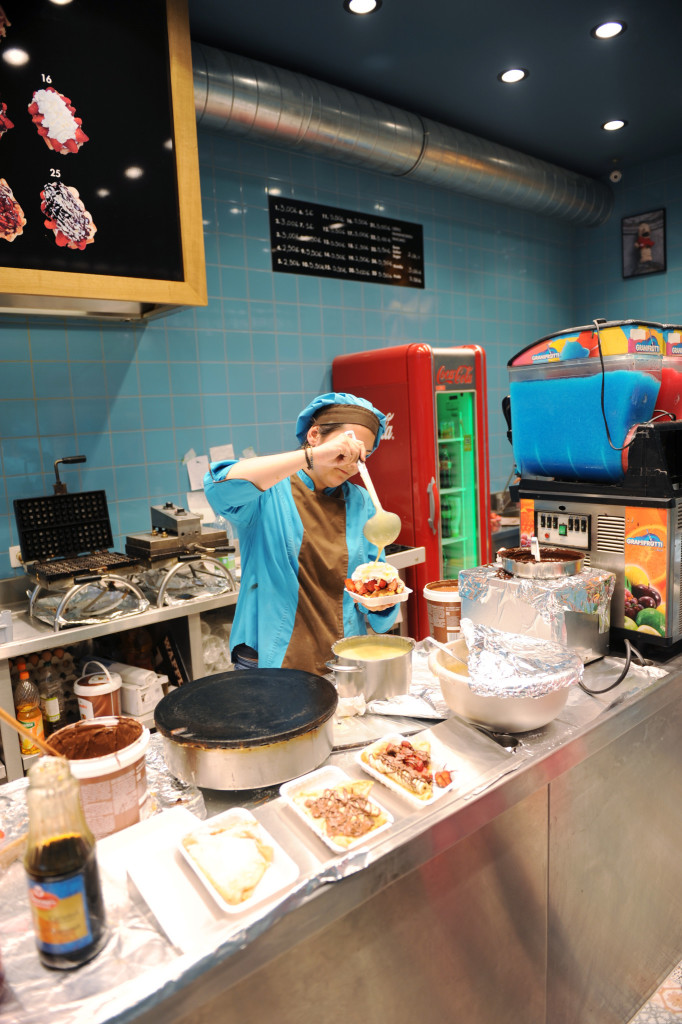 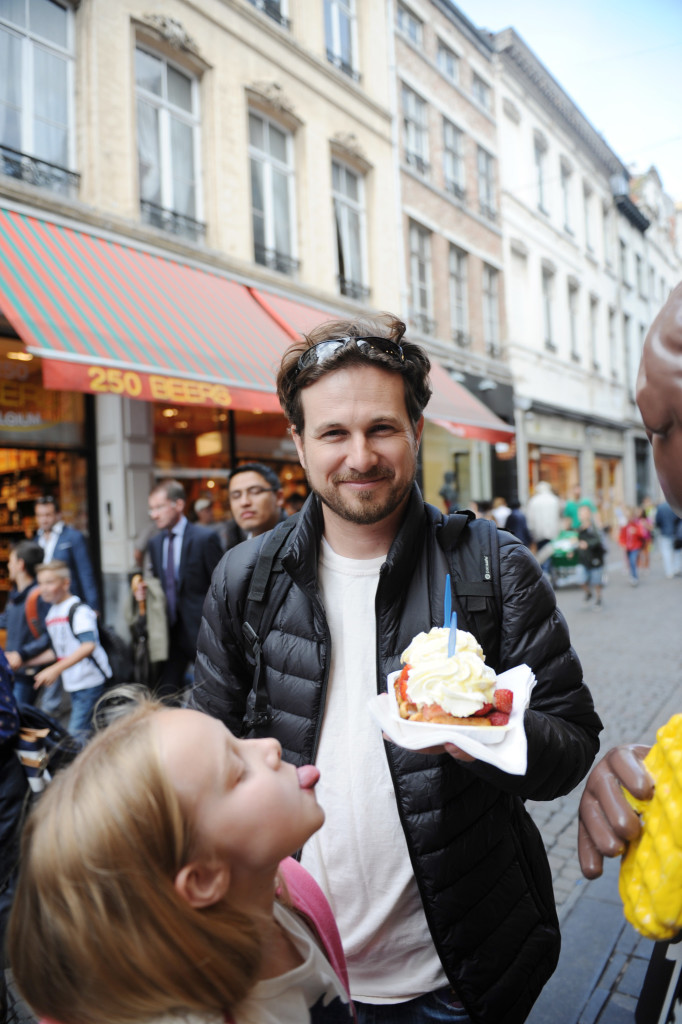 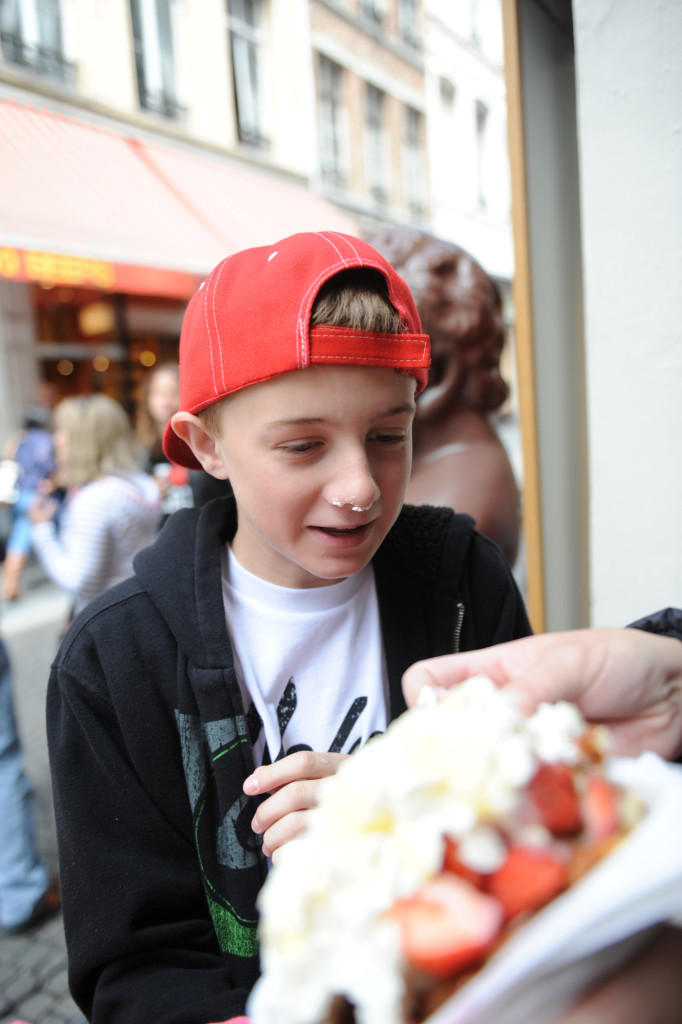 Of course they are yummy with the fruit and cream, but I would give anything to have a plain, authentic Belgian waffle right about now.  They are made with a yeast based dough that is cooked in a super heavy, cast iron waffle maker.  The dough is full of pearl sugar, which is small, pebble sized clumps of white sugar.  When it is cooked in the cast iron waffle maker, the super hot temperatures and weight of the cast iron cause the sugar pearls to melt and caramelize on the outside of the waffle.  It is divine! 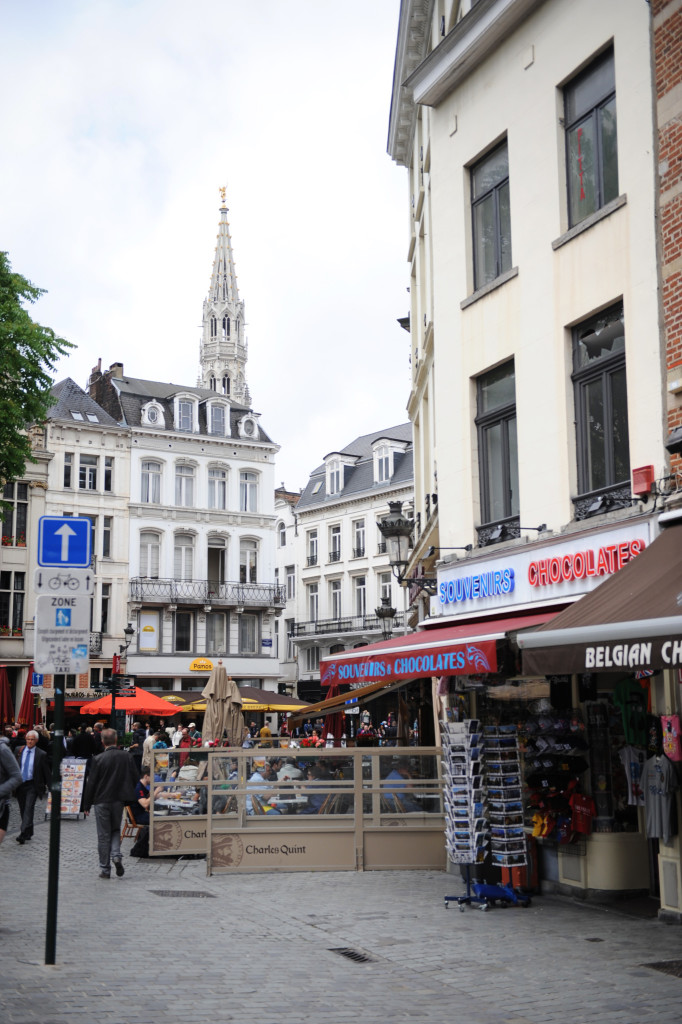 In total we spent about 3 hours in Brussels.  Am I glad I went?  Sure, I wanted to see everything I could.

Would I go again even without the increased terror threats?  Probably not.

Would I go with the current terror threat levels…no.

With the current worldwide travel alert and the issues that have involved Brussels in particular, I don’t personally feel like it is worth the trip.  It is a beautiful town square, but I feel like there are many other beautiful places to visit in Belgium that have much more to offer and are super charming…like fairy-tale charming.  A big benefit I see to spending time in these smaller cities in Belgium is that while they are big tourist destinations, they are also a bit more off the beaten path, hopefully making them a bit more secure.  Coming up I will share our visit to Brugge and you can decide for yourself.

The current travel alert from the US State Department (at the time this is being published) reads:

“The State Department alerts U.S. citizens to potential risks of travel to and throughout Europe following several terrorist attacks, including the March 22 attacks in Brussels claimed by ISIL. Terrorist groups continue to plan near-term attacks throughout Europe, targeting sporting events, tourist sites, restaurants, and transportation.  This Travel Alert expires on June 20, 2016.
U.S. citizens should exercise vigilance when in public places or using mass transportation. Be aware of immediate surroundings and avoid crowded places. Exercise particular caution during religious holidays and at large festivals or events.”
I am still in favor of traveling to Europe, and by all means if you already have a trip planned I would go.  However, I would do things a bit differently now.  I would probably avoid public transportation as much as possible.  I will cover this more in an upcoming post, but one of the most rewarding and enjoyable parts of our trip was actually having a car.  We thoroughly enjoyed the freedom of having the car and the experiences that being outside the big cities and exploring the smaller towns provided.
I would be more aware of the location of the embassies in the cities I was visiting.  I would enroll in the Smart Traveler Enrollment Program (S.T.E.P.) to register my travels with the closest U.S. Embassy or Consulate in the cities I am visiting so that I receive the most up to date information and alerts and so that they are aware that I am there in case of an emergency.
Bottom line: unfortunately I think we are living in a world where these threats are going to be consistent and probably increasing from here on out.  We will have to grow increasingly comfortable with being smart travelers and accept the risks that come along with exploring the world.  I don’t like to feel like these unfortunate events can change the way I do things, but in reality, they do affect each of our daily lives.  Just look at how much different travel has been since 9/11.  There is a new normal and we have to decide how we are going to react and adjust to it.
If you find yourself visiting Brussels and are looking for places to stay, Hilton has a few hotels in city as well, including the Grand Place which is located very close to all of the sites to see in town.
I’m sure there are many others that are great.  I would start with a Travelocity or Priceline search and read reviews. 🙂

Tammy Mitchell is the founder and creative director of lifestyle blog pinkpeppermintdesign.com. Along with being a homeschooling mom of two kiddos, she is also an in-demand prop and event stylist, photographer, interior and graphic designer. Here on Pink Peppermint Design, she aims to share creative DIY projects, easy entertaining and gift ideas, inspiring interiors and events, as well as her life, with thousands of readers every month. She lives in Southern California, with her husband and two children.
Power Bio Box by HOI
Author:
Tammy
Categories:
Mentions:
belgium, brussels, is it safe to go to belgium, is it safe to go to brussels, is it safe to travel to belgium, is it safe to visit brussels, things to do in brussels, things to see in brussels, traveling to brussels
Keywords:
things to do in brussels
Last Updated:
November 15, 2018

3 thoughts on “Is it Safe to Travel to Brussels? My Thoughts, Advice and Things to Do in Brussels”