I had been to Paris before, but I had never visited the Sacre Coeur.  This time, we made it a point to visit the Basilica located in the Montamarte, on the summit of the butte Montmartre, the highest point in the city.  The Montmarte is a bit of a gritty neighborhood and it was interesting to walk through it and see what a more normal neighborhood in Paris looks like.  (It’s also on my list of more off the beaten path places to shop in Paris where you can find all kinds of knick-knacks and cheap souvenirs)  I didn’t know much about the church, but because pretty much everything else in Paris seems so old, I assumed this cathedral was ancient too, so it was interesting to learn that the Sacre Coeur was actually built in the late 1800’s.  The history of the cathedral is an interesting one.  In 1870 war broke out between France and Germany. The Council that was being held in the Vatican at the time was suspended and the Pope, no longer under the protection of French troops, considered himself a prisoner within the Vatican. France was defeated and partially occupied by German troops. They vowed to build a church dedicated to the Sacred Heart “as reparation” and penance for infidelity and sin.  They believed that the reason they had been defeated and that France was experiencing such great misfortune had spiritual rather than political causes. 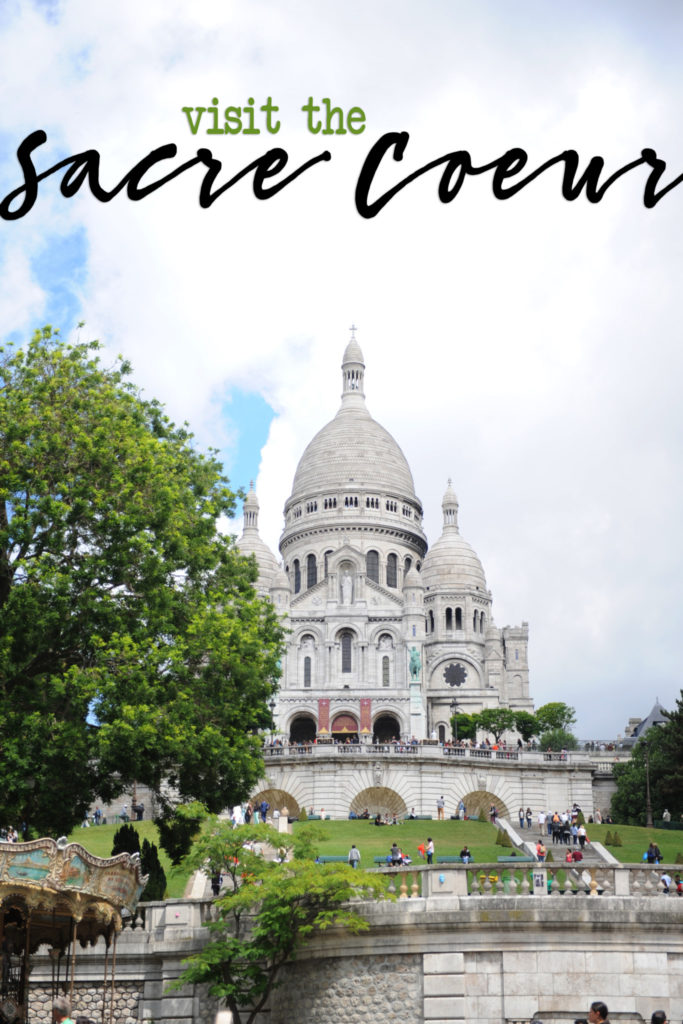 Because the Sacre Coeur is located on the highest point in Paris, you can be prepared to either hike lots of stairs or pay a small fee to ride the funicular to the top of the hill.  There can be long lines to ride the funicular, but it is definitely worth the wait and the fee!  Walking down the stairs is no big deal, so you only need to purchase a one way ticket. 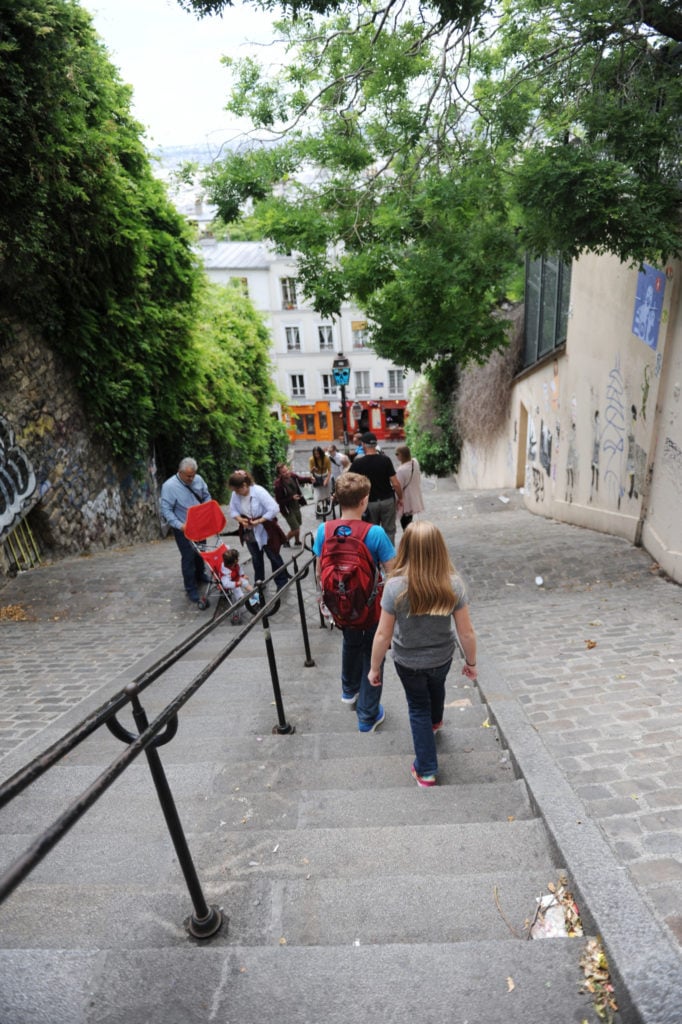 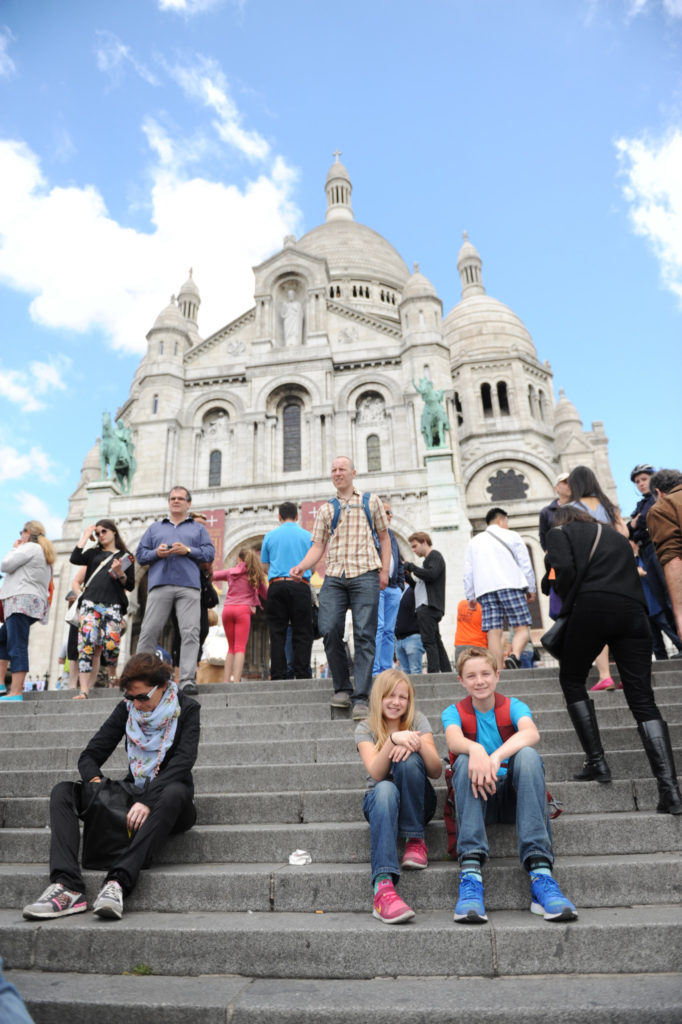 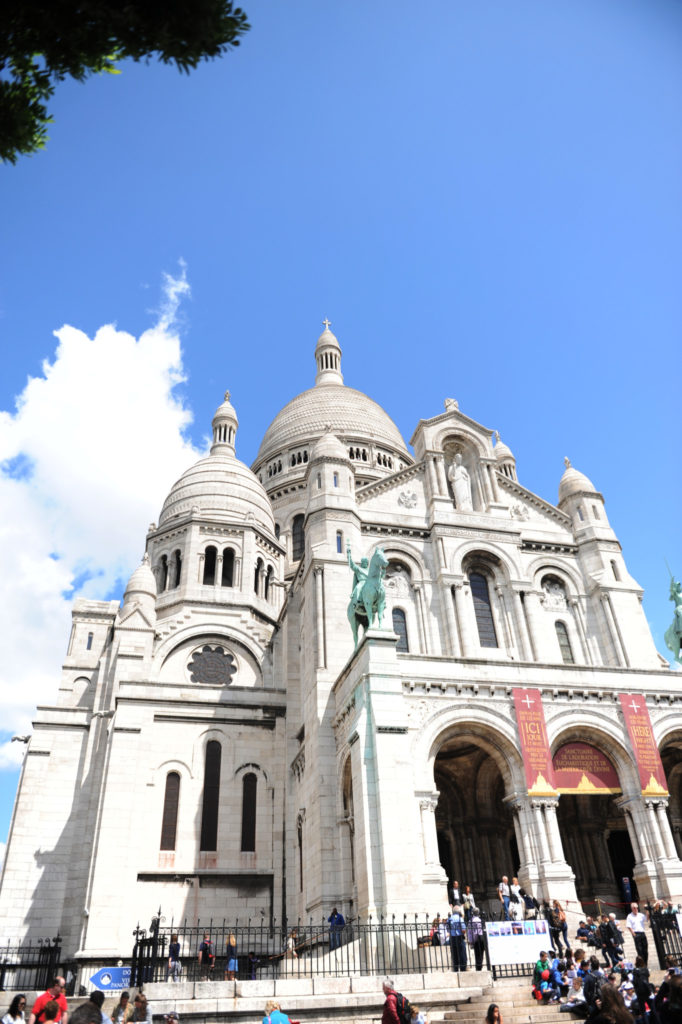 Inside the building, the ceiling is decorated with the largest mosaic in France, a Mosaic of Christ in Glory by Olivier Merson, H. M. Magne and R. Martin.  It represents the risen Christ, clothed in white and with arms extended, revealing a golden heart and is one of the largest mosaics in the world.

We spent a short amount of time actually in the Cathedral, and did not climb the 234 spiraling steps to the top of the dome, but we enjoyed sitting on the steps and looking at the beautiful view for quite some time.  Many Parisians picnic on the grass and enjoy afternoons spent lingering on the steps watching the world go by, so it is a fun place to stop for awhile.  After you walk around the cathedral, be sure to walk down the street and enjoy the lively art market and little shops at the top of the hill. 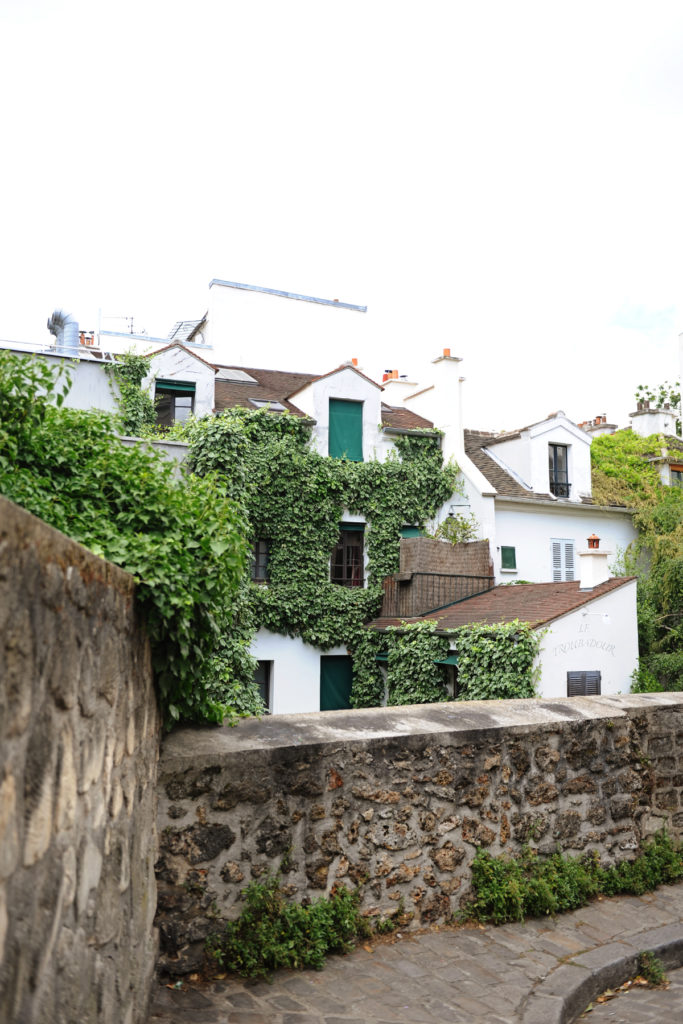 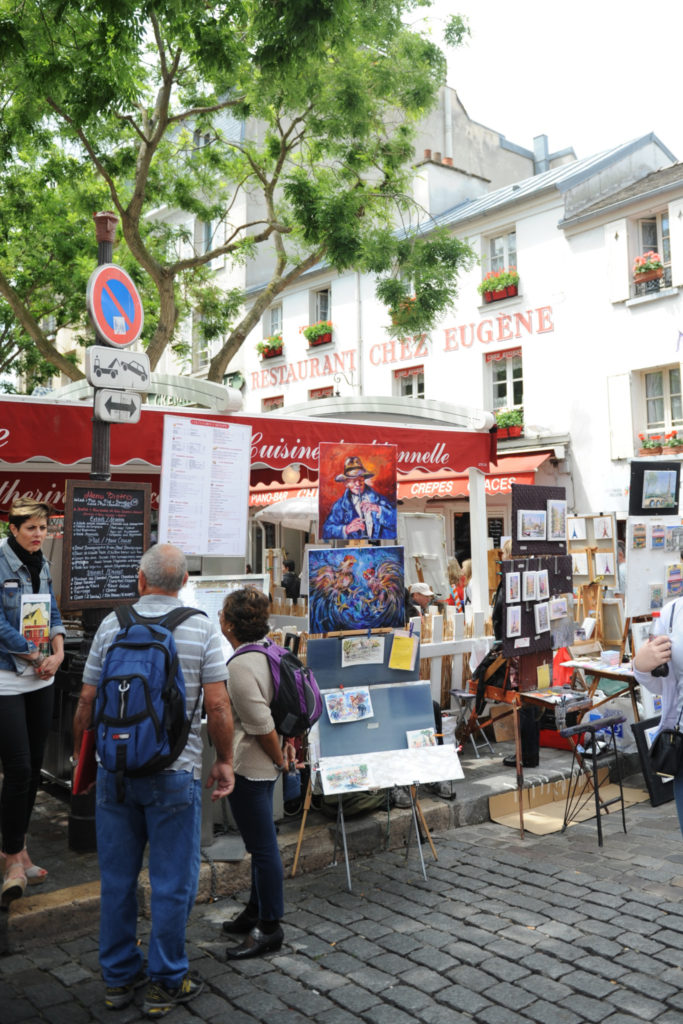 The kids were super excited to find this drinking fountain to fill up their water bottles.  Such a cool work of art.  I wish that more everyday items at home were as beautiful as this water fountain!

At the base of the hill, before you climb up to the Sacre Coeur, there is a darling old Parisian double decker carousel.  We bribed the kids with rides if they were happy to walk through yet another “giant church” as Ashley would call them.   Of course I would have let them ride it anyways because I wanted the pictures. 😉 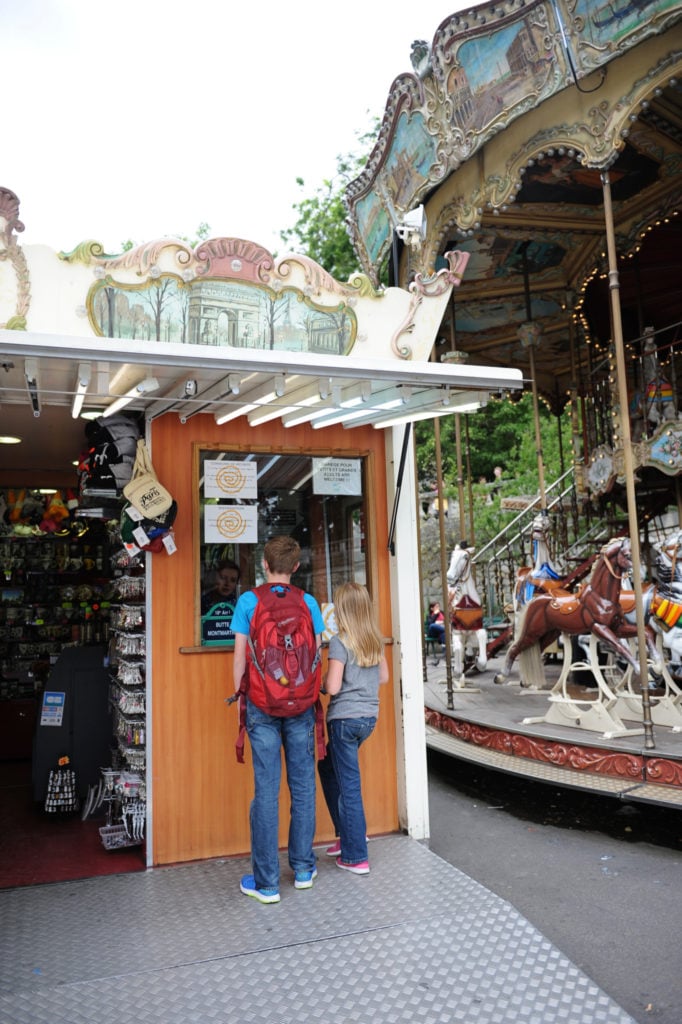 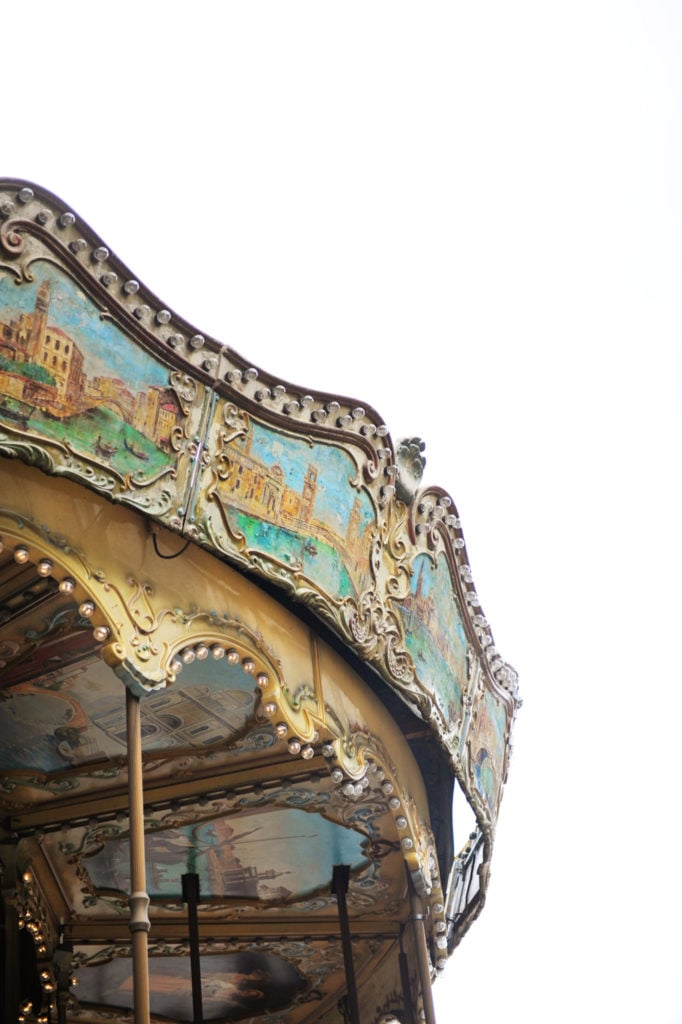 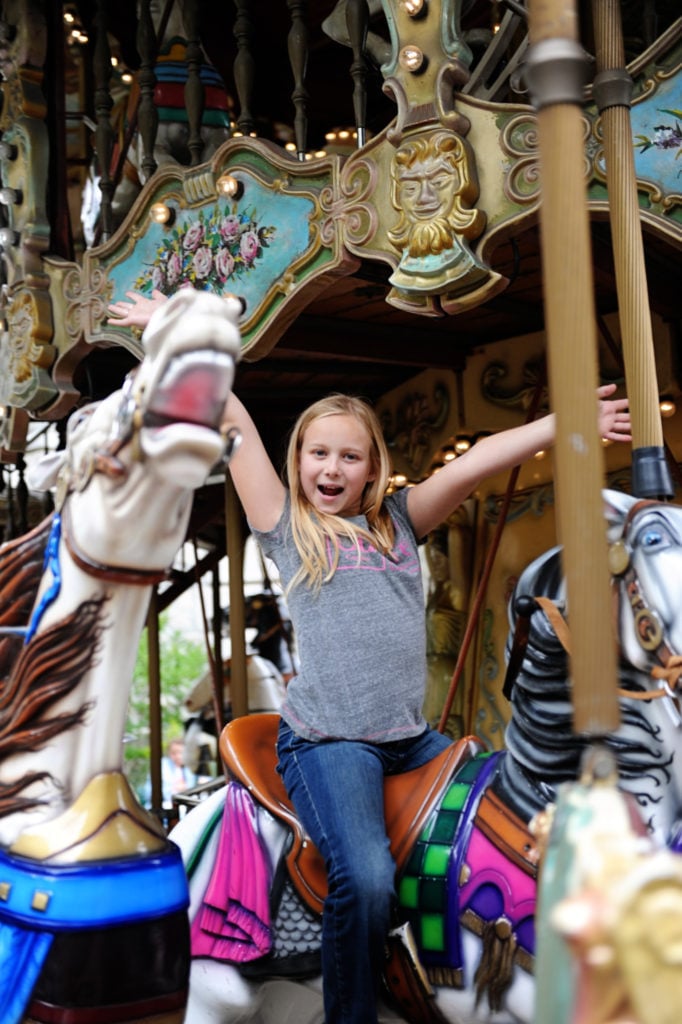 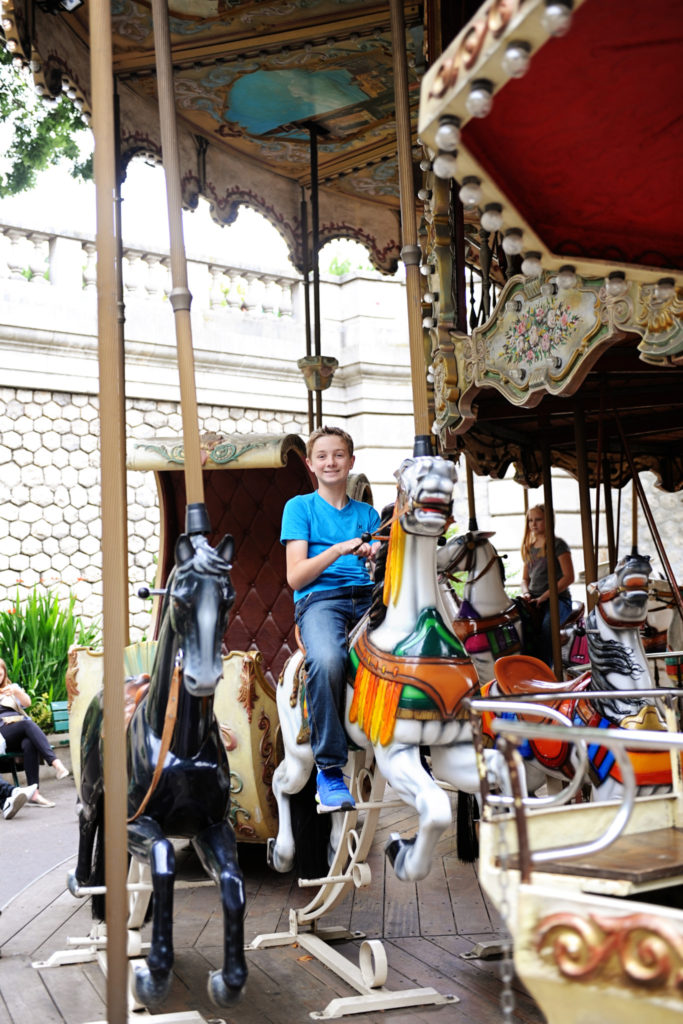 I mean, does it get any more perfectly Parisian than this? 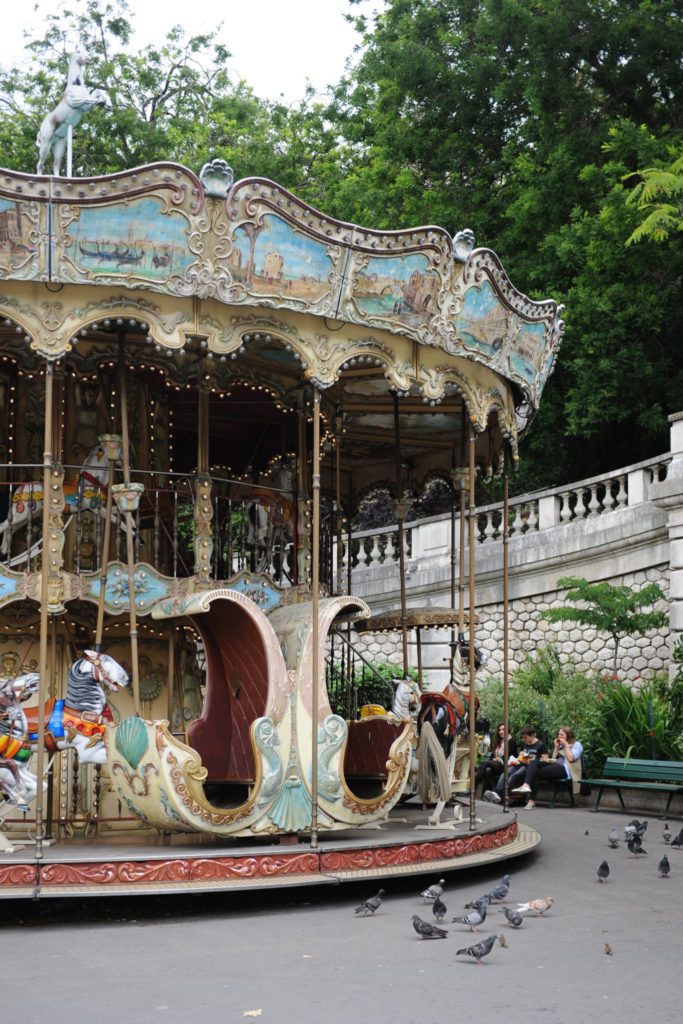 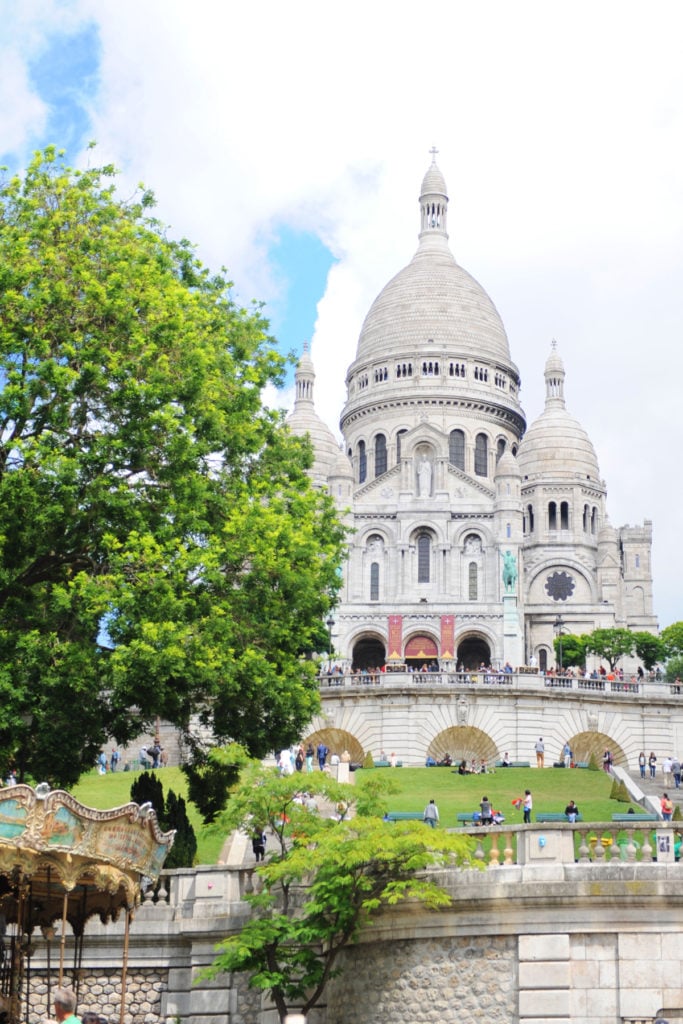 You can find all the important information (hours, cost of admission etc.) on the Official Sacre Coeur website.

Do you have a favorite travel tip?  I’d love to know about it!  Let me know about it in the comments!   You can join me onFacebook, Instagram and Pinterest for more fun ideas about food, design, travel and entertaining.  Don’t forget to sign up for our newsletter (at the bottom of the post) so you don’t miss a thing!

Tammy Mitchell is the founder and creative director of lifestyle blog pinkpeppermintdesign.com. Along with being a homeschooling mom of two kiddos, she is also an in-demand prop and event stylist, photographer, interior and graphic designer. Here on Pink Peppermint Design, she aims to share creative DIY projects, easy entertaining and gift ideas, inspiring interiors and events, as well as her life, with thousands of readers every month. She lives in Southern California, with her husband and two children.
Power Bio Box by HOI
You are here: Home Travel Visit the Sacre Coeur
Title:
Visit the Sacre Coeur
Authors:
Categories:
Mentions:
paris, places to visit in paris, sacre coeur, things to do in paris, things to see in paris, tourist sites in paris, visit the sacre coeur
Keywords:
sacre coeur
Last Updated:
November 15, 2018 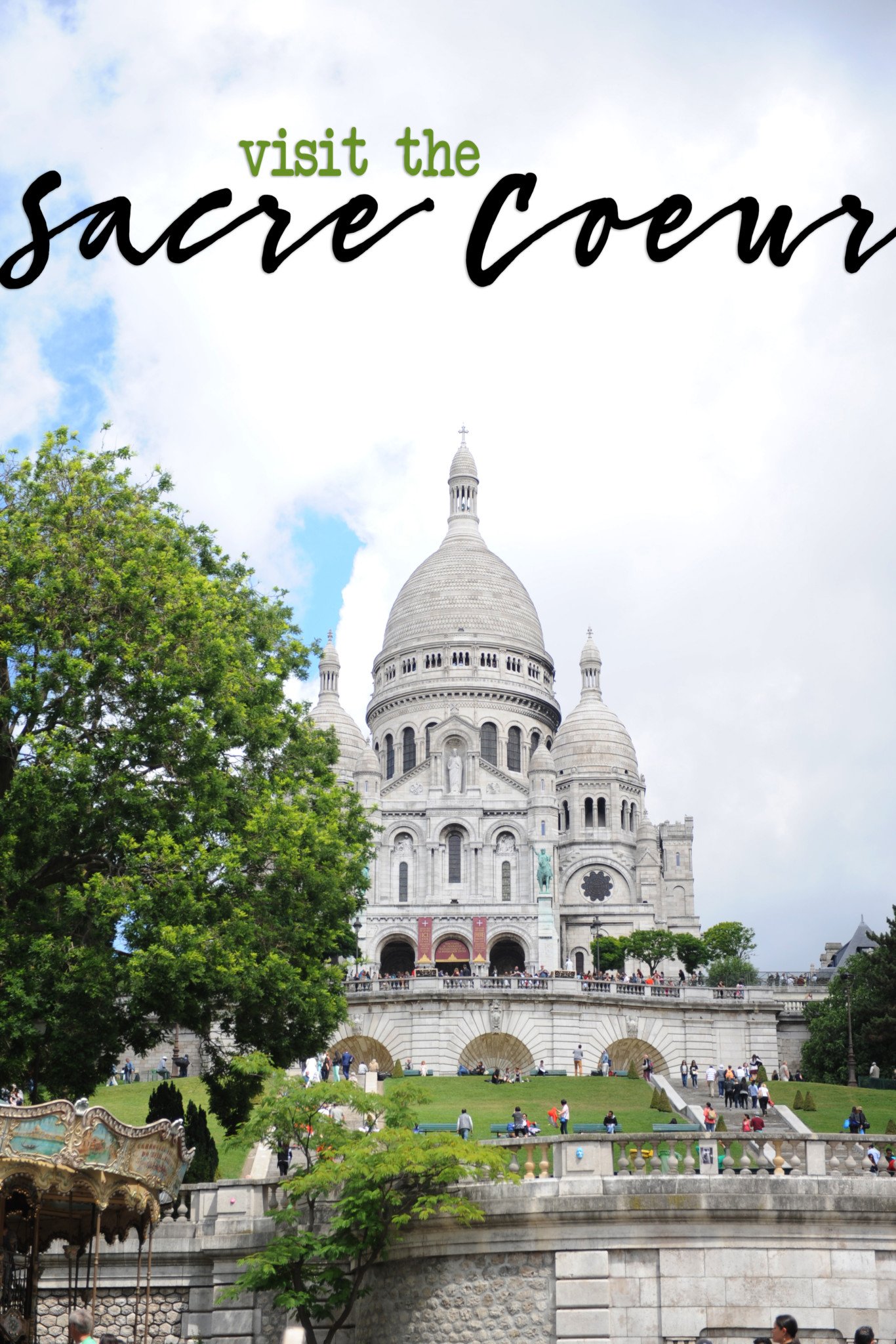