You guys!  I have been the worst these last few weeks at updating our 1987 Fixer Upper progress.  This last month has been SO tough.  I mean SOOO hard.  I’m sure we are wimps and everything, but moving stinks.  Especially when you don’t want to move.  The kids have been such troopers but it has been a really LONG hard month.  They went from a neighborhood FULL of friends and a church congregation full of friends to a neighborhood and church congregation full of an older demographic.  They are all so kind and nice and have welcomed us with open arms which I appreciate so much, but it is super duper hard for kids to not have any friends, with no hope of really having any in the neighborhood.  The amount of stress I feel as a mom who is home with teary eyed kids all day is immense.  Add to that the fact that we are basically camping in the unfinished basement and it has just been kind of an all out disaster.  This last couple of weeks we have been nomads, forced to move from one temporary living situation to another, because the things taking place at the house have been too messy for us to even live there.  Craziness I tell you! 🙂  Note to self, don’t try to move across the county to live in the midst of a major renovation again. 😉 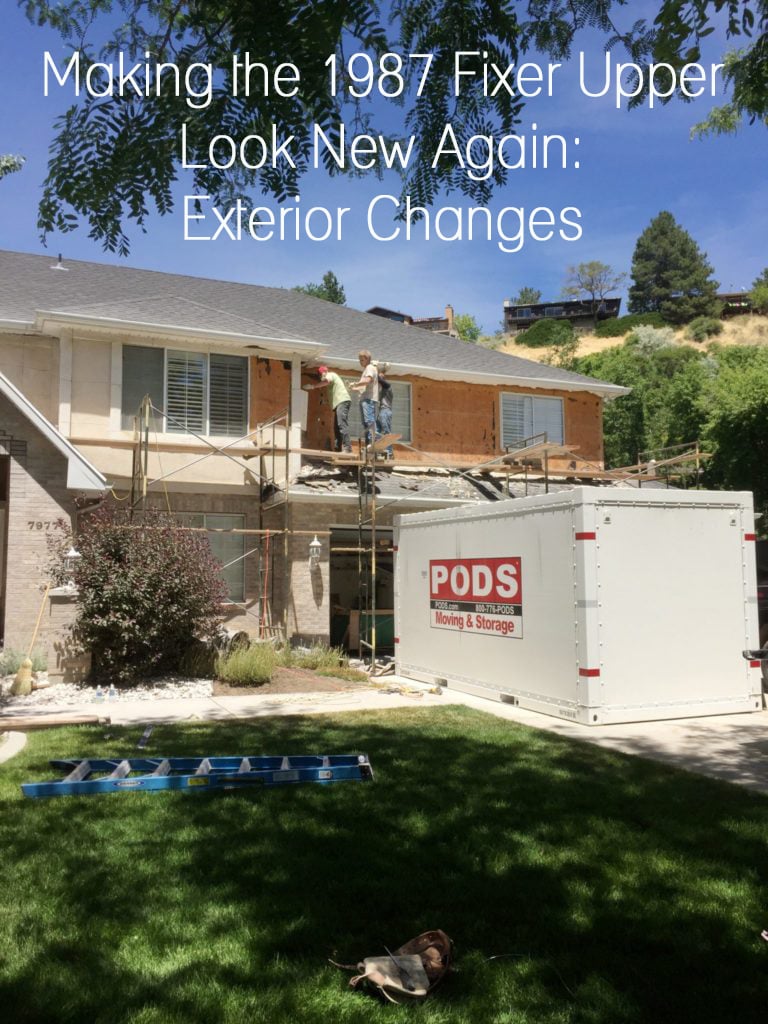 The good news in all of this is that some major changes have started to happen on the outside of the house, which, very quickly is going to start to make it look like a real house again.  That should have some major psychological impact in a positive way, which will be great.  Once the house is completed I know that the overall misery of the move will be seriously reduced, which will be a huge help.

So, what’s been happening?  Let’s take a look! 🙂  The windows had to be replaced on this house.  They were 30 year old aluminum frames that were leaky and not energy efficient at all.  In order to install the new windows properly, the stucco on the exterior all needed to be removed.  At the start of all of this, I wanted to completely make over the exterior, but then decided against it because I wasn’t sure if it was in the budget.  Well, once I realized the stucco had to go due to the windows going in, it kind of put the exterior changes back into play. 🙂

It started looking pretty rough once the stucco came off. eek!  Of course when you start tearing off one thing, it inevitably leads to more fun surprises, so off came the soffet and gutters too.  😉 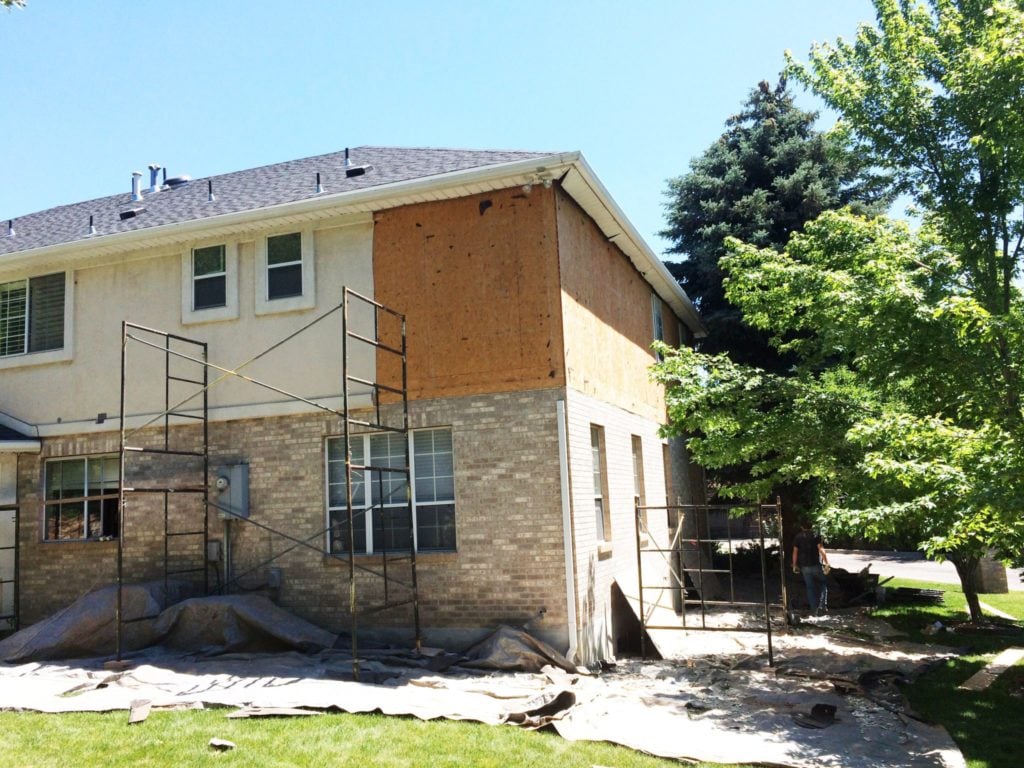 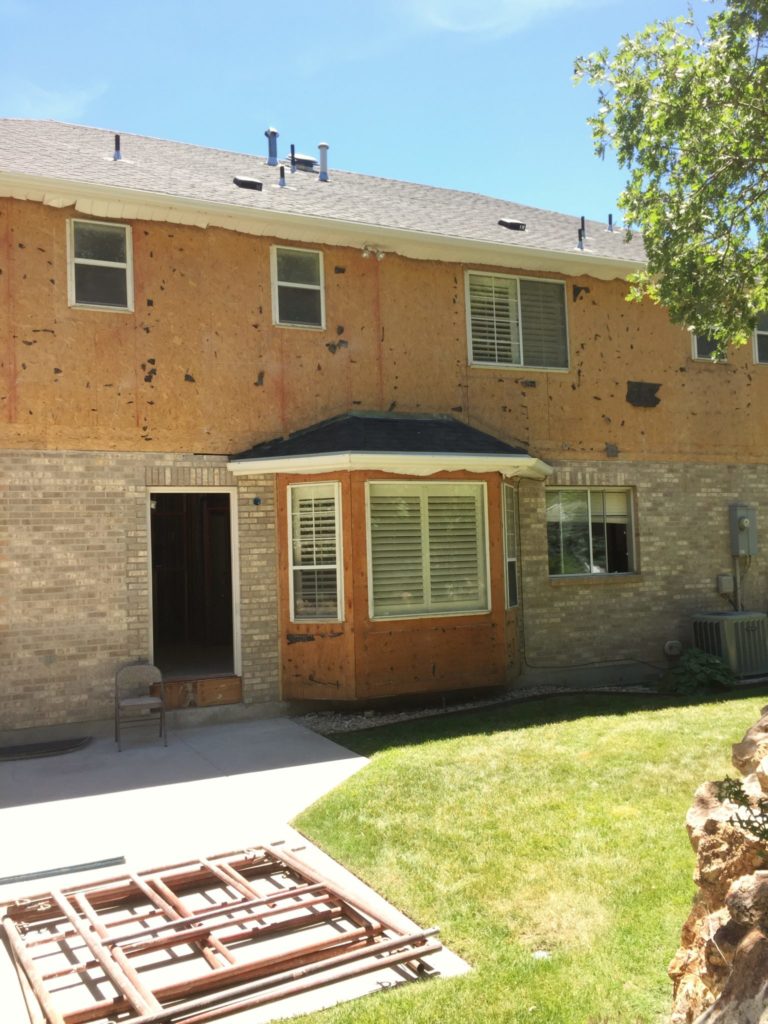 The arched window over the front door and the arch in the brick porch cover were just dating things so much.  When we first put an offer in on the house, I sketched out this image: 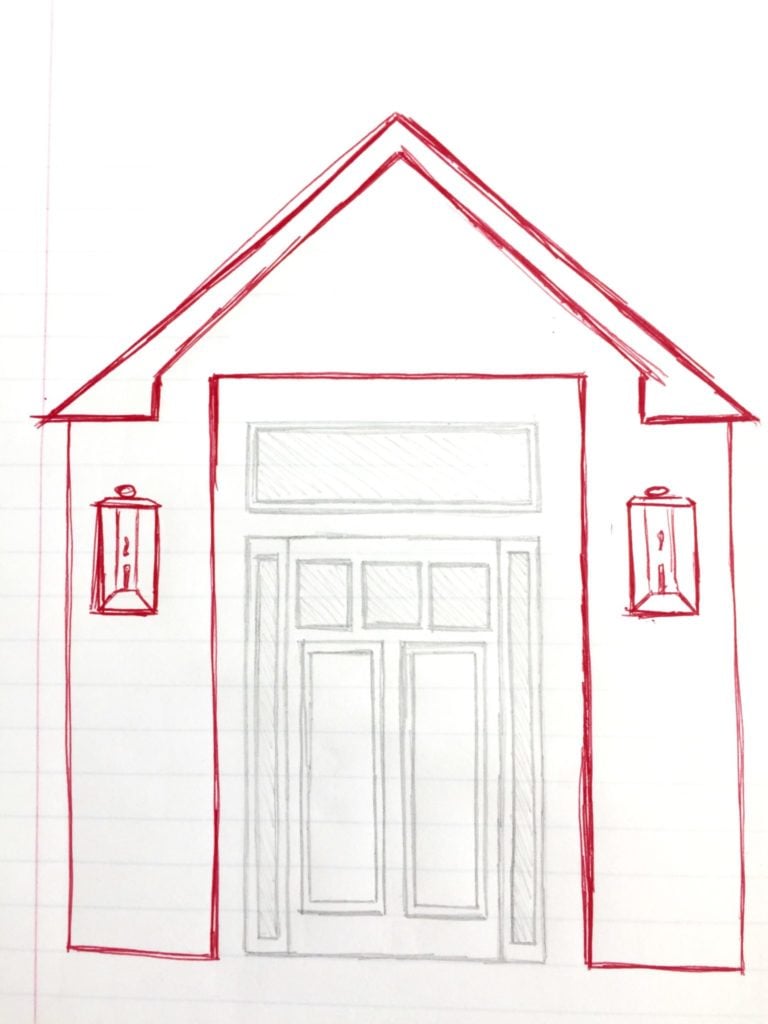 Since everything is such a mess right now, we decided to just go for it and make the sketch a reality. 😉 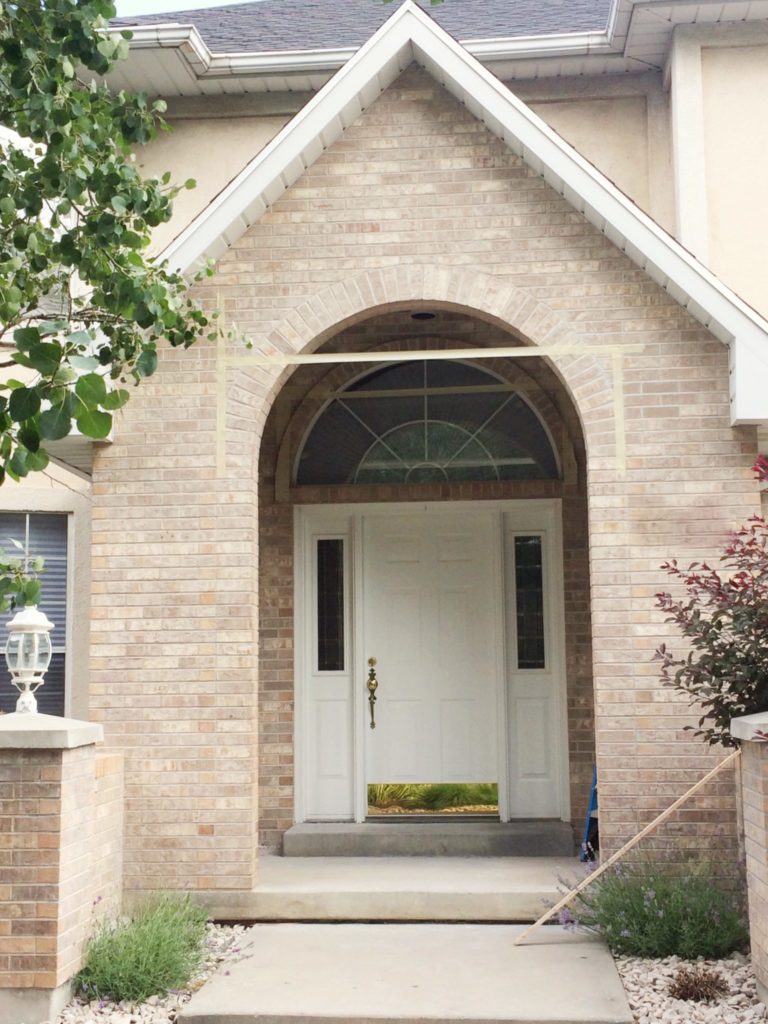 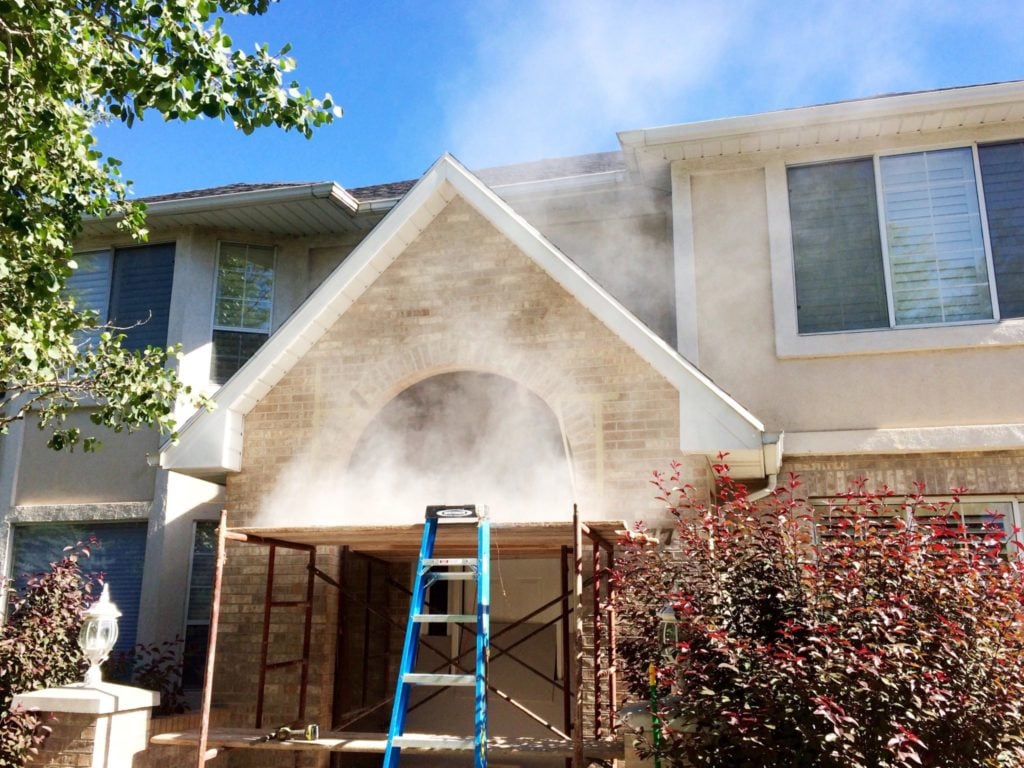 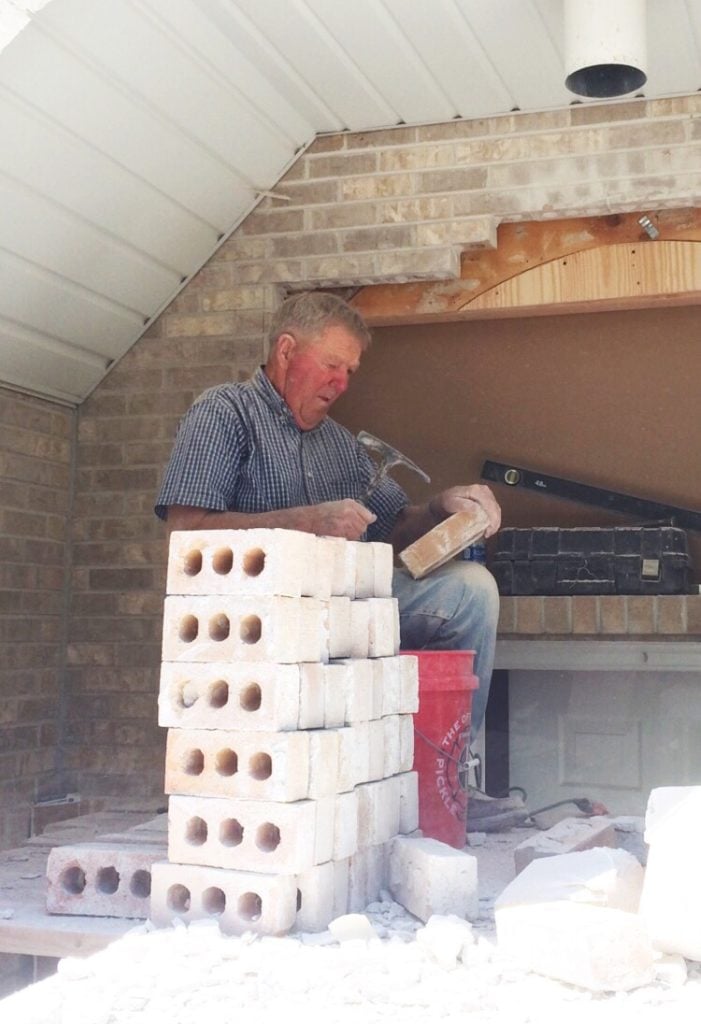 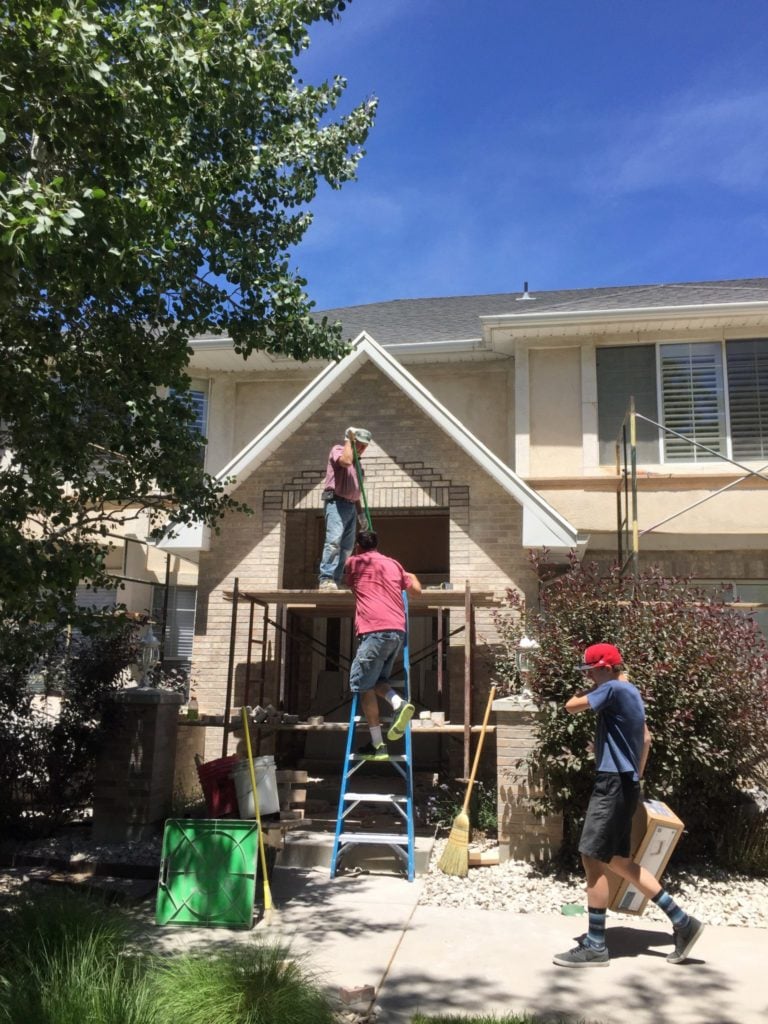 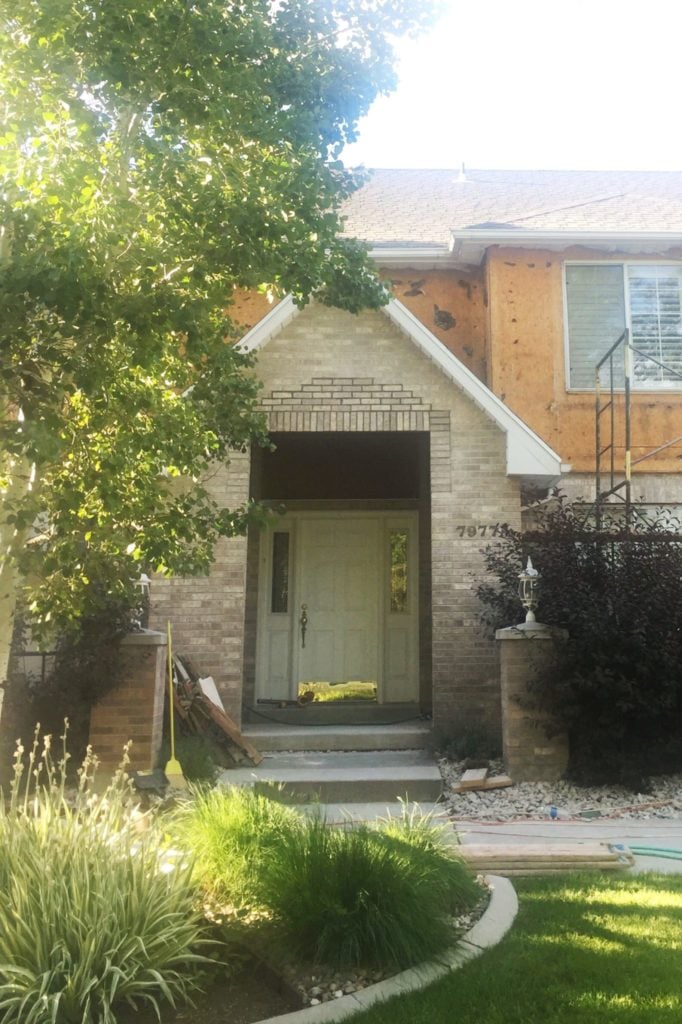 Can you believe how different it looks?  Overall it was a quite easy change but made such an impact! 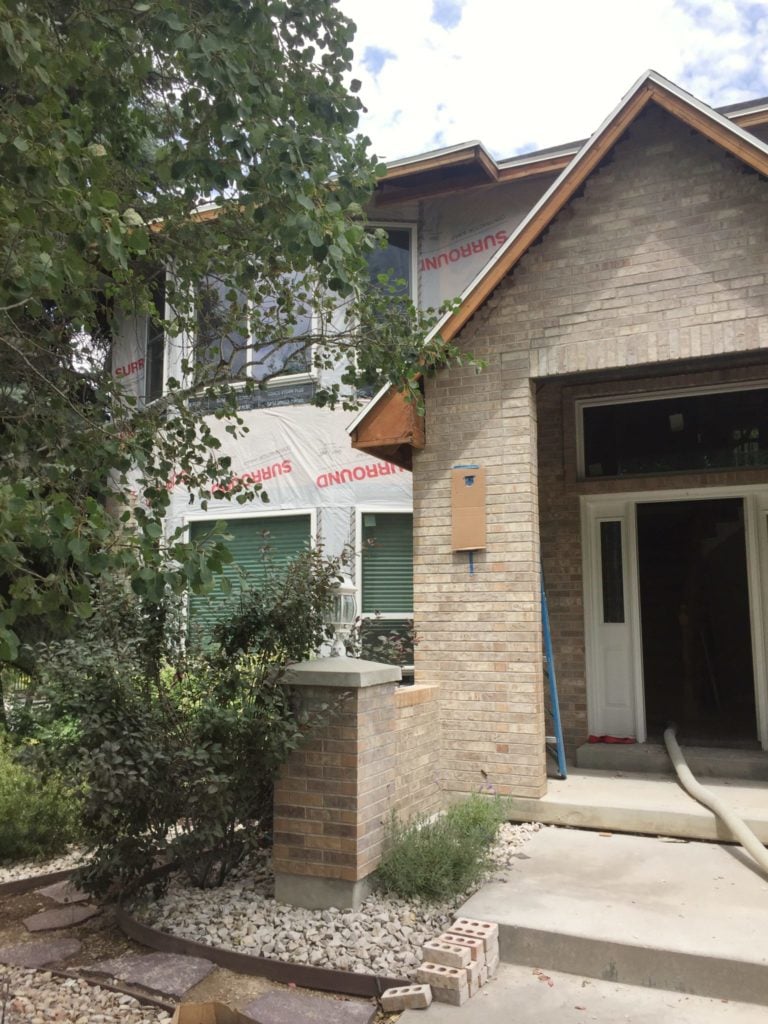 This week the brick got a makeover too.  Time to say out with the peachy-orange and in with a fun gray wash.  We mixed the paint for the wash several times to get it just right.  Dark enough so that you can see the color up against all of the white siding that is going up, but also thin enough that you can still see the character of the brick underneath.  We picked up several samples and painted the spare bricks to get the look I was hoping for. 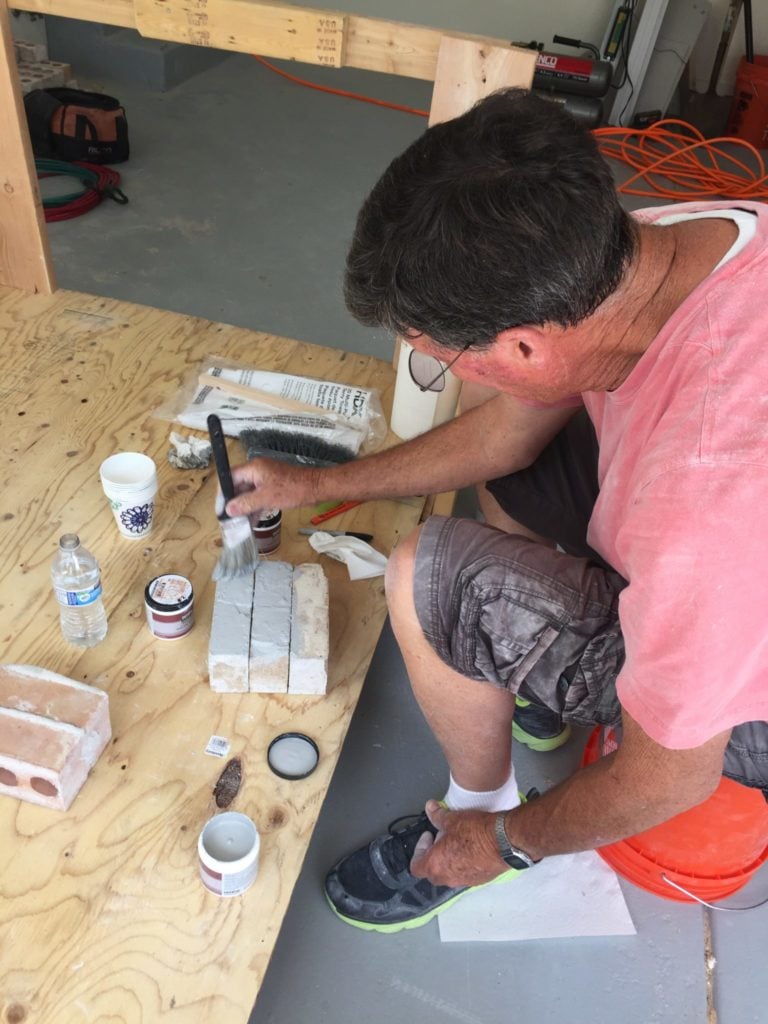 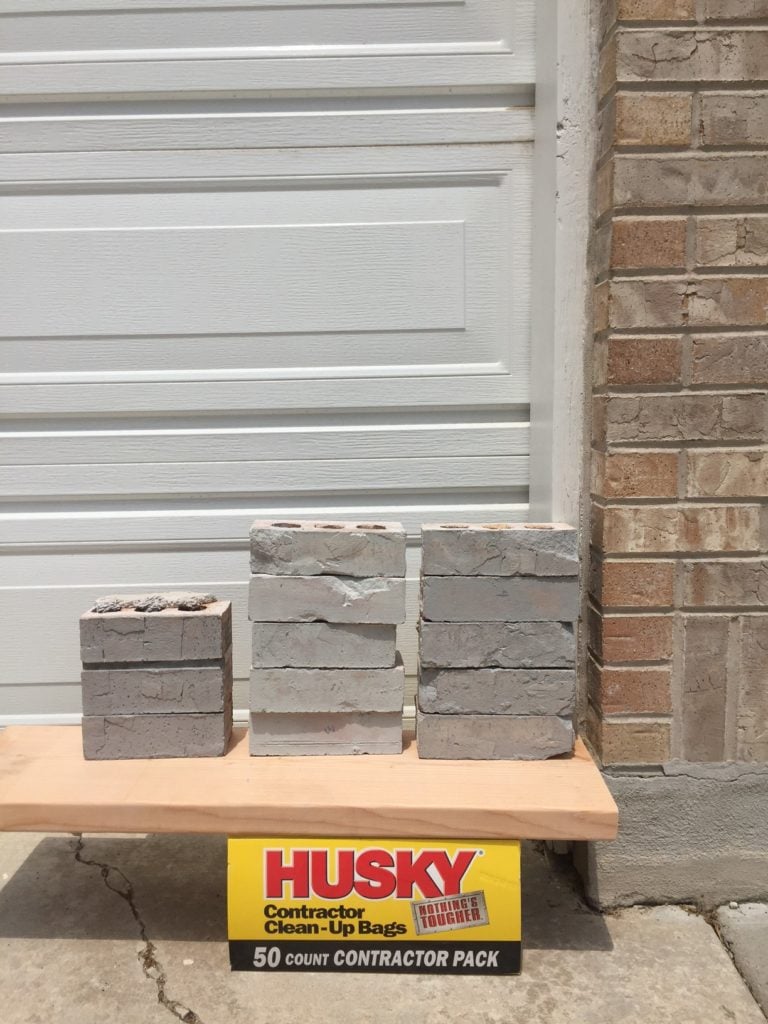 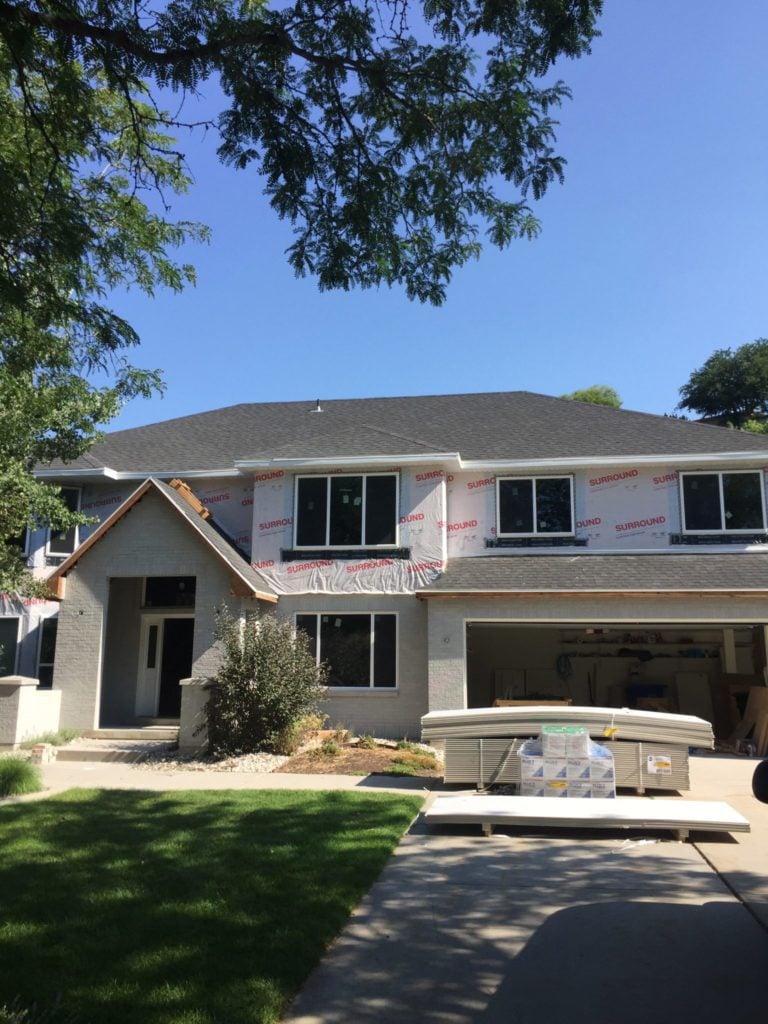 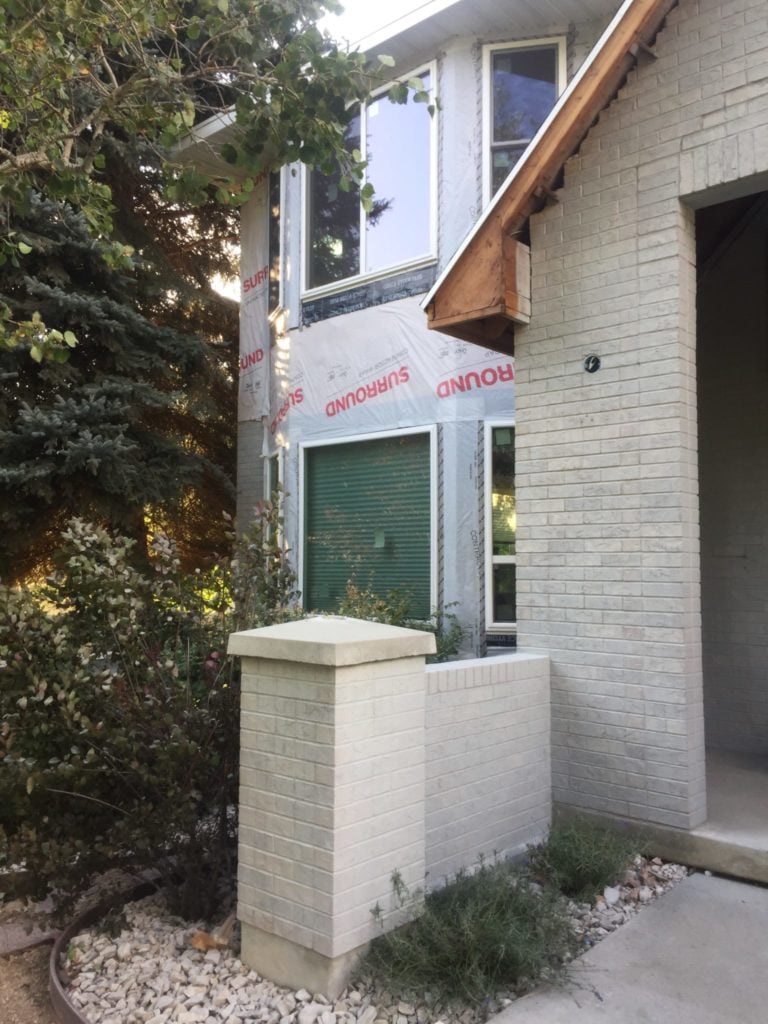 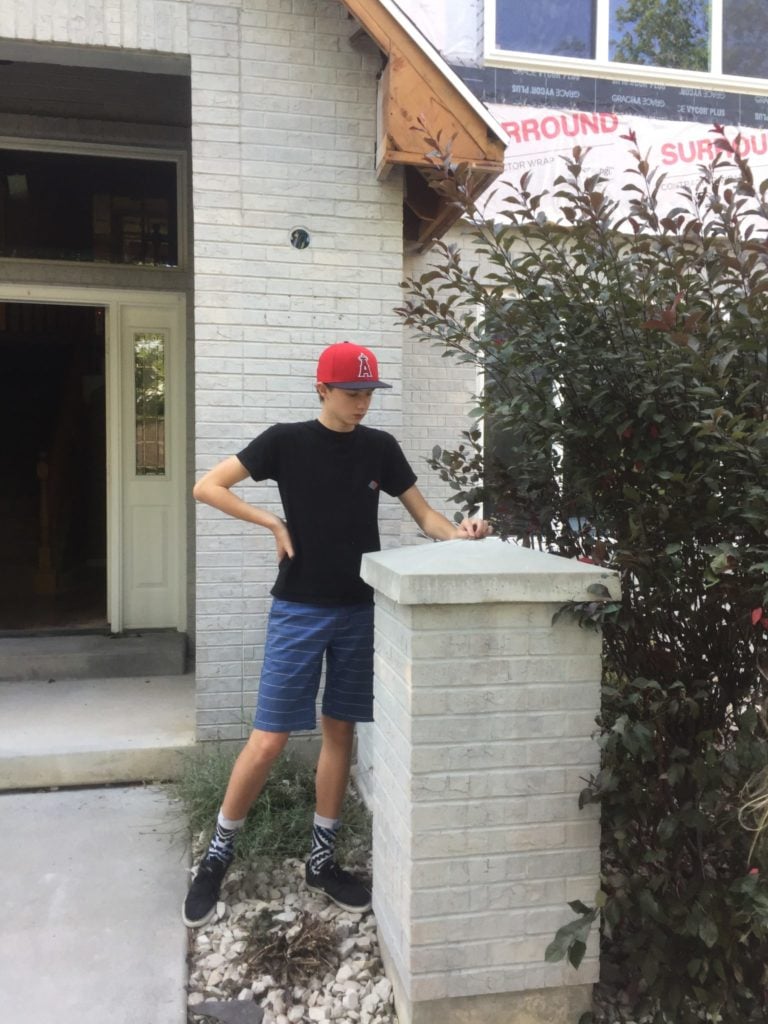 I love a little before and after, so here’s a fun shot… 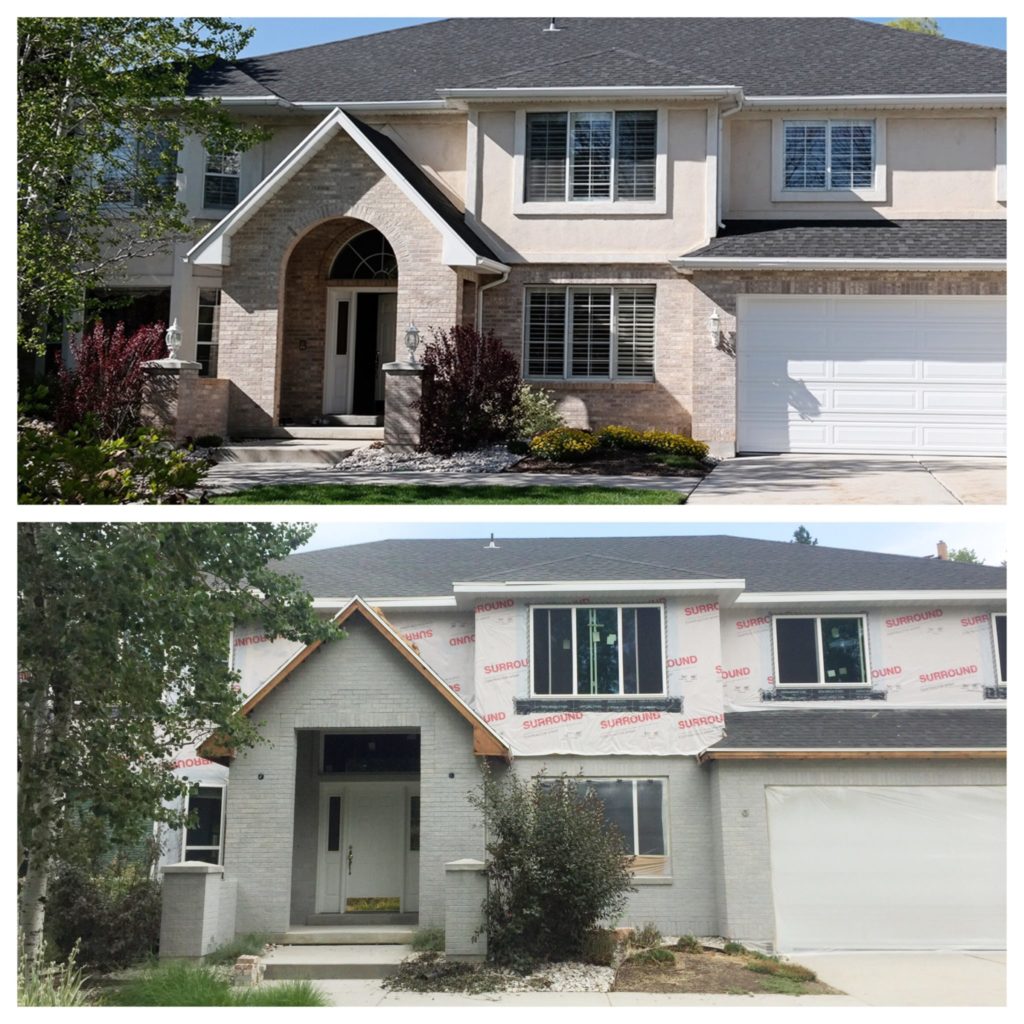 A pretty big change, huh? 😉  I am excited to see the siding go up, the black shutters, gutters, front door, lanterns…the whole nine yards.  Once phase 2 (the landscaping) happens, this place will be looking brand new!

Stay tuned for the next update! 🙂
Tammy 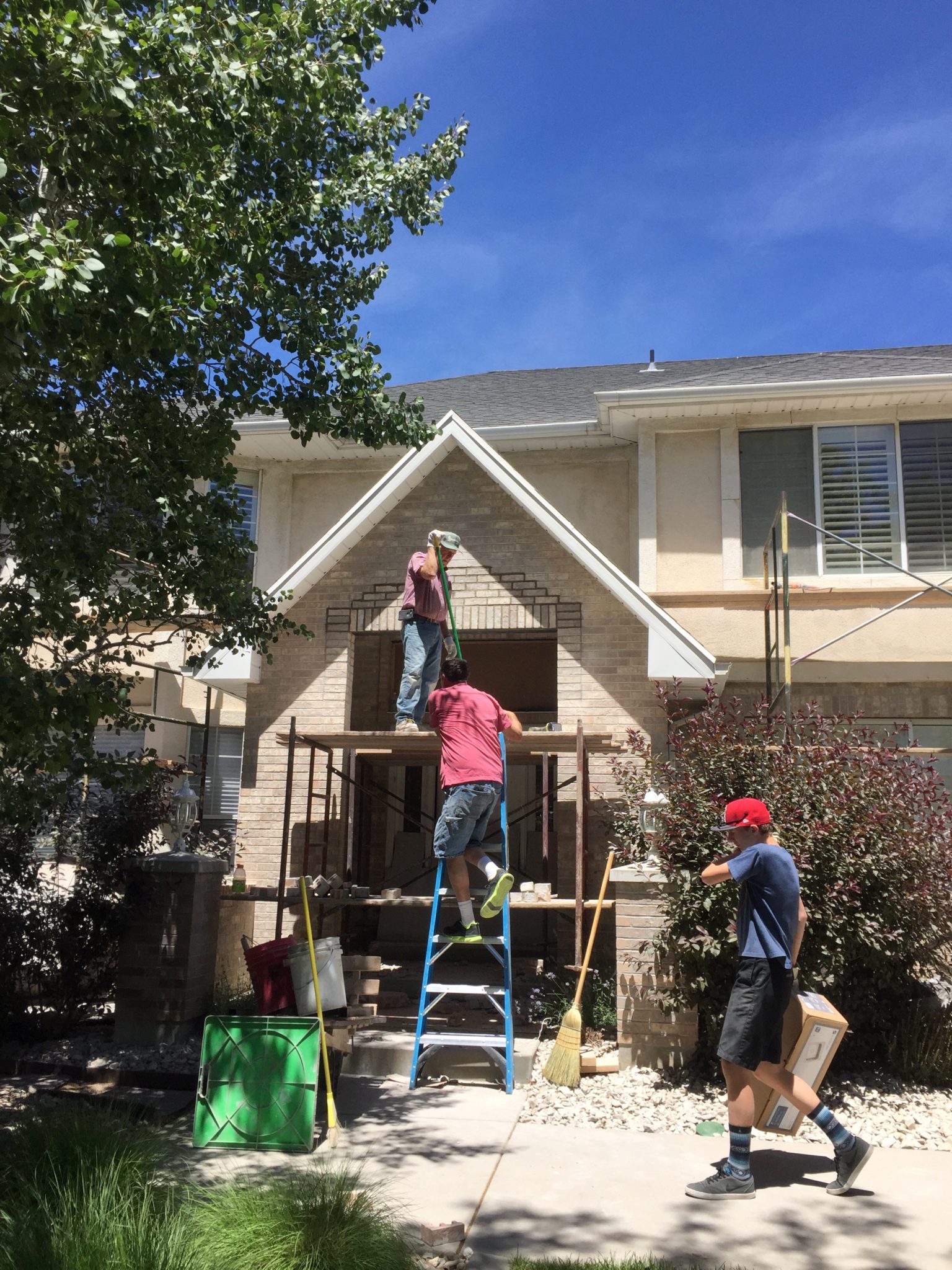