Who knew that windows were going to be such a big deal?  When I first walked through our 1987 Fixer Upper I knew that installing new windows was a must.  It was going to be a big expense, but it was something that just couldn’t be avoided.  The old windows were 30 year old aluminum frames that were not energy efficient, and really dated the house.   It’s funny because when I first considered buying an existing home one of the attractive things about it, as opposed to building, was that a few major things like window coverings and landscaping were already done…and would at least be sufficient for awhile until the budget recovered from buying a new house and we could eventually update them.  While I’m not generally a huge fan of shutters (they look pretty but block out too much light for me, personally) this house had shutters on a lot of the windows so that was something I thought would be a money saver for awhile.  That was, until I got a closer look at the windows.  When the windows came out…the shutters had to go too.  So much for getting existing window coverings! 😉  One thing I wasn’t too sad about was losing the weird window sills that were apparently a “thing” in UT in the 80’s.  The bottom sill of the window was a formica shelf of sorts that hung out beyond the wall. 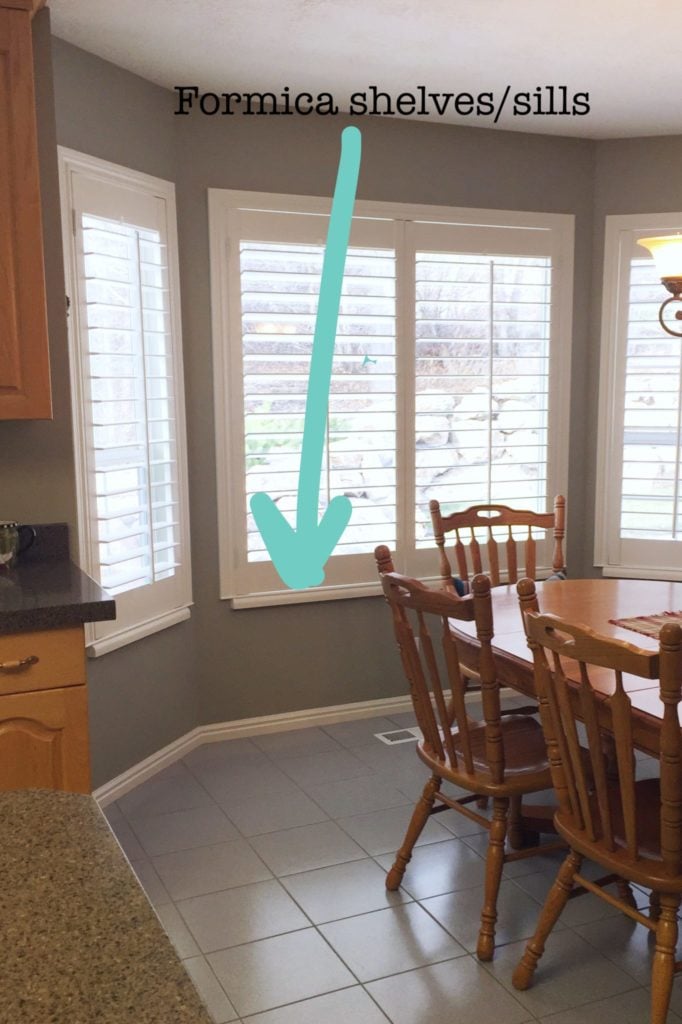 It prevented the shutters from having a normal casing on all 4 sides which was kind of a weird look.  Adios old windows and weird sills!

I wrestled with the idea of black v. white windows for some time.  Black is so trendy right now and I love the look of it, I just felt like if I ever wanted to change the exterior color of the house, black might not work as well with another color down the road.  When it came down to it, I chickened out and went with white frames.  I looked at SO many inspiration images on Pinterest and just couldn’t decide!  This may turn out to be one of the few decisions I regret in this whole process.  In the end I went with the safe choice and sometimes I get frustrated with myself for always leaning toward the more practical/safe side of things. 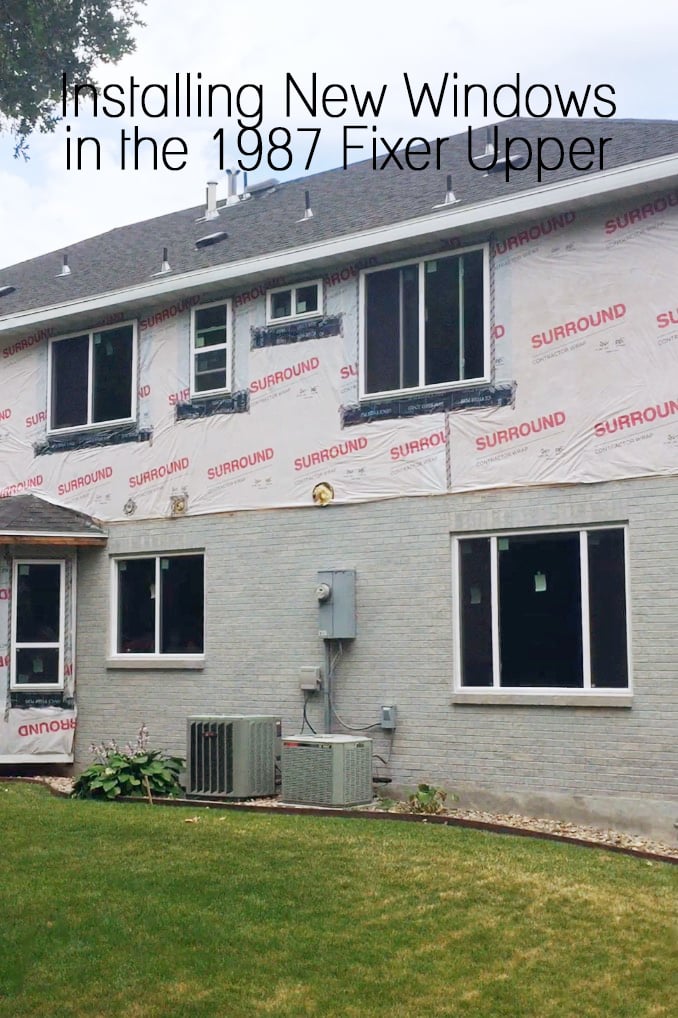 When we started demo, I had no idea what an important step installing new windows is in the overall construction process.  I am learning SO much through this remodel!  Demo is pretty easy and goes quickly, rough electrical and plumbing are next, followed by windows.  Until new windows are installed, the entire process is halted.  The reason for this is that in order to properly install windows, you have to tear out the drywall around them on the inside and rip off the stucco or whatever material is on the exterior of the house as well.  It makes a MESS and basically requires a complete re-do of the interior and exterior of the house. Ugh!  Until those new windows go in, nothing can start to be put back together.  Needless to say, the windows going in is a huge turning point in this process!

A major reason for the renovation was not just to update the decor, but to update the floor plan as well.  This house was a custom build, and the owners did some things at the time that made the floorplan very specific to their needs, raising six kids.  Those additions were things that made the floorplan very choppy and closed off.  I wanted to improve the flow and make the floorplan more modern and open. Once I dove into changing all the windows, it brought on a whole slew of other changes with it.  Essentially, when all is said and done, we have moved or changed almost every single window in the house, as well as added several new windows for better light and to work with the newly improved floor plan.   For example, in the master bedroom we discovered that the two windows on the wall where the bed is designed to go are not wide enough to fit our king sized bed…so each of those windows were moved 5 inches further apart to accommodate the larger bed…little changes like that that make a huge difference in the long run.  You can see on this wall where the existing windows used to be and the plywood that now covers the gap between where the old windows were and where the framing for the new windows is now. 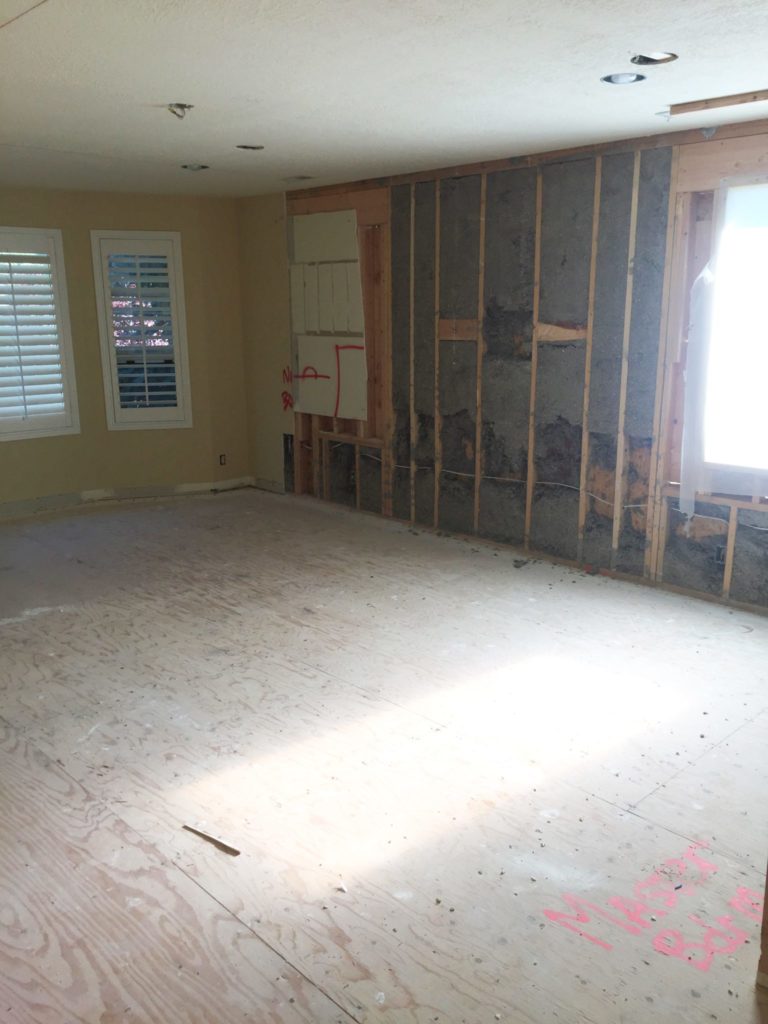 These kinds of little changes happened all throughout the house.  We did the same in each of the secondary bathrooms… 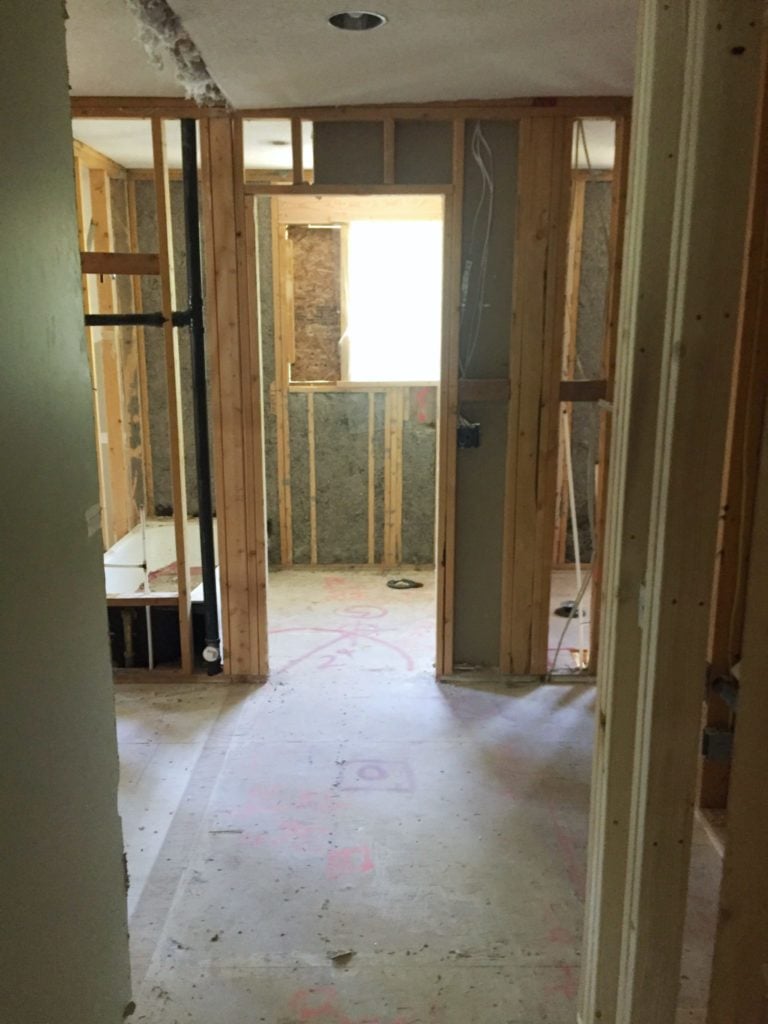 The biggest impact to the the overall design was installing new windows in places where there hadn’t been windows before.  Wow! What a difference it has made to the overall look and feel of the house!  It is SO much lighter and brighter!

All of the windows at the back of the house face north…not the best for light.  When we purchased the house the kitchen was separated from the family room by a wall.  Next to the nook was also a steel door leading to the backyard…both things that really killed the light in the space.  In the family room, there were bookcases on either side of the fireplace as you can see in these pictures… 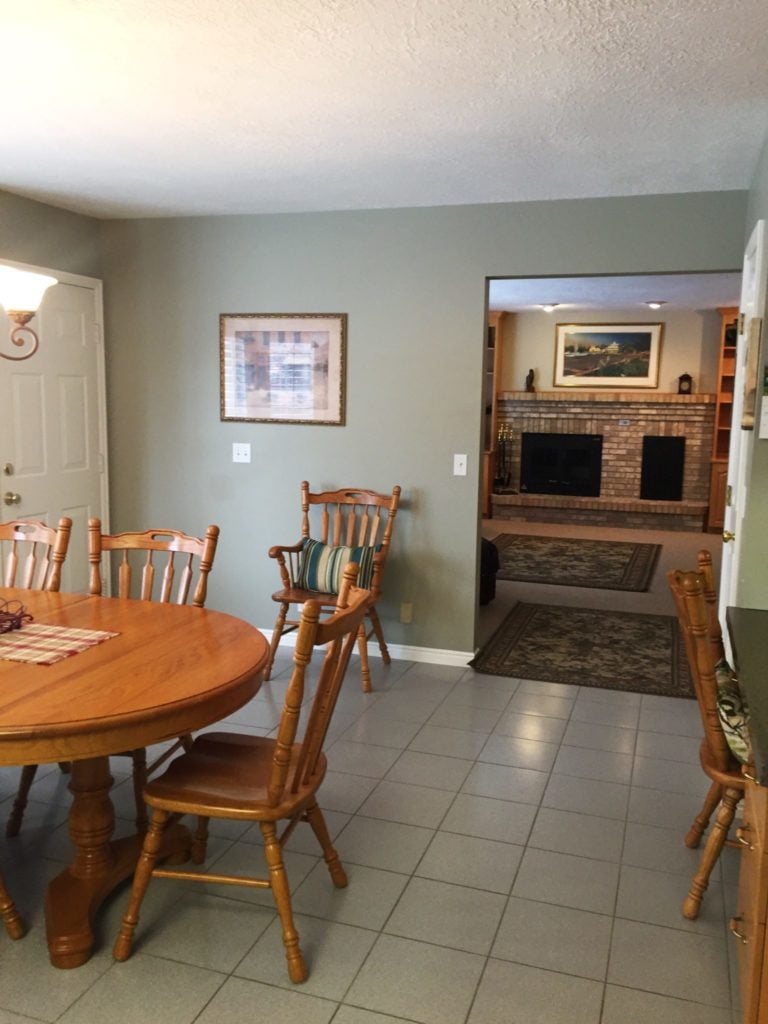 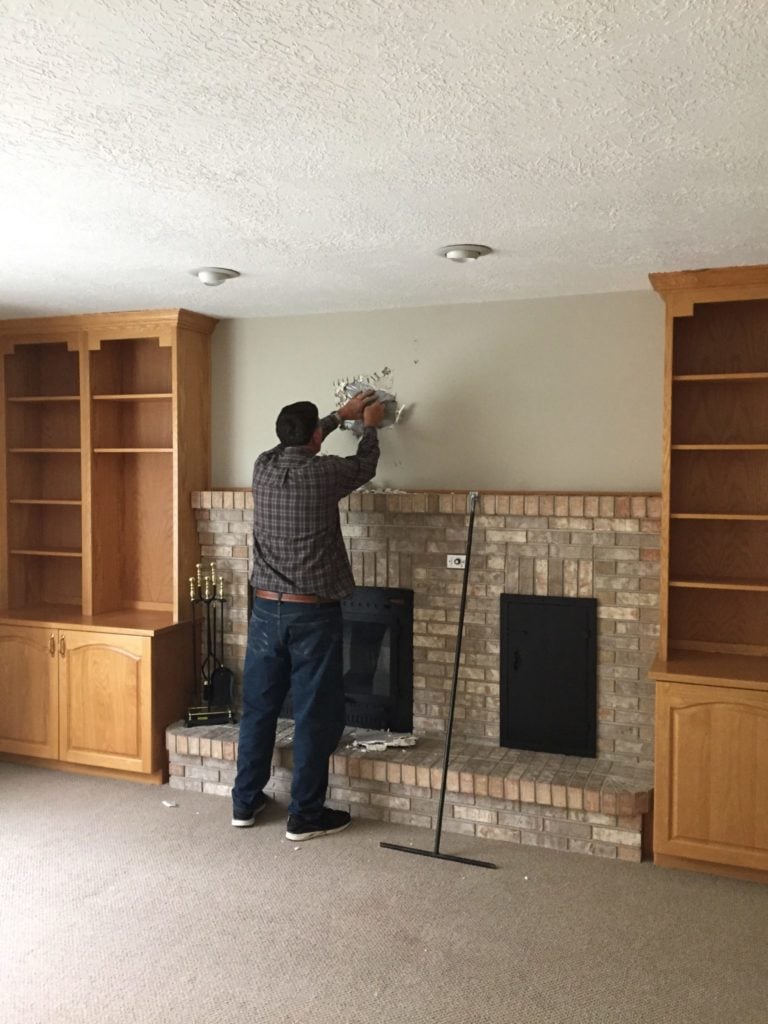 Where the bookcase on the right is, that wall backs up to the garage wall.  But, on the wall to the left side of the fireplace was potential for a new window to let light in from the east…so in went a window! 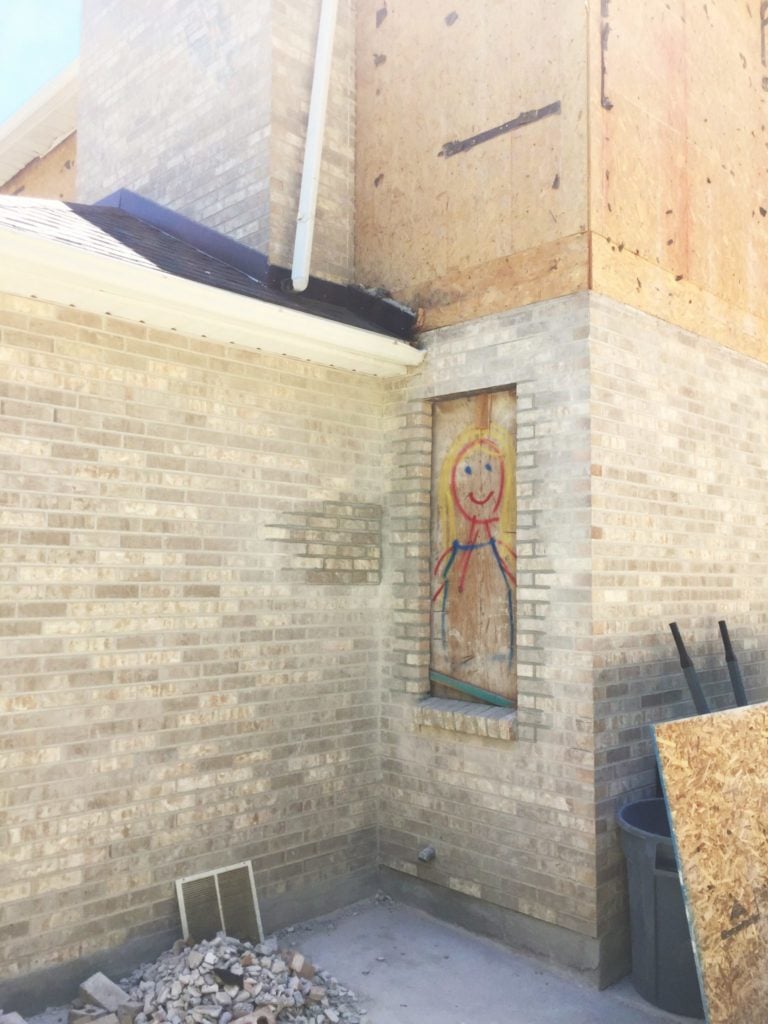 Removing the wall between the kitchen and the family room was a must to open up the area and bring in more light, but we also added a single french door in place of the previous steel door and what a difference!  The room minus the wall and adding in the new windows is a whole new space.  Check it out! 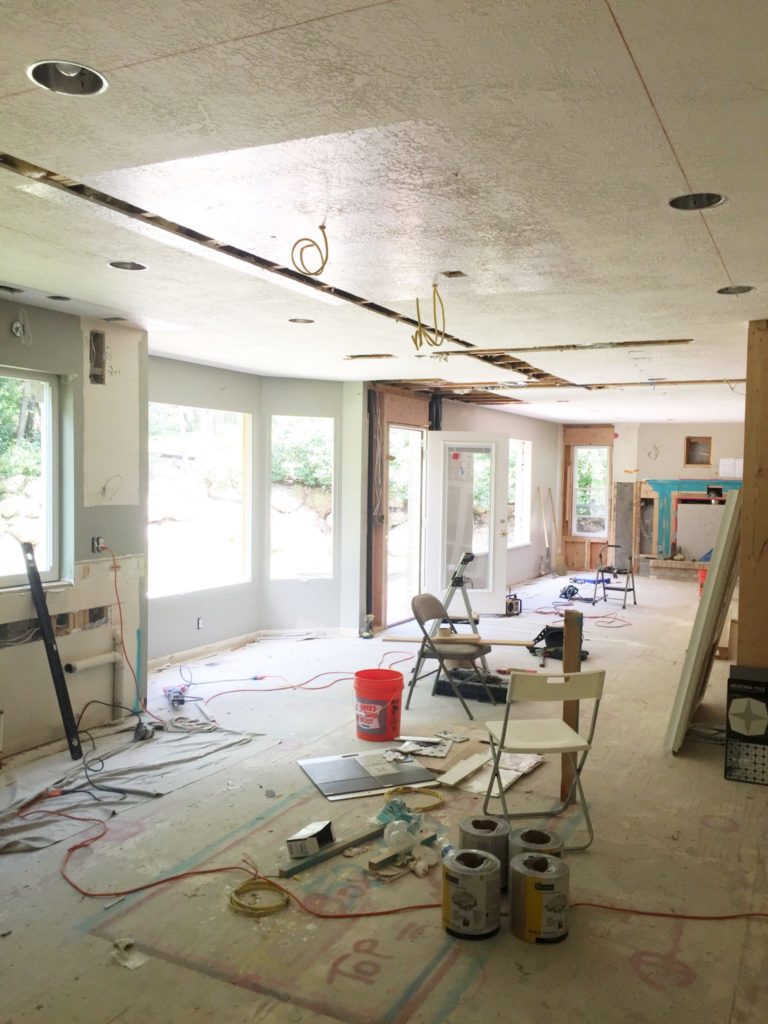 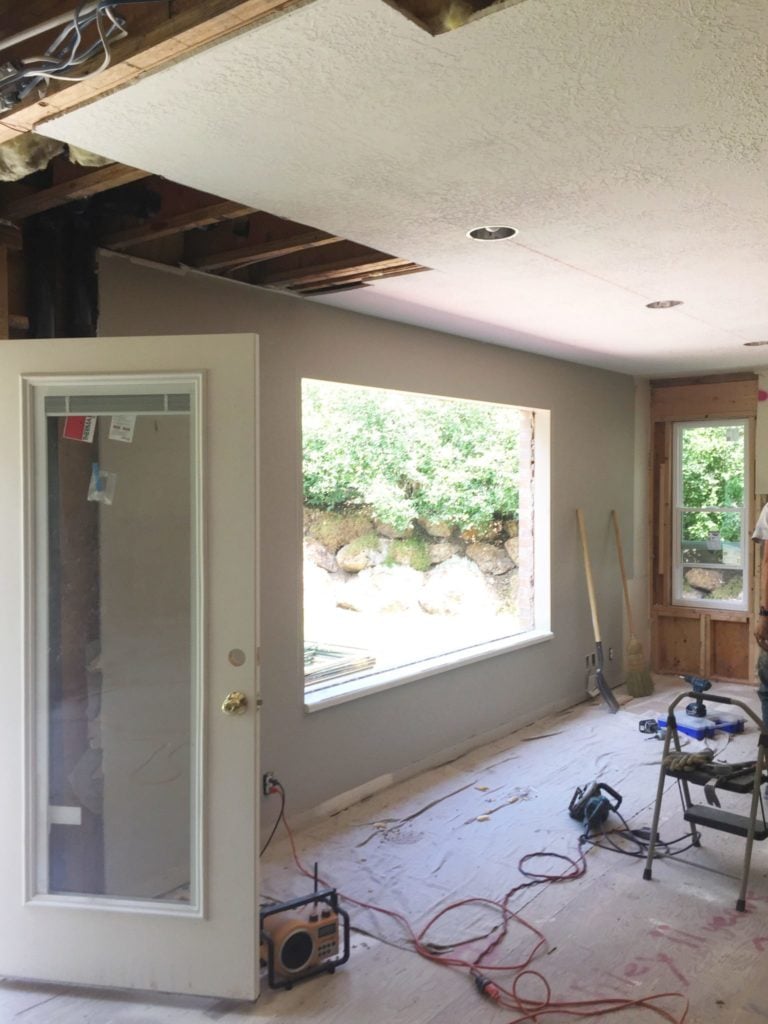 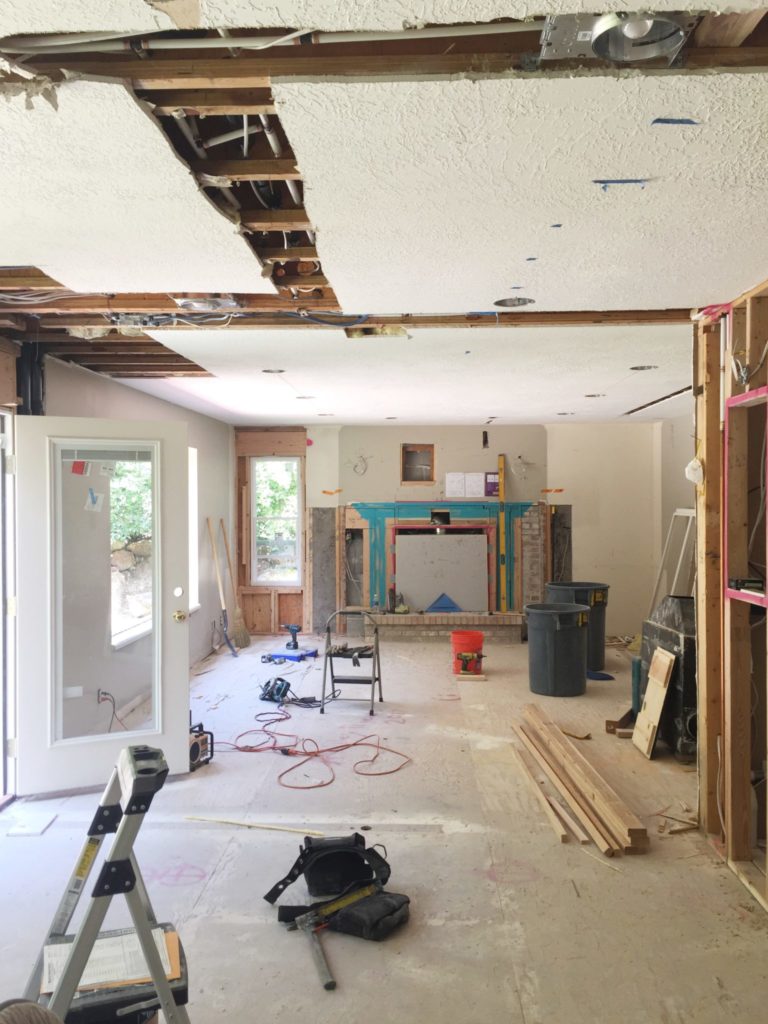 Can you even believe it is the same space?  I am SO excited about this transformation in the main living area of the house.

Upstairs I made some similar changes.  We created a much larger master closet out of two smaller closets and borrowed a little space from the large master bedroom.  It was such a dark spot, I went back and forth over putting a window in the closet…I wanted it, both my contractor and realtor told me that it was not a value add…but I went with my gut and I am SO happy I did!  A total value add in my every day life!  Now there is amazing natural light in there and I can bring fresh air in, which is HUGE!  It might just be my favorite new window in the house. 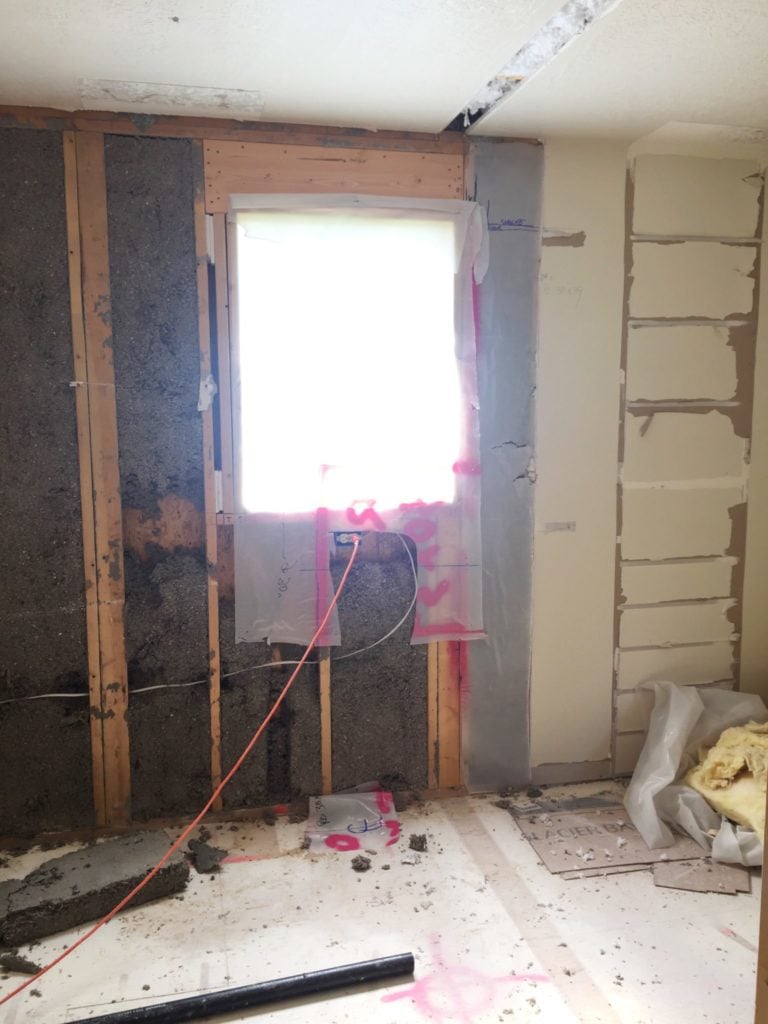 We also added all new windows on the back of the house in the master bathroom.  You can see them best from the outside… 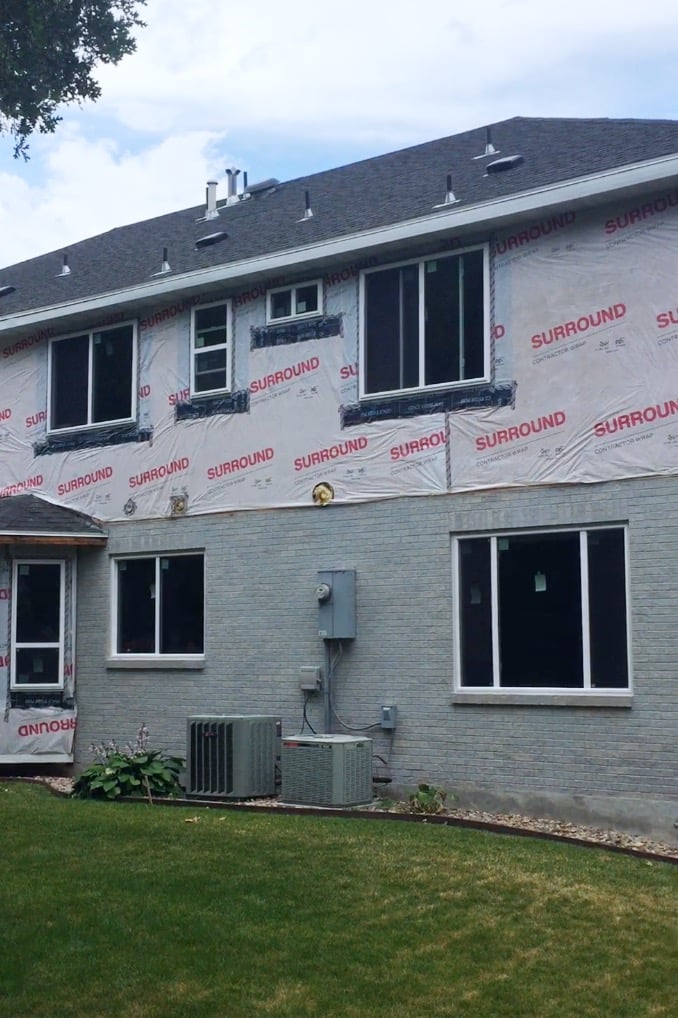 If you can believe it, that entire back second floor corner of the house from where the three new windows are (looking from right to left) used to have no windows.  WHAT?!  And, it continued around the side of the house too…you can see where the new closet window was added around the corner.  Before that there was nothing there.  It was a very blank and boring exterior and a very dark interior.  Now those problems have been solved. 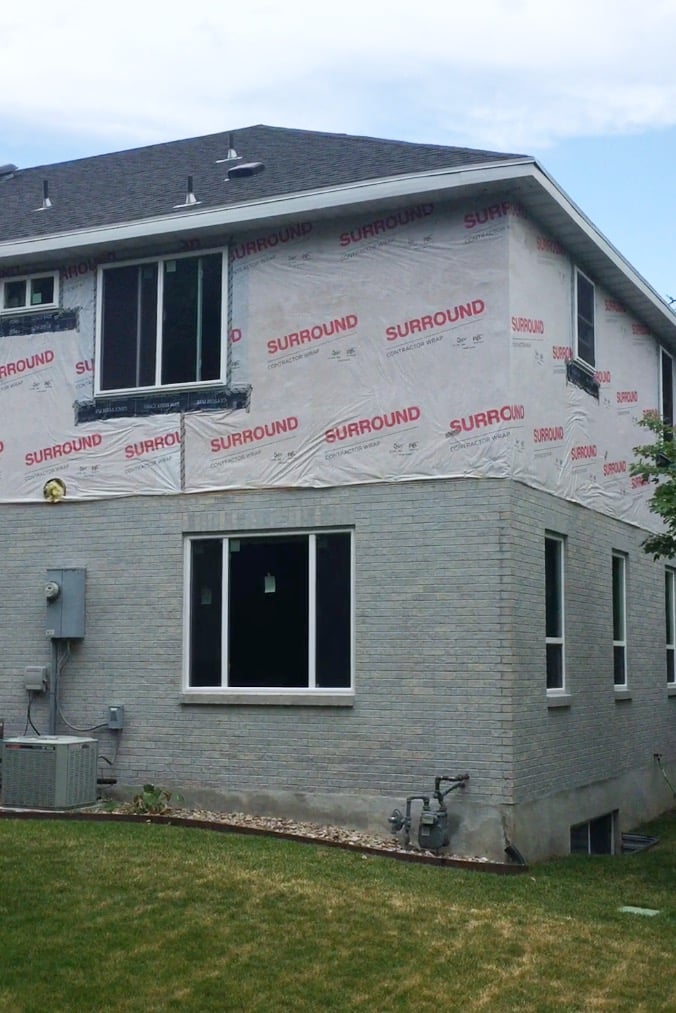 Now that all of the new windows are in I am trying to decide on coverings.  I had these coverings  installed in our CA house shortly before we moved and I love them!  I tend to use the same shades throughout the entire house for consistency sake…what do you usually do?  I also love these shades so I might just be a bit adventurous and mix it up a bit in this house.  Now that the windows are in, the decorating ideas are for sure swirling around in my head like crazy!  I may have been shopping a bit and hiding things in the storage closet until I can use them. 😉  Here are a few of my favorite things if you want to shop too.  Click on any affiliate image to shop or for more info:

Bottom line with installing new windows is that it is messy and expensive…not just the windows themselves, but all of the drywall and exterior repair, painting etc. that needs to be done following the installation.  There are often different types of rebates offered to help offset the cost of making your home more energy efficient, so be sure to look into any programs your state may be offering before you jump into the project.

I can’t wait to share more progress with you!  Things are happening fast now.  It is finally starting to look like a house again, which is super exciting!

I hope you have a great day!
Tammy

Tammy Mitchell is the founder and creative director of lifestyle blog pinkpeppermintdesign.com. Along with being a homeschooling mom of two kiddos, she is also an in-demand prop and event stylist, photographer, interior and graphic designer. Here on Pink Peppermint Design, she aims to share creative DIY projects, easy entertaining and gift ideas, inspiring interiors and events, as well as her life, with thousands of readers every month. She lives in Southern California, with her husband and two children.
Power Bio Box by HOI
You are here: Home Interior Design Our 1987 Fixer Upper Installing New Windows in the 1987 Fixer Upper
Title:
Installing New Windows in the 1987 Fixer Upper
Authors:
Categories:
Mentions:
1987 fixer upper, fixer upper, home remodel home renovation, remodeling
Keywords:
installing new windows
Last Updated:
November 15, 2018 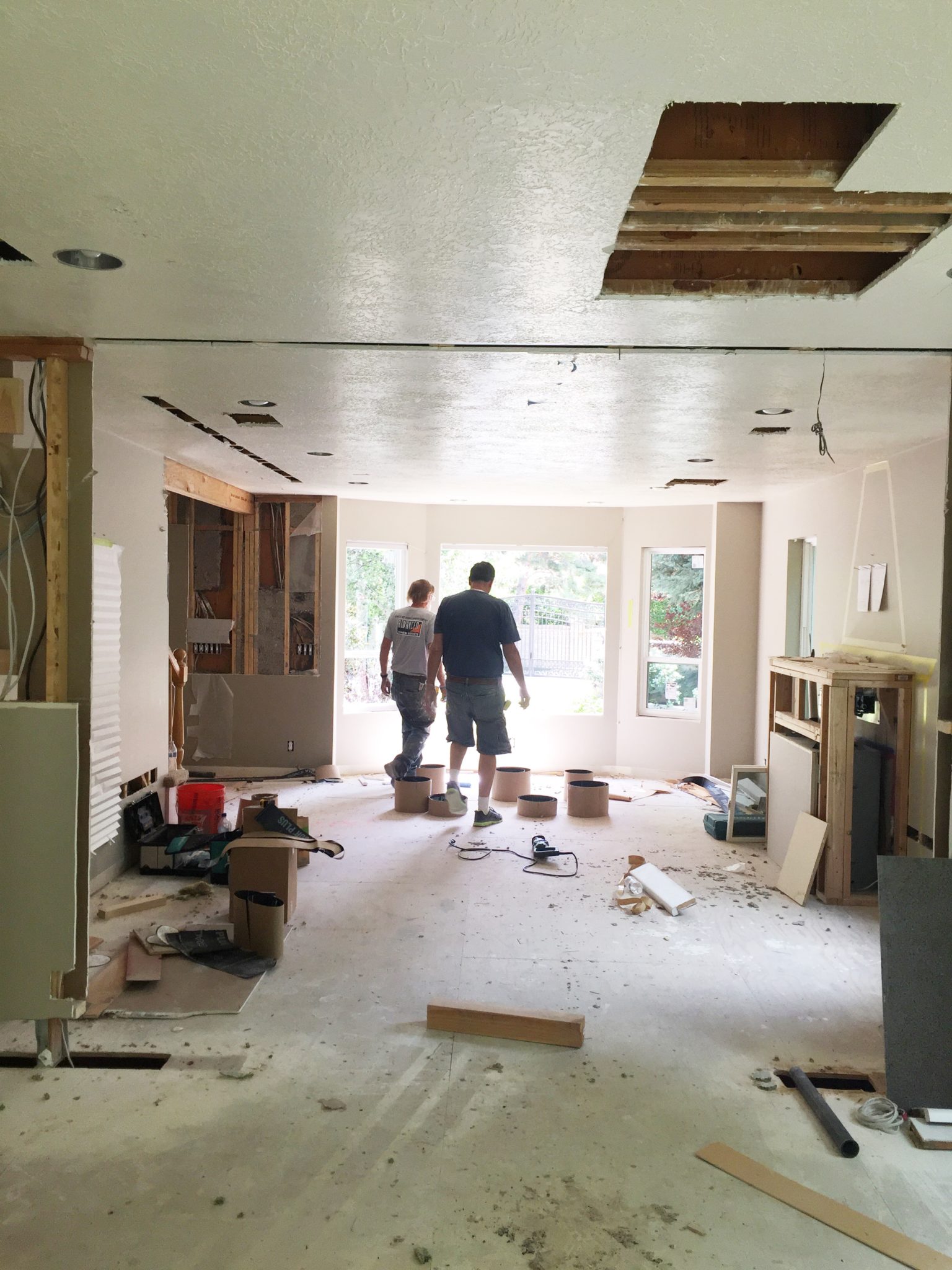 1 thought on “Installing New Windows in the 1987 Fixer Upper”