Guys, can I just tell you how much fun I am having working with Oriental Trading these days?  When they emailed a few months ago and said hey…it’s Friday the 13th in September….let’s get our skeletons out of the closet and party, I couldn’t help but jump on board.  They are introducing a bunch of cool, unique skeletons for the Halloween season (and you know how much I love Halloween!!) I really wanted to build something around the mermaid skeleton.  Ash is a little leery of creepy things, so I knew that creating some fun Pirate party ideas with a girly twist would be right up her alley.  Especially if it involved a lot of pink! With Halloween right around the corner, I whipped up some fun Pirate party ideas that I hope will inspire all year long.  I added the phrase “Trick Arrr Treat” for this fun pirate Halloween version, but if you change up the saying or just omit it all together, these pirate party decorations can be used year round.  Affiliate links are included in this post. 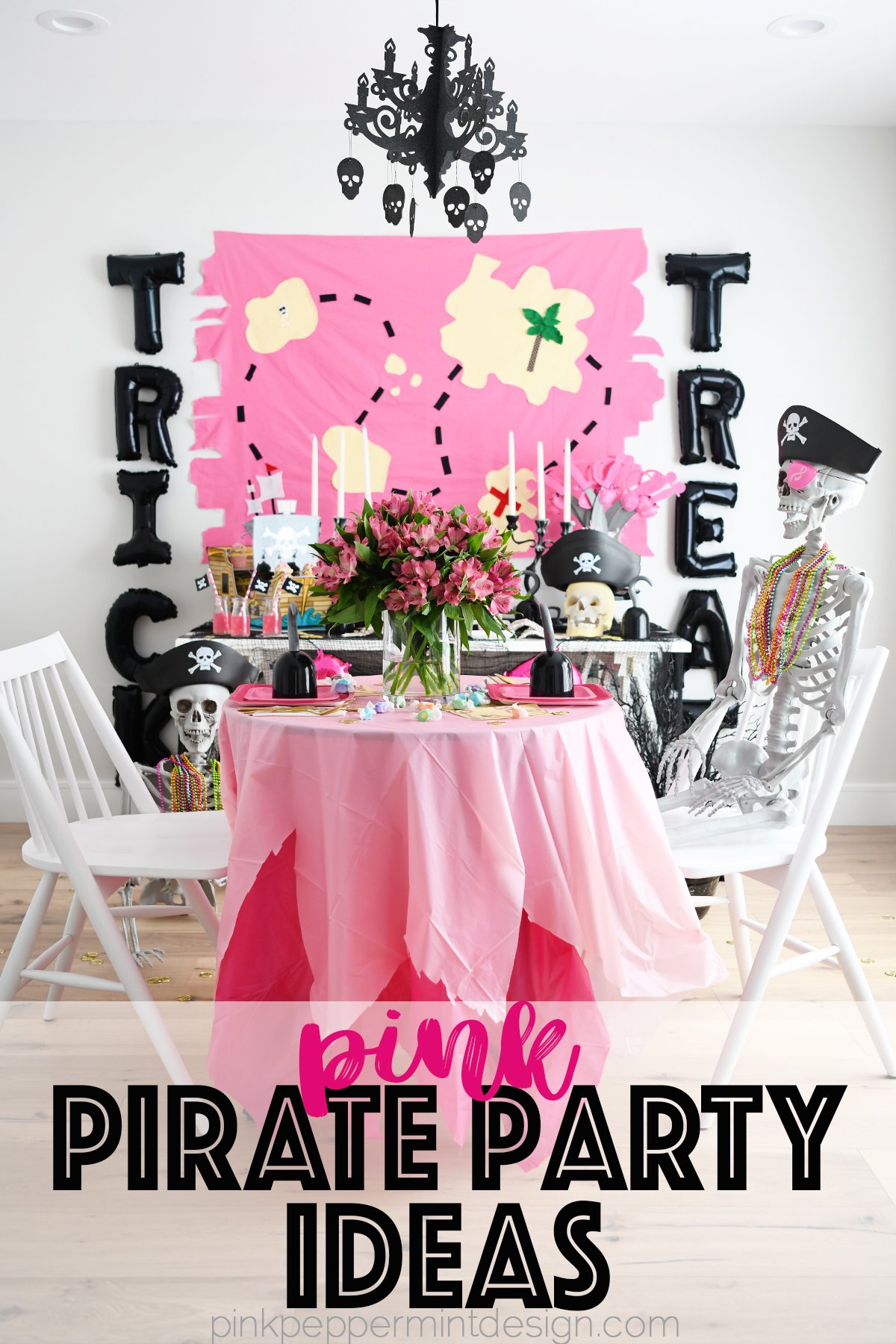 I wanted this pirate party to have a girly flair so I went with lots of pink and some very feminine pirate decorations.  Jewelry in the form of ring pops, candy necklaces and Mardi-gras beads, an awesome black glittered skull chandelier (new this year to OTC), pink pirate accessories, and of course the mythical mermaid skeleton.  Flowers were the perfect touch on the party table. 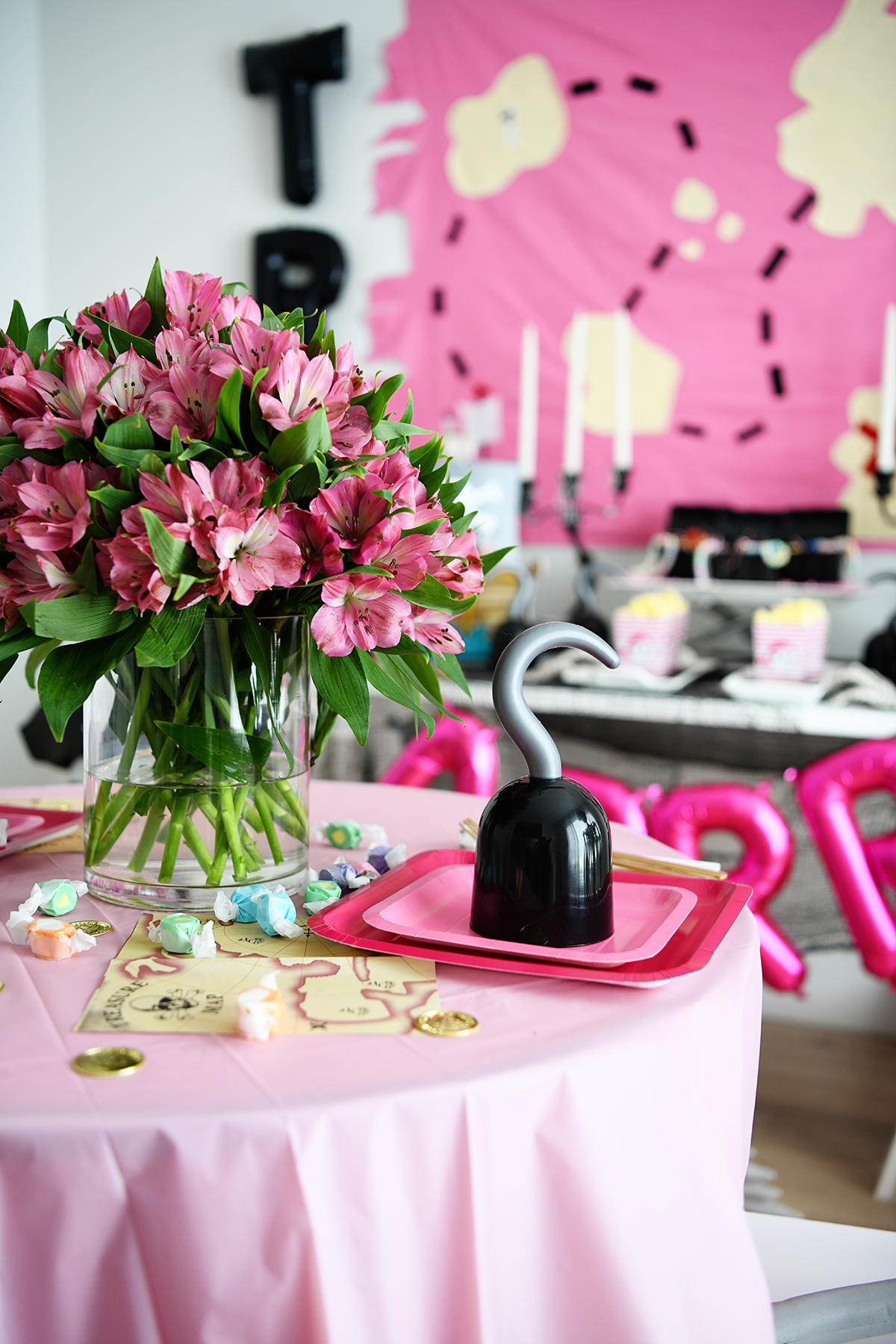 When I think about pirates I think of Pirates of the Caribbean, skeletons sitting proudly atop piles of jewels and treasure, opulent lairs, and lots of excess.  I also think of tattered fabric and treasure maps.  I wanted these Pirate party decorations to reflect all of that.  For the guest table, I created a fun look by layering plastic tablecloths.  I took my scissors to them and made the ends look tattered, and helped the dark pink to peek out from the light pink.  It took me about 5 minutes to whip up these tattered table cloths, and I think they add a LOT to the look of the table and are a super simple DIY.  No need to have a pattern, just cut where you see fit. The more jagged your lines, the better. 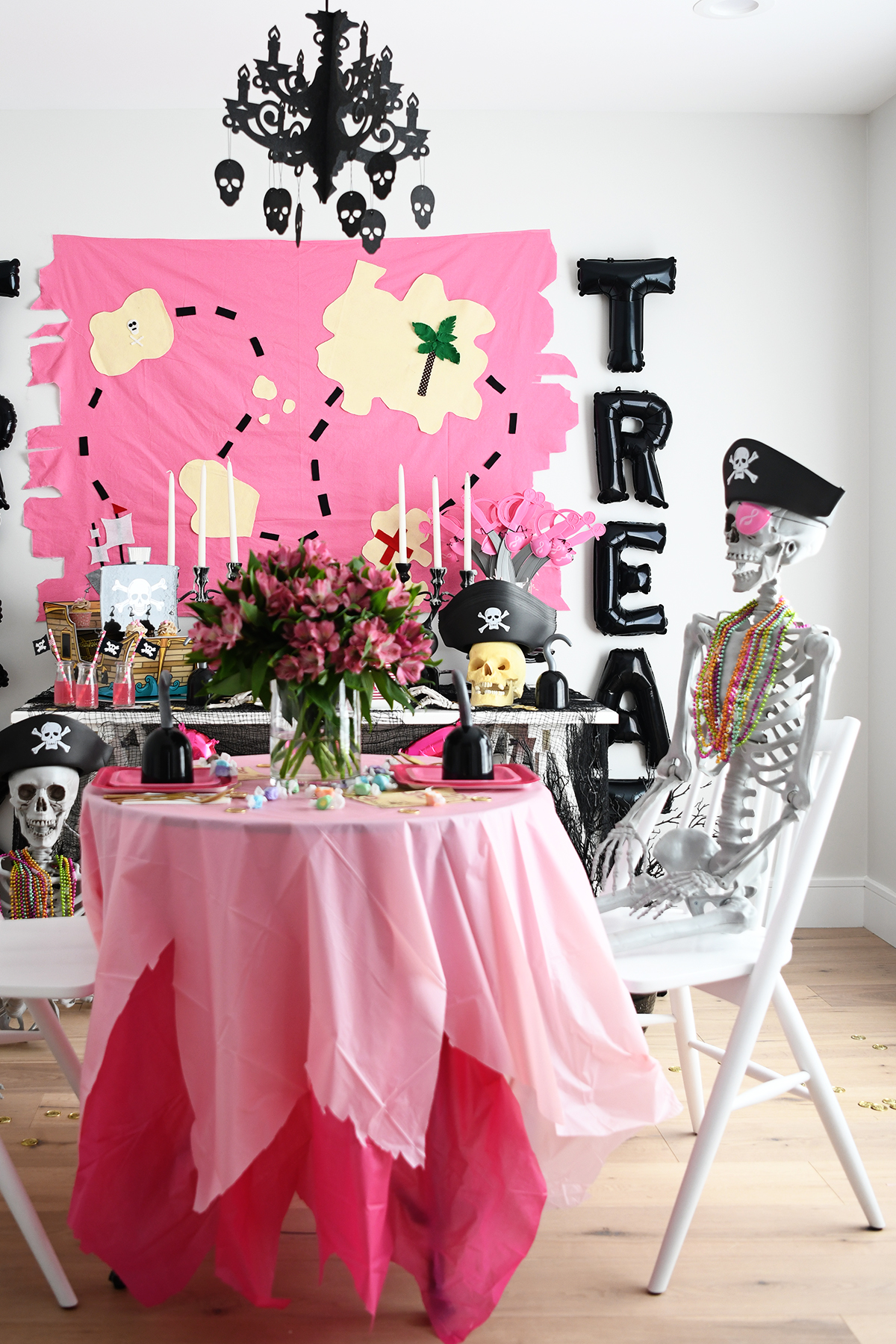 I added these treasure maps, layered paper plates in different shades of pink and gold silverware…all topped off with a cute pirate hook.  I scattered candy and gold coins around the table too. 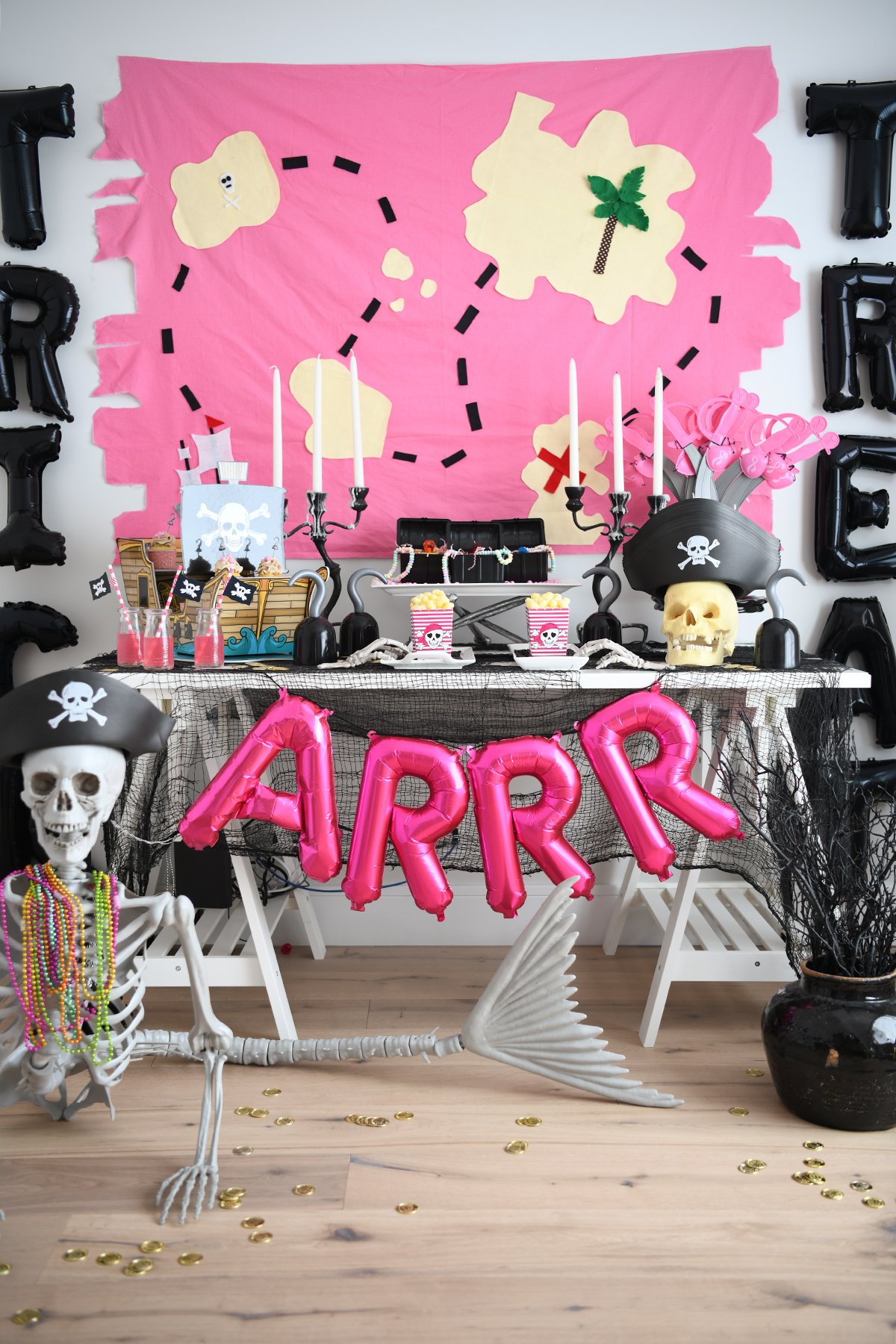 This pirate party is to celebrate Halloween, so this cute “Trick or Treat” balloon banner was a must…and then I changed it up a bit and replaced the “OR” with a few individual letters to say “ARRR” instead..to fit in better with the whole pirate theme.  I used a similar banner a bit ago for another party which had much smaller letters.  I made the mistake this time of assuming the banners were the same size.  When I blew the first letter up I thought, WOW!  They were quite big.  I had initially thought I would place the banner over the treasure map backdrop, but once I saw them I knew they needed to line the sides of the table instead.  I actually like the way it turned out better.  Funny how that happens sometimes! 🙂 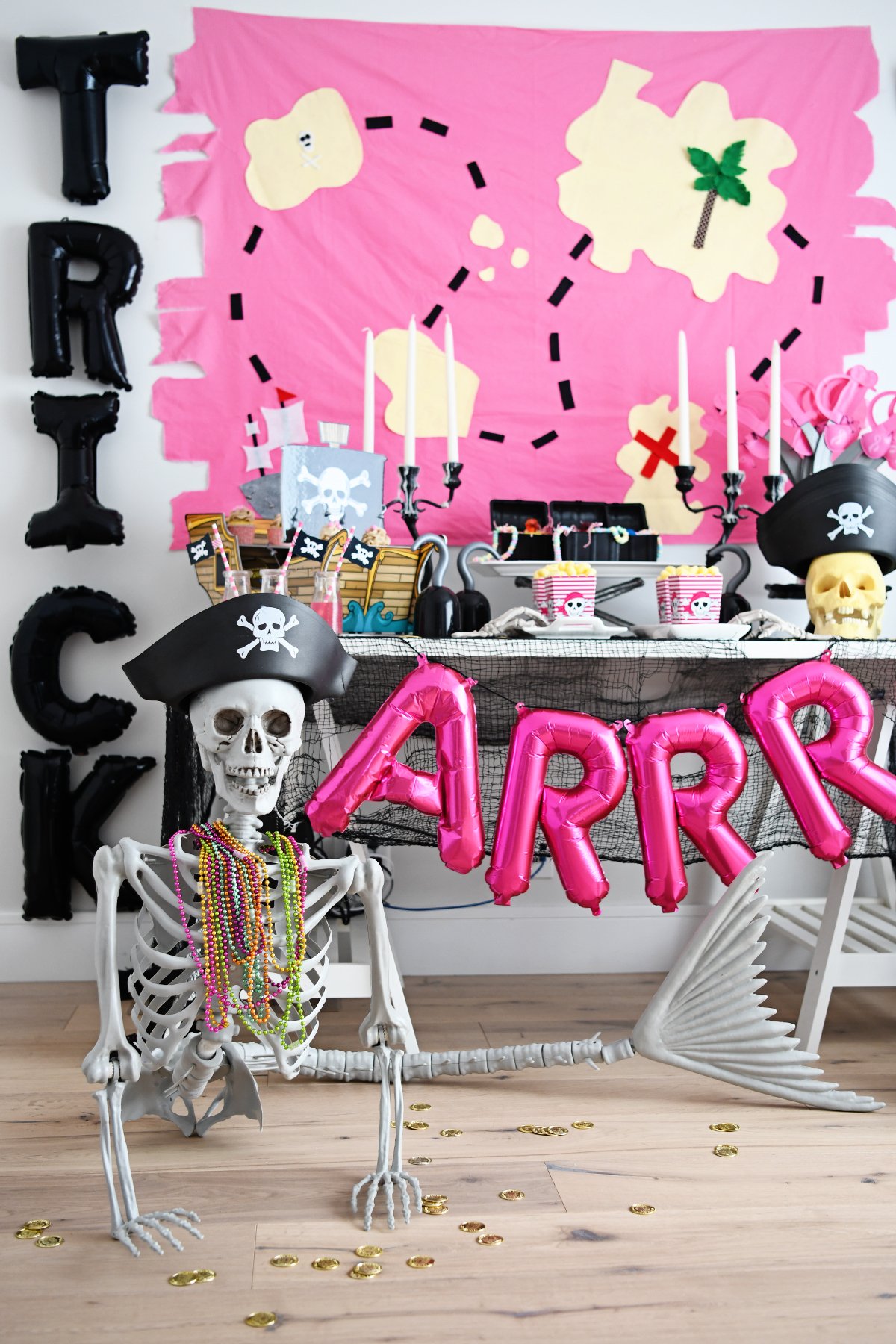 This awesome mermaid skeleton is so large, I knew I needed to carry the decor all the way to the floor here so she could have a place to spread out and show off that great fin.  I draped her in beads and spread gold coins on the floor too, to give the appearance of the scene overflowing with treasure. 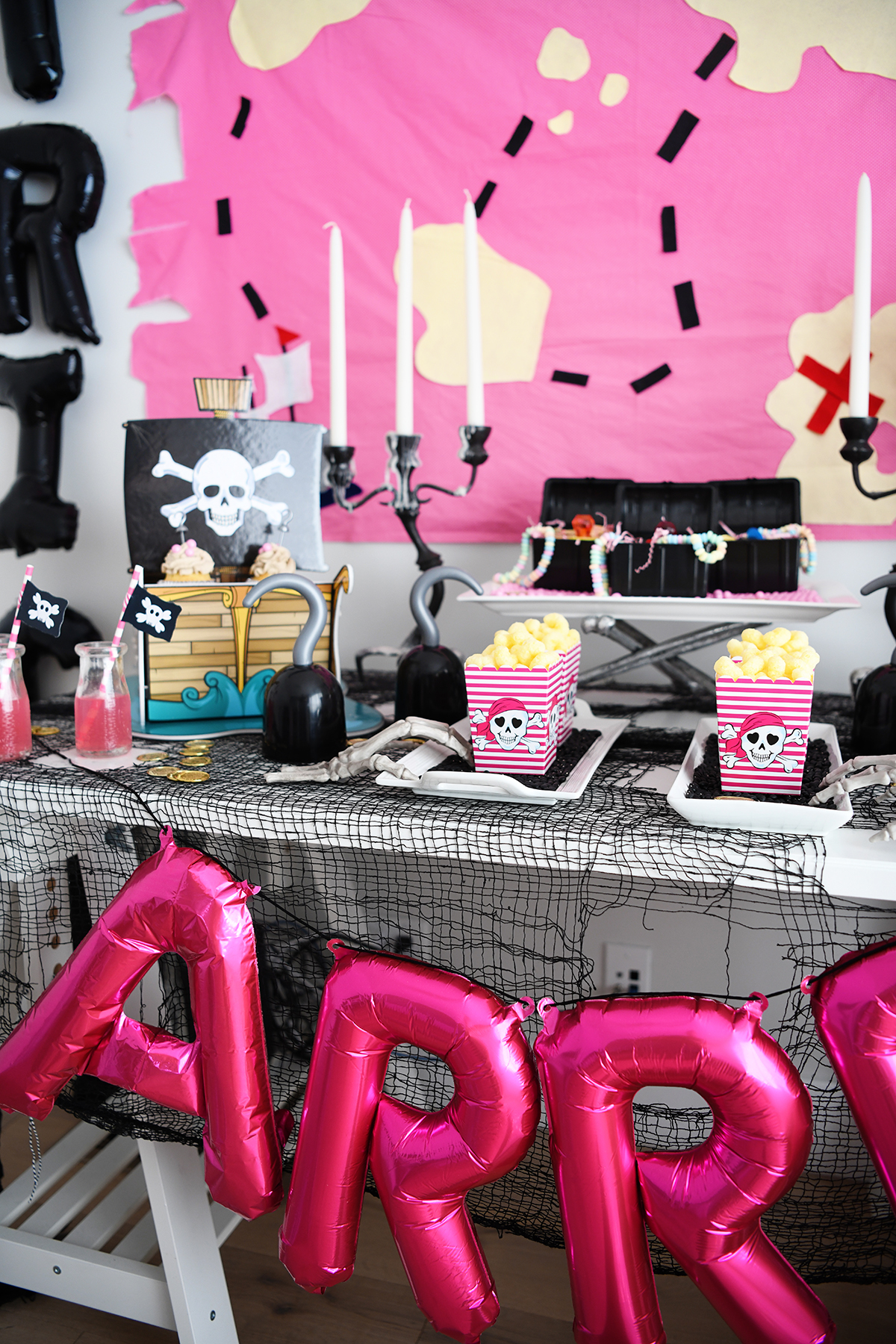 For the food table I wanted a fun backdrop.  I had a few yards of pink fabric lying around and some felt, so I whipped up a treasure map.  This is another SUPER easy DIY pirate decoration.  I simply cut up the side of the yard or so of fabric, and then free-handed some felt pieces…islands, a palm tree, a pirate ship, a red “x”, a skull and some black strips to create a path.  Once I had all of my pieces, I simply hot glued them onto the fabric.  This project took me literally under an hour and I think it makes SUCH a statement on the wall.  If you aren’t comfortable free-handing the pieces for the map, do a google image search for the things you want to include like “cartoon pirate ship” or “pirate skull”, print them out and use them as a template.

A pirate party is more fun if everyone is dressed like a pirate, so as part of the party decor, I added these great foam pirate hats, some pink swords and eye patches, pirate hooks, and of course the beaded necklaces for each guest to grab and wear throughout the party. 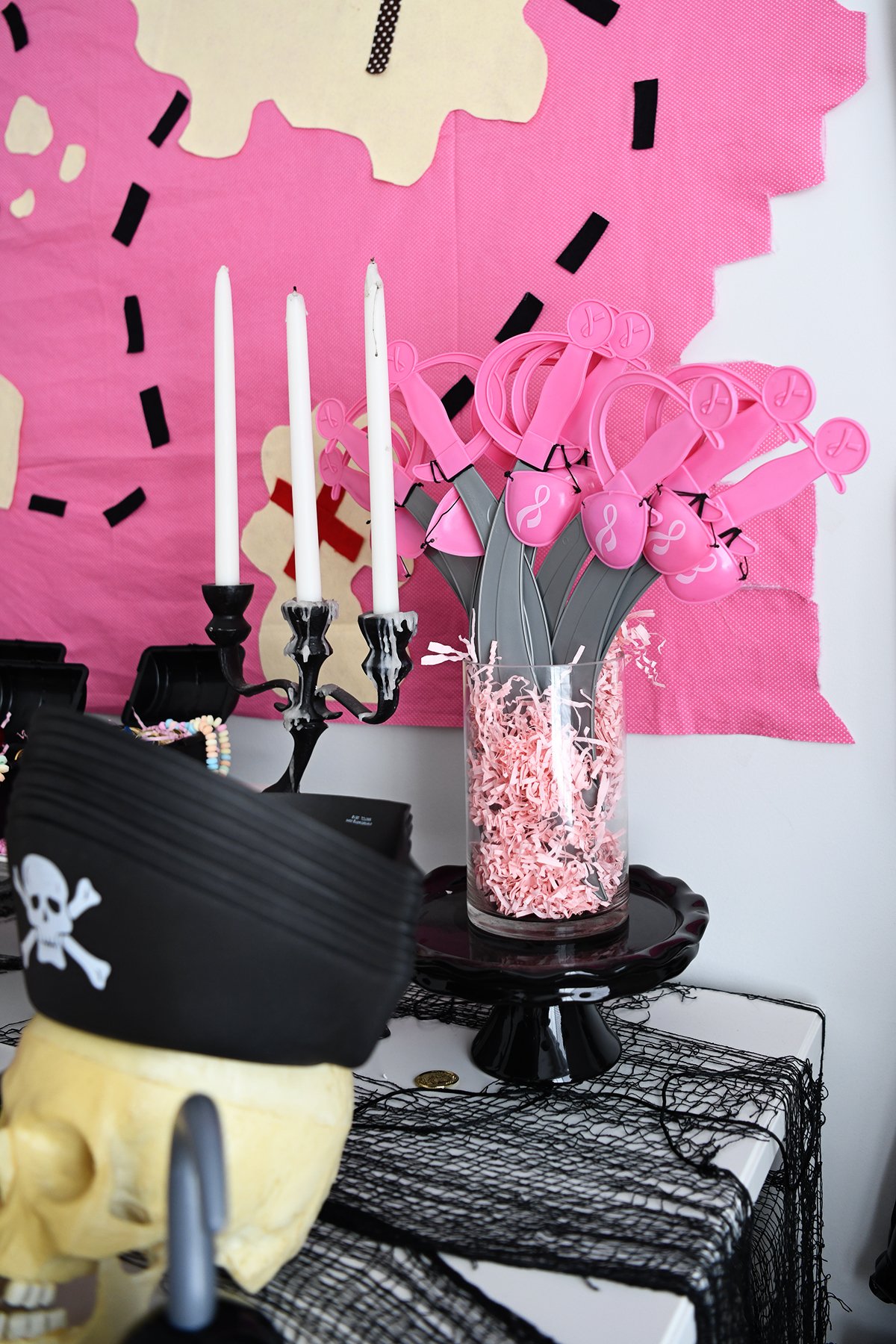 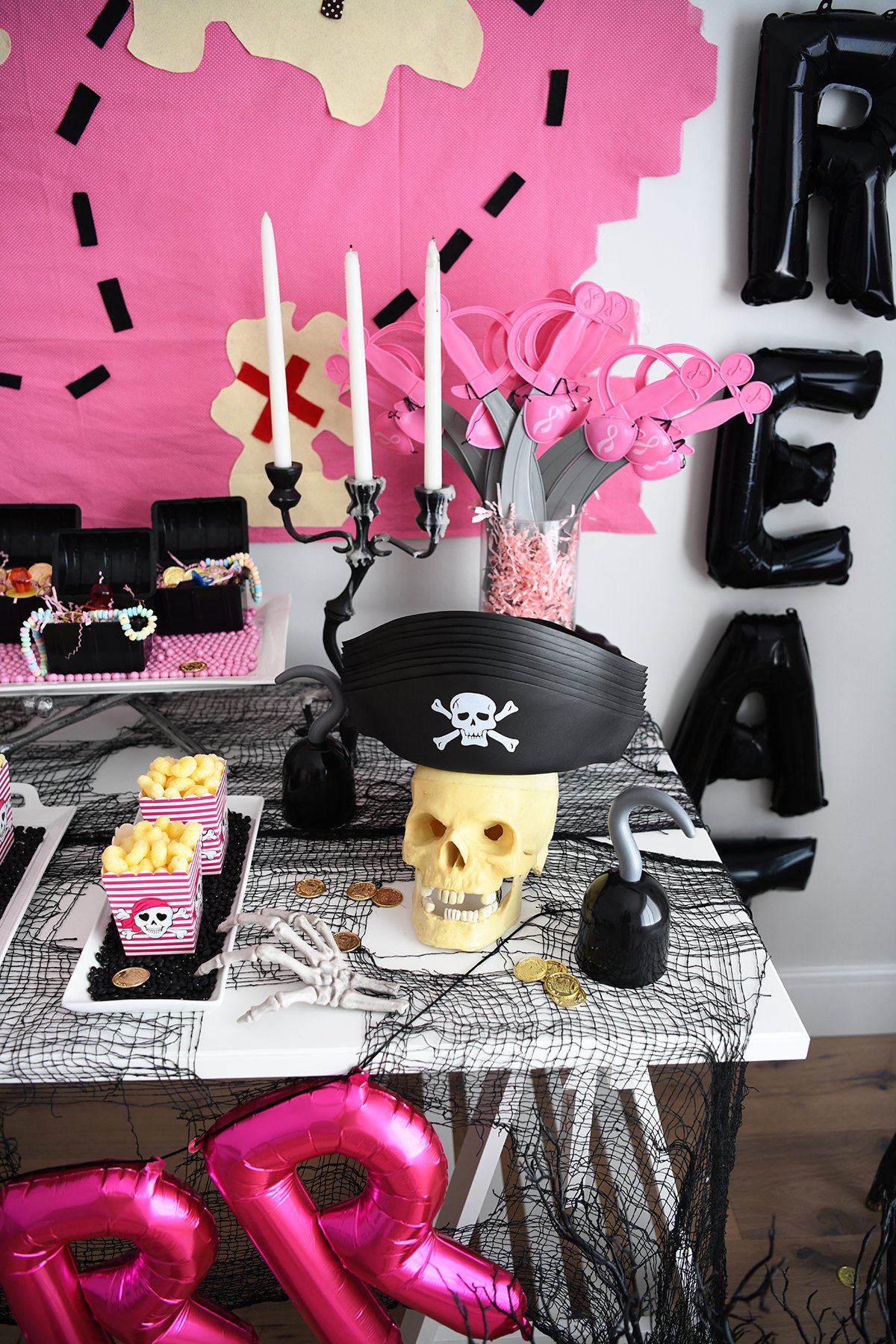 These tattered black pieces of cloth made an easy tablecloth, and I scattered more gold coins and skeleton pieces around the table.

The food for this party is super simple.  Drinks, cupcakes and a few snacks and candy.  That is more than enough for guests to munch on. Pirate’s booty is a no brainer for a quick and easy snack that guest are sure to love.  I put it in these cute pink pirate party boxes making it easy to grab and walk around if the guests want. 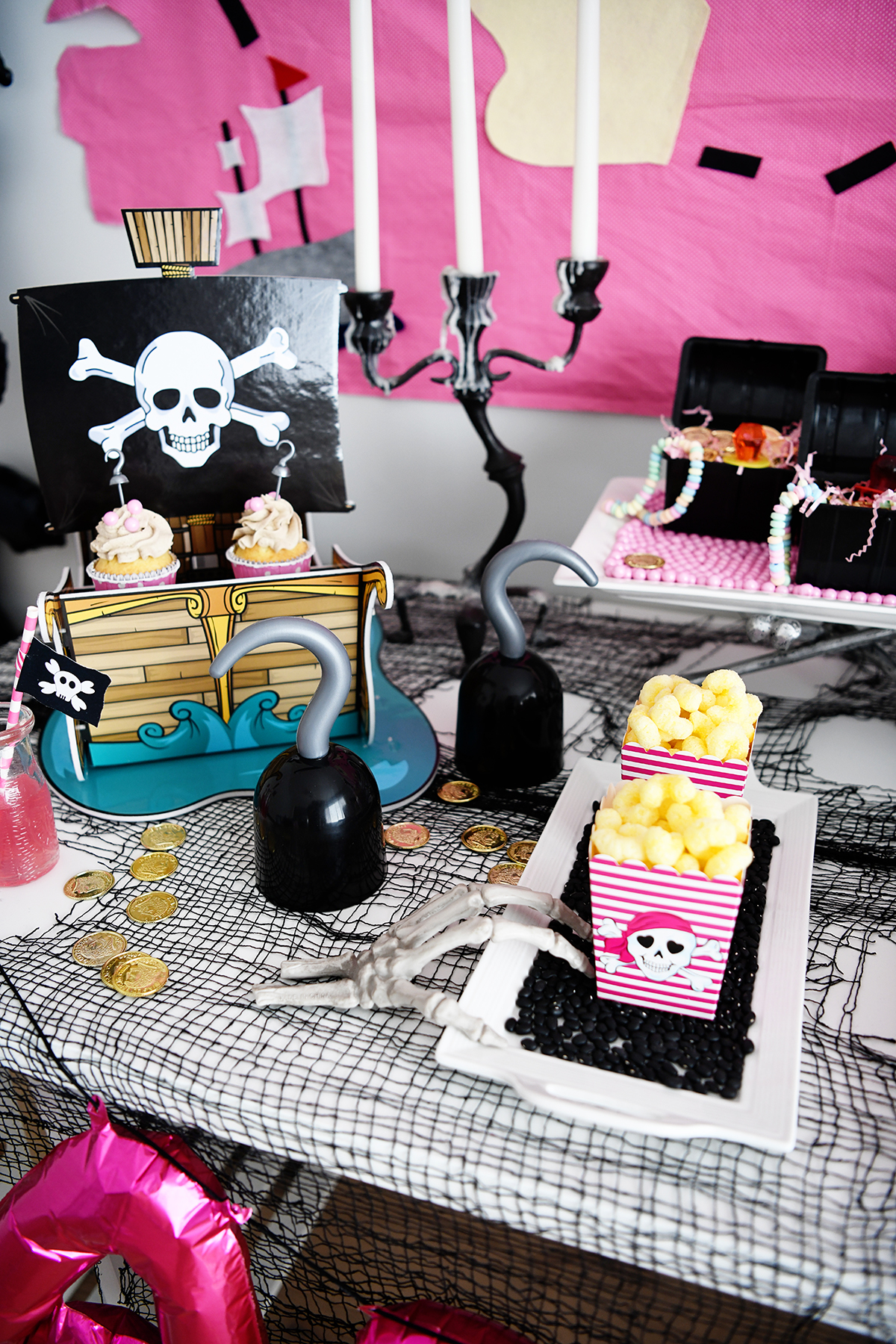 When I saw this adorable pirate ship cupcake stand I knew I needed it for this table!  I love the bit of whimsy it adds to the overall decor and it is super sturdy and easy to put together.  I ordered these party picks that look like swords to use as cupcake toppers and added a few pink pearl sixlets to the top of each cupcake to make it look like treasure. 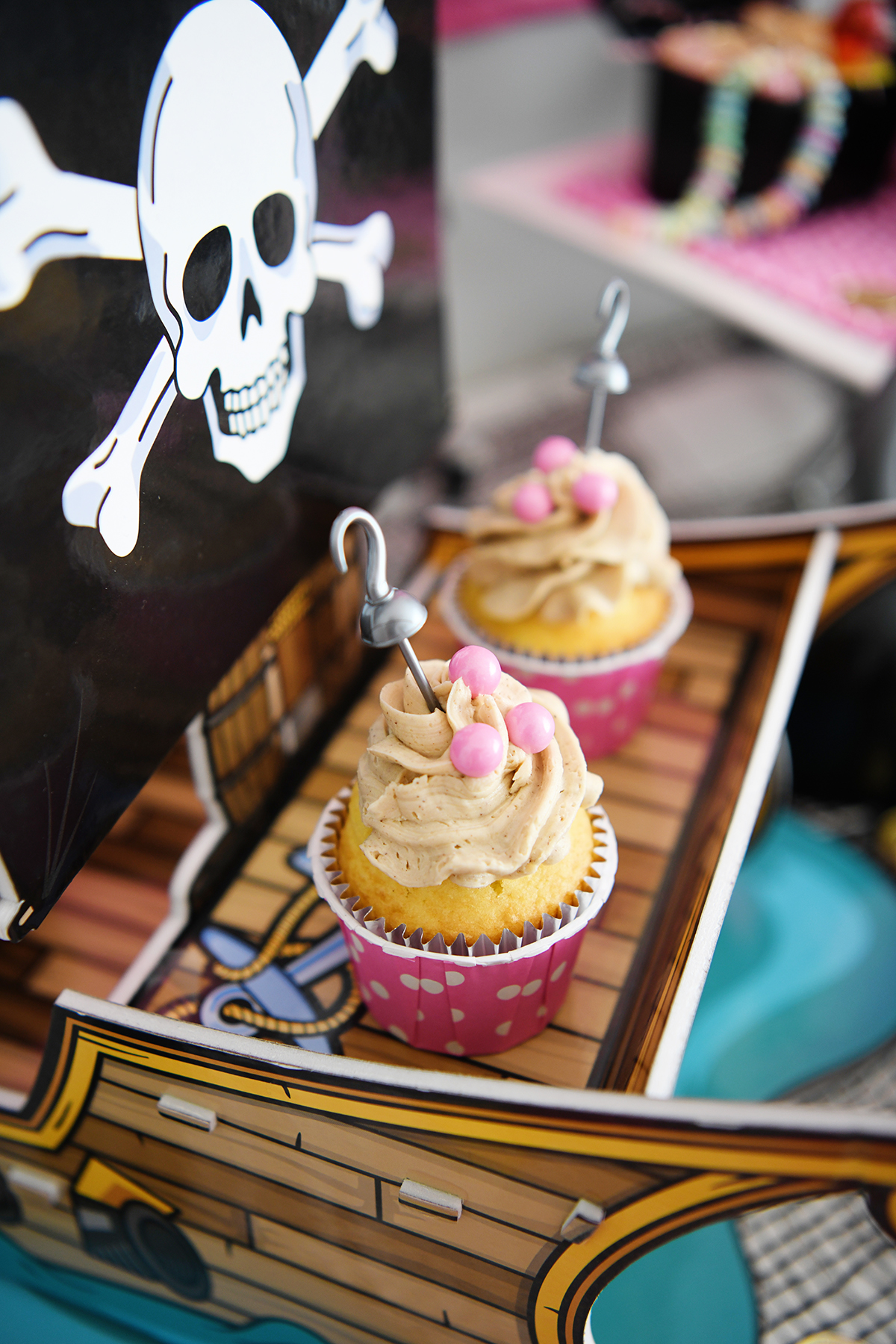 A pink punch or pink lemonade is an inexpensive drink option and fits with the theme perfectly.  I added some cute paper straws and these printable pirate flag straw toppers I made that you can download for free when you sign up for our newsletter here: 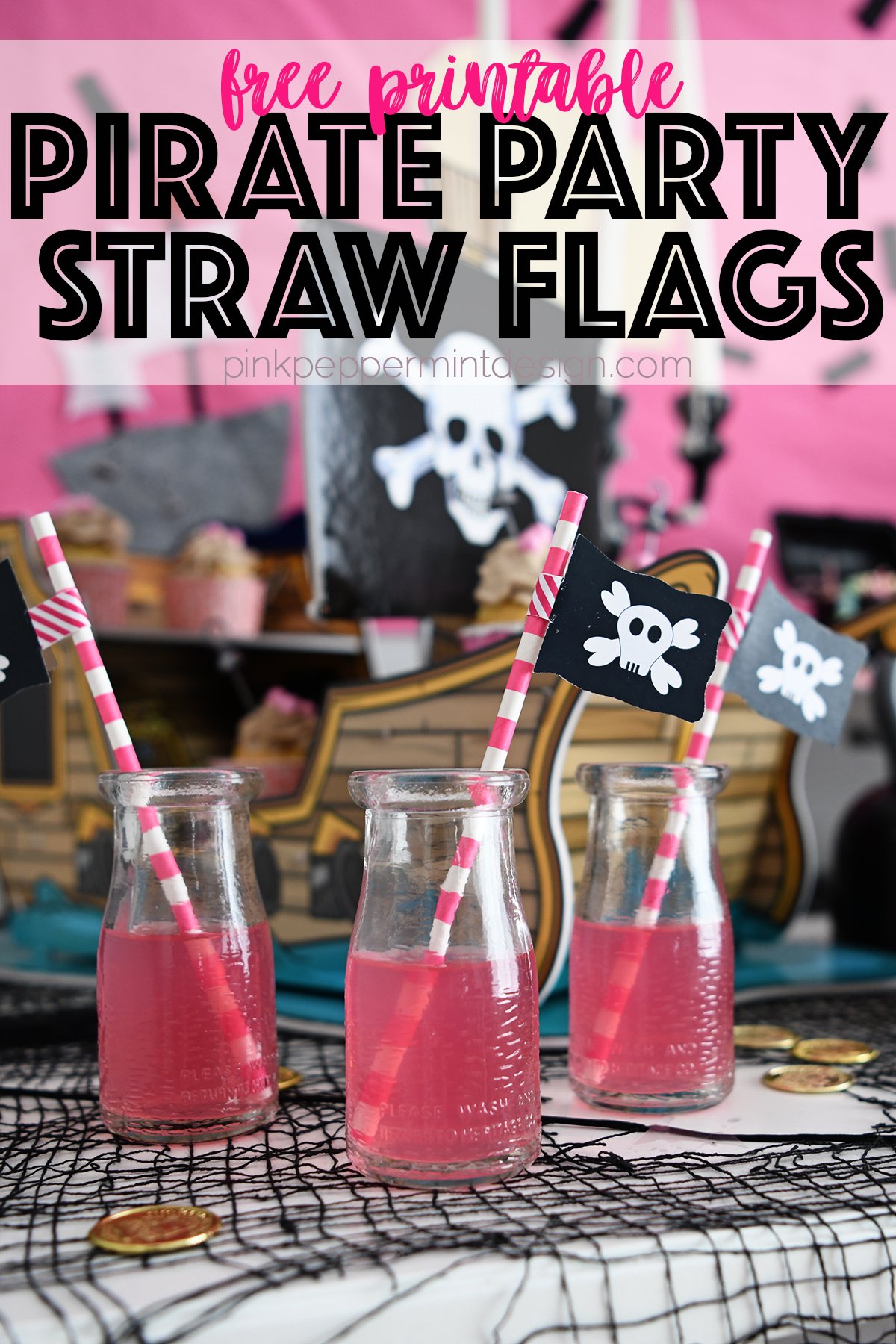 These little black treasure chests are the cutest and make a great pirate party souvenir.  I simply added some pink tissue paper shred, ring pops, candy necklaces, and gold coins.  You could definitely make them chocolate coins for added fun.  Let your party favors double as party table decor to get more bang for your buck.  Each kid can grab a treasure chest at the end of the party to take home. 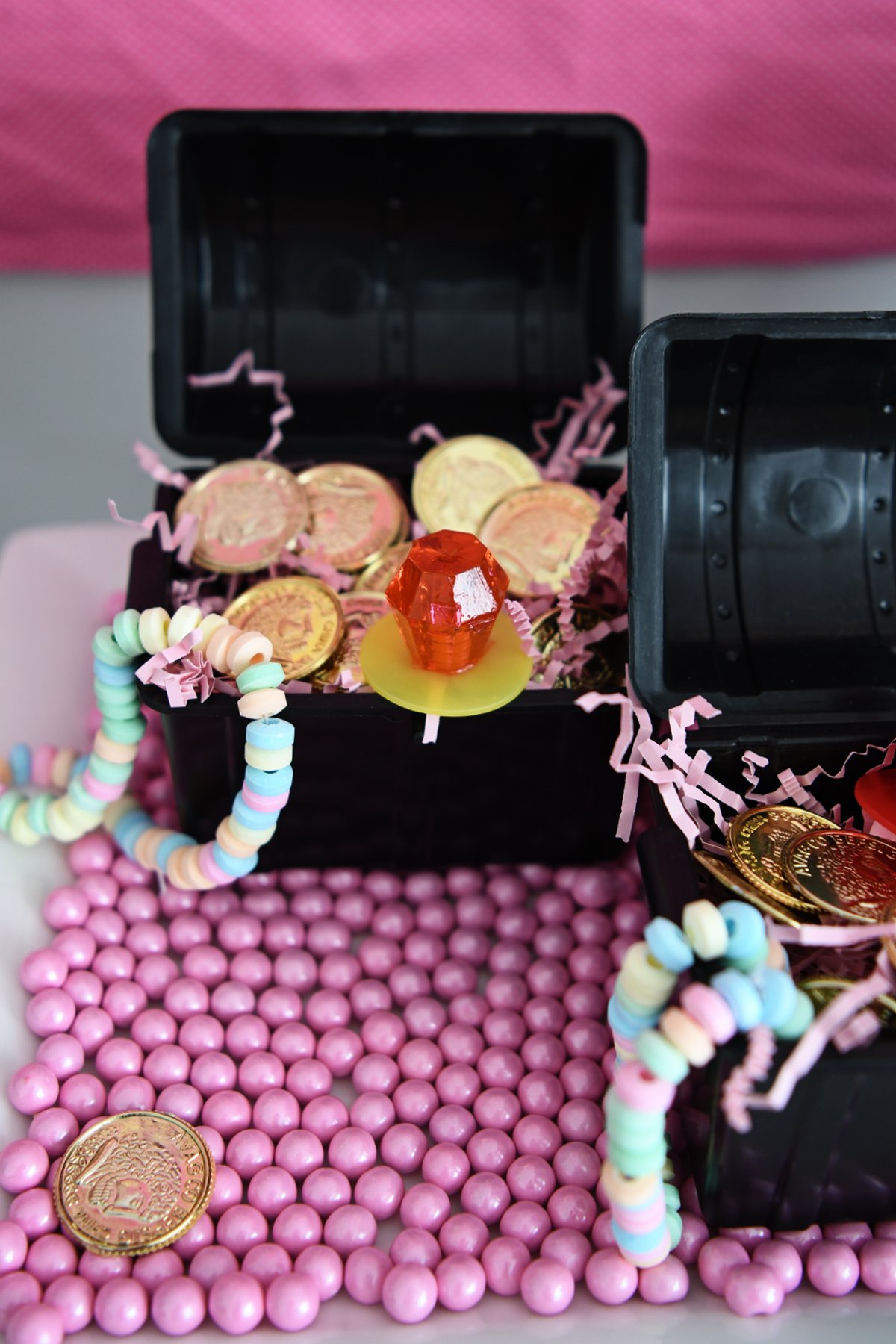 Well, there it is!  The pink Pirate party.  What do you think?  I might be biased, but I think it’s pretty fun. 😉

Did you know we have an entire entertaining gallery with everything from birthday parties to baby showers, holiday gatherings, weddings, and more?  Here are a few of our most popular parties that have been featured in several publications.  You can find the entire gallery here.

Thank you so much for visiting.  I hope you will come back often.  Have you signed up for our newsletter?  Don’t miss out on getting all of the latest from Pink Peppermint Design delivered right to your inbox.  Click here to subscribe to our newsletter.  and get access to our entire library of over 50 free printables! And, if you’re on Instagram, Facebook, and Pinterest come join me there too.  I love to share tons of daily inspiration.